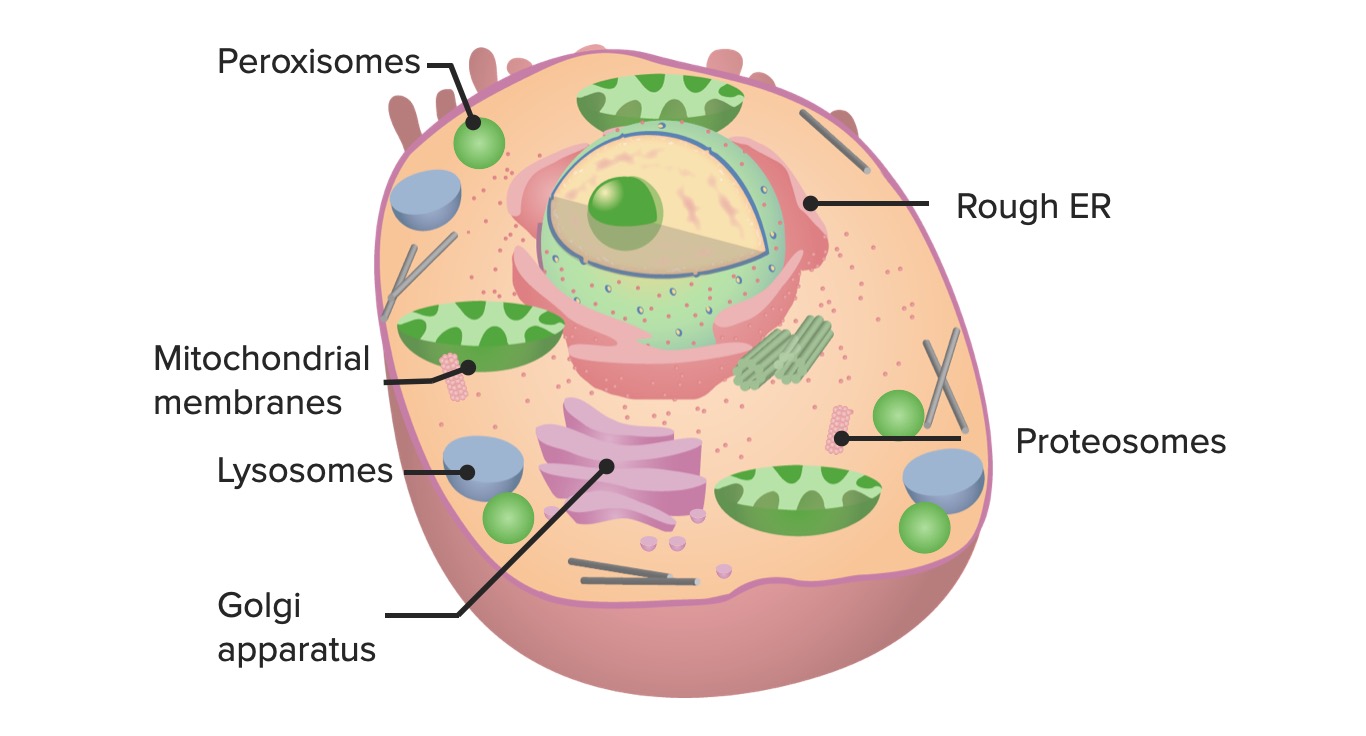 00:00 Okay, the next topic we're gonna look at is synthesis. 00:05 That is all of our proteins that are constantly turning over or being made for export need to be tightly regulated and plus, there are always errors on how we make them, so, let's talk about that. 00:18 So, this is where we are in our timetable of basic cell housekeeping functions. 00:25 We're talking about synthesis. 00:27 So, many of you, most of you I would guess are familiar with endoplasmic reticulum. 00:32 It's tightly applied to the nucleus as we can see here and it sits right outside of the nuclear membrane. 00:40 It's composed of two parts, the rough endoplasmic reticulum and the smooth endoplasmic reticulum. 00:46 And they are all one organelle, just that the rough ER has got ribosomes and is actively synthesizing protein and the smooth ER, well, it's got other functions that we'll talk about later on in this talk. 00:59 This is not probably a foreign concept to most of you and we'll quickly go through this because there are a couple elements that might be not as familiar to you and we need to talk about them. 01:10 So, we have in the nucleus an RNA polymerase translating and making new messenger RNA. 01:18 That's gonna go out the pores, into the cytoplasm and then, we're going to have that interact with ribosomes and when that interacts with ribosomes and you make the appropriate signal peptide, that will bind the ribosome and the new messenger RNA to the rough endoplasmic reticulum and we will translate that message across the membrane and put it into the rough endoplasmic reticulum. 01:46 So, the proteins that are synthesized in the rough ER are going to be either for organelles or for export. 01:54 The stuff that is synthesized on free ribosomes is going to be for the cytosol. 01:59 So, there's kind of two compartments there. 02:01 In any of that, we're making proteins, we're translating them and they're getting into the center of the rough ER. 02:10 That protein is being made and hopefully is being folded appropriately but it doesn't happen in many cases spontaneously. 02:18 It requires additional proteins that live inside the rough endoplasmic reticulum called chaperone proteins and there are a whole variety of them but they're going to bind and guide the appropriate folding of proteins that are newly synthesized and that's very important editing that if not done properly leads to all kinds of problems as we'll see in a subsequent slide. 02:43 Once we have synthesized your proteins, we have to collect them. 02:47 It's not just any collection but we tend to collect them depending on where they're going. 02:51 If they're going to a mitochondria, we may put them in a mitochondrial destine vesicle. 02:56 If they're going to the plasma membrane, they're going to in a different vesicle and they're getting there via the microtubules that are going off with their bound cargo from the golgi apparatus. 03:09 Okay, so, we will get vesicles going to other organelles or to the plasma membrane. 03:14 What happens if you don't fold proteins correctly? Again, there are tons of details on this particular slide. 03:23 Do not worry about the names but do look at the cool concept that's going on here. 03:29 So, you either fold proteins properly or the cell dies and this is called the endoplasmic reticulum, ER stress response. 03:39 So, there are a number of proteins that are in the membrane of the ER and they are doing a variety of very cool things. 03:45 Let's see what happens. So, one, the PERK protein is sensing of misfolded proteins. 03:51 That's actually kind of an interesting concept if you think about it, how do you know that's a misfolded protein? The answer is we don't in most cases and maybe you don't have the appropriate disulfide bond and the appropriate loop but we don't know but somehow, this protein, very clever, senses that the protein is misfolded. 04:10 When that happens, a number of important events downstream occur. 04:16 One is the synthesis of more chaperones. 04:22 So, maybe, "Gee, we just didn't have enough chaperones to guide the folding in the first place, let's make some more and maybe that will help the proteins fold more appropriately." So, that's one outcome once we sense the proteins are misfolded. 04:34 Another one is that we say, "Hold the presses. 04:37 We're not gonna make new proteins until we get this figured out." So, it will actually inhibit protein synthesis at least transiently. 04:45 So, that seems appropriate as well. 04:47 And another one is, "Ugh, everything is so messed up. 04:51 We're not gonna be able to have this cell behave appropriately or make the right kind of protein. 04:57 We might as well just kill ourselves." So, that's the induction of apoptosis. 05:02 And that truly does happen in a number of diseases where there's a mutation or protein that misfolds, we actually end up with cell death. 05:11 So, alpha-1 antitrypsin deficiency. Not one we're gonna see right now but that's one where we have induction of apoptosis as a consequence of a misfolded protein. 05:21 Okay, and then, we're going to also, other proteins are going to inhibit protein synthesis and/or induce apoptosis, so, they're a whole host of proteins in the ER whose job is mainly to make sure that we edit things appropriately and if they're not appropriate, we either fix it or we commit apoptosis.

Which of the following synthesizes the proteins that are released into the cytosol?

Which of the following is part of the endoplasmic reticulum response to misfolded proteins?

Which of the following is responsible for sensing misfolded proteins?

I love the way he simplifies the concept This helped me. Thank you

I love the way he simplifies the concept This helped me. Thank you