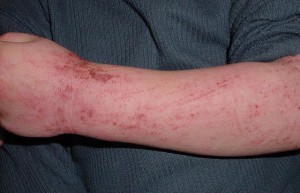 Atopic Eczema (Atopic Dermatitis) in Children — Causes and Treatment
Atopic dermatitis is a common condition in children that is characterized by atopic eczematous skin rash that is highly pruritic. Children with atopic dermatitis might have other autoimmune disorders, such as asthma and food allergies. The diagnosis of atopic eczema due to atopic dermatitis in children is a clinical-based one with little value of laboratory investigations. Once the diagnosis is confirmed, treatment mainly consists of skin rehydration, avoidance of the possible allergens and immunosuppressive therapy in more severe cases.
read more
Load more
Share
Ask Questions
Take Notes
Download Slides
Report Mistake
Comments
show all Show less
My Notes
show all Show less
Learning Material 2
show all Show less
Report mistake
Transcript
0 of 0

The lecture Eczema in Children by Brian Alverson, MD is from the course Pediatric Dermatology. It contains the following chapters:

All of the following are treatment options for eczema, EXCEPT?

While suspecting a child with eczema, history of which of the following should be considered?

Which of the following is true regarding the presentation of eczema in infants below 2 years?

What is the usual location of rashes of eczema in older children?

A patient with an itcthy skin lesion mostly on the trunk and face was brought in by a mother. You are suspecting eczema. Which of the following tests is not used in the diagnosis of eczema?

Author of lecture Eczema in Children

Does a great job summarizing the information, succinct, easy to understand. The oder in which the information is presented makes it easy to remember.

Does a great job summarizing the information, succinct, easy to understand. The oder in which the information is presented makes it easy to remember.