DNA Replication
The entire DNA of a cell is replicated during the S (synthesis) phase of the cell cycle. The principle of replication is based on complementary nucleotide base pairing: adenine forms hydrogen bonds with thymine (or uracil in RNA) and guanine forms hydrogen bonds with cytosine. Replication occurs prior to cell division in the S phase of the cell cycle in order to allow 2 sets of chromosomes to be present during the metaphase of mitosis, after which they are equally partitioned into 2 new cells during separation (anaphase).
read more 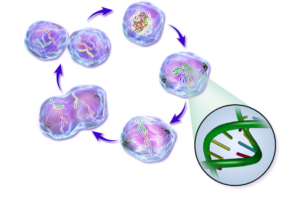 The Cell Cycle: Regulation, Apoptosis, Mitosis and Replication of DNA
This article explains the semiconservative replication of DNA and the role it plays in the cell cycle. The phases of the cell cycle and mitosis (prophase, metaphase, anaphase, and telophase) as well as the regulatory mechanisms associated with cyclins and their antagonists are all relevant topics in medical exams.
read more
Load more
Share
Ask Questions
Take Notes
Download Slides
Report Mistake
Comments
show all Show less
My Notes
show all Show less
Learning Material 2
show all Show less
Report mistake
Transcript
0 of 0

00:01 It is said that information is king. But information not only needs to be transmitted but also replicated. That's certainly important for what happens in the cell with respect to its nucleic acid information. 00:13 In this lecture, I am going to cover the replication of DNA and the repair of DNA. 00:20 So DNA replication is a process that is essential for the transmission of genetic information. 00:26 The structure of DNA discovered in 1953 gave clues to how it will be replicated. 00:32 First of all, this DNA molecule is complimentary. 00:35 These bases on one strand form compliments to bases on the other strand. 00:39 There is phosphodiester backbone that holds the individual bases together on one strand, as we can see. 00:46 And the bases project into the middle of what is the double helix. 00:50 Now the base pairing occurring in the center is stabilized by hydrogen bonds, as we will see. 00:56 So, as we will see, there are some significant differences between the systems of replication that involved in prokaryotic versus eukaryotic cells; because, of the nature of the genetic information in the two. 01:08 But the overall DNA replication process itself, mechanistically, is not significantly different. 01:15 Now when we think about DNA replication, at the very beginning of DNA replication it starts at a specific sequence. We have seen in another lecture how transcription of RNA begins at a promoter. 01:27 In DNA replication, the replication process begins at a sequence called an origin. 01:33 Proteins bind to the origin to help the replication process to occur very much like what we saw in transcription except for here the idea is the replication of DNA. 01:43 They will open the double helix to allow the access of the replication proteins to get in and begin. 01:49 The replication requires a "reader" of the template and a catalytic function to make phosphodiester bonds. 01:55 Basically what I am talking about here is a DNA polymerase. 01:59 It reads one strand, grabs the appropriate base, and then incorporates that into the strands that it is building. 02:07 Now there are several proteins involved in the replication of DNA and I'd like to just first list them and then we will see individually what they do later. 02:14 First, there is the DNA polymerase that's involved, as I said, in actually making the phosphodiester bonds to join everything. 02:21 There is a primase that's a protein that actually helps to start the synthesis of the DNA. 02:27 There is something called the single stranded binding protein which as its name suggests, binds to single strands. 02:33 Enzymes called helicases help the process to advance, as we shall see, at an incredible rate. 02:40 An enzyme called topoisomerase helps with traffic jam that happen during the replication process. 02:45 On these traffic jams, literally, can be knots in the DNA if they are not taken care off. 02:51 A primer remover is necessary; because, the primer is where the replication process gets started and, as we will see, that primer start is not DNA. 03:01 In last in the process we have to have something called DNA ligase; because, this is how all the individual pieces of the DNA during replication get joined together.

Which of the following is true of the structure of DNA?

Which of the following statement regarding DNA replication is incorrect?

Excellent intro
By Victoria W. on 10. December 2018 for DNA Replication

Excellent intro
By Victoria W. on 10. December 2018 for DNA Replication