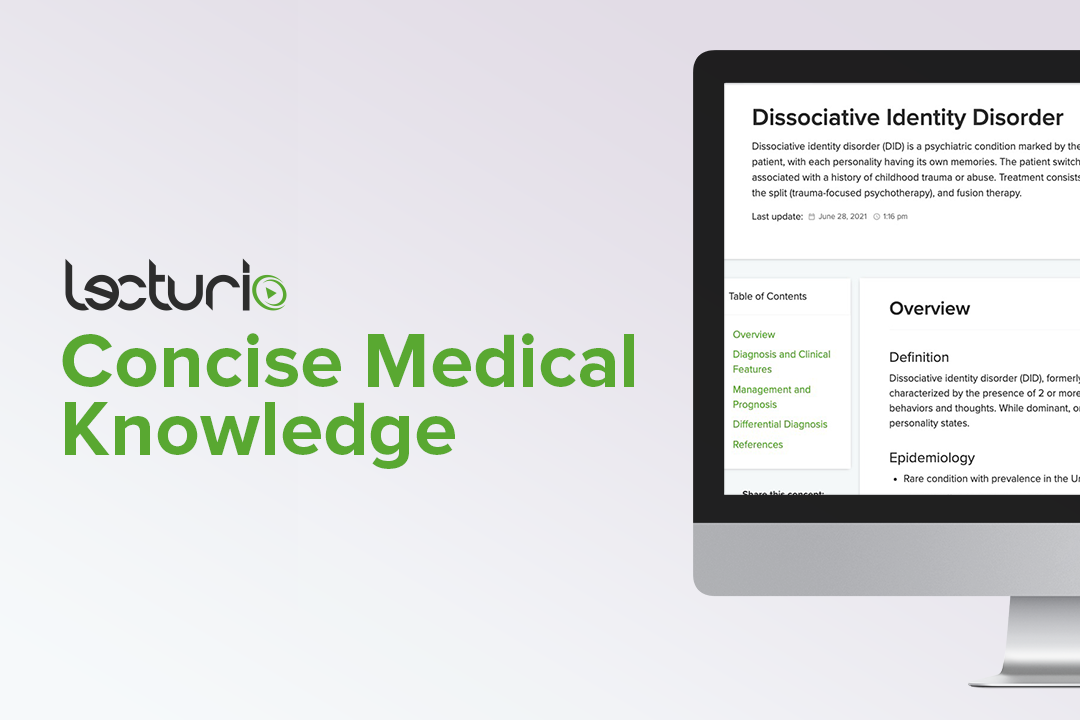 Dissociative Identity Disorder
Dissociative identity disorder (DID) is a psychiatric condition marked by the presence of ≥ 2 distinct personality identities in a patient, with each personality having their own memories. The patient switches between personalities rapidly, especially under stress. Dissociative identity disorder is associated with a history of childhood trauma or abuse. Treatment consists of the identification of the most likely childhood trauma that caused the split (trauma-focused psychotherapy) and fusion therapy.
read more
Load more
Share
Ask Questions
Take Notes
Download Slides
Report Mistake
Comments
show all Show less
My Notes
show all Show less
Learning Material 2
show all Show less
Report mistake
Transcript
0 of 0

00:00 Another dissociative disorder that we’re going to review now is Dissociative Identity Disorder. 00:08 This is formerly known as multiple personality disorder. The presentation in symptoms can mimic borderline personality disorder, which is important to note. It’s actually very controversial diagnosis and it involves 2 or more distinct personalities that alternate and control a person’s behaviors and thoughts. While one personality is dominant, that personality is usually unaware of events that occurred during prior personality states. Now, women tend to be more affected than men. They comprise about 90% of patients who are in fact affected by this disorder. There's a 1% prevalence and it’s higher among patients who are actually already receiving mental health care. Most patients who have a dissociative identity disorder have actually experienced the prior trauma, in particular childhood sexual abuse and the average age for this diagnosis is about 30 years old. There is a high incidence of comorbid, major depression, anxiety, borderline personality disorder and substance abuse. Up to 1/3 of patients with dissociative identity disorder actually commit suicide. The comorbidities include PTSD, depression, substance abuse, somatoform conditions and also personality disorders. 01:42 Dissociative identity disorder, when we think about the pathogenesis, we think of 2 different things. One is the trauma model, which is where we think that maybe someone was exposed to some childhood abuse or sexual trauma that led to splitting off of their personalities in a way to sort of help cope while they endure the trauma and then as they grow up those double or split personalities persevere. Another model is the sociocognitive model and this is where we think that people who are very impressionable and who heresy about dissociative things and movies and books may tend to adopt to this in their own lives. Disruption of identity is characterized by the presence of 2 or more distinct personalities and there are recurrent gaps in recall for these patients. There’s also an alteration in affect, behavior, consciousness, perception, cognition and/or sensory motor functioning for people with dissociative identity disorder. There are other dissociative symptoms. Things like depersonalization, which is the feeling of detachment or estrangement from oneself. There’s derealization, which is a feeling that the external world is strange or unreal. A trance state involves a narrowing of awareness of immediate surroundings. 03:11 Self-alteration is the sense that one part of one's self is markedly different from the other parts of one's self. To diagnose dissociative identity disorder, you must have the presence of 2 or more personality states and keep in mind all of these criteria have to be met for the diagnosis. So, there are recurrent gaps in recall of everyday events and important personal information. 03:38 There is clinically significant distress or impairment and social and occupational functioning. The disturbance is not part of a cultural or religious practice and it’s not due to substances or a general medical condition. So what do you think about when you think of the differential for a dissociative identity disorder? You might think of somebody who’s abusing elicits like cannabis or hallucinogens so they may be intoxicated. What about somebody who has dementia, seizures, or another neurological problem? You’re going to think about general medical conditions that you want to rule out. Somebody who’s re-experiencing an event of voiding situations, having numbing or hyperarousal is of course someone with PTSD and on your differential list will also be that type of patient who’s characterized by frequent cutting, splitting as a defense mechanism, self-harm, and chronic feelings of emptiness. That patient, of course, has borderline personality disorder. You’re also going to include in your differential the patient who has hallucinations or losses touch with reality. So schizophrenia or any type of psychotic disorder. You’re also going to think about somebody with mania or hypomania, so of course that’s bipolar disorder. On your differential you’re going to keep in mind that some people might be feigning symptoms for primary gain which is factitious disorder and others will feign symptoms for secondary gain. Do you remember what that’s called? Malingering. So how would you treat a dissociative identity disorder? Well, this is usually a chronic illness, okay, and it often has an incomplete recovery. Patients with an earlier age of onset tend to have a poor prognosis than those who will develop the symptoms a little bit later in their adulthood. Sometimes hypnosis can work or drug-assisted interviewing, something to help disinhibit the patient to help them speak more freely but more often we use insight-oriented psychotherapy and occasionally we’ll use medications as needed. This is usually reserved if there is a comorbidity present such as something like depression that can be targeted with the medication like an SSRI. So that’s a little bit about Dissociative Identity Disorder, the diagnoses and some treatment options in the event you are to encounter a patient with such symptoms.

The lecture Dissociative Identity Disorder by Helen Farrell, MD is from the course Dissociative Disorders. It contains the following chapters:

Which of the following is FALSE regarding the dissociative identity disorder?

Which of the following is NOT a co-morbidity for dissociative identity disorder?

How does the sociocognitive model explain the etiology of dissociative identity disorders?

Which among the following is NOT a dissociative symptom?

Which term describes a sense that the external world is strange or unreal?

Which of the following statements regarding the management of dissociative identity disorder is TRUE?