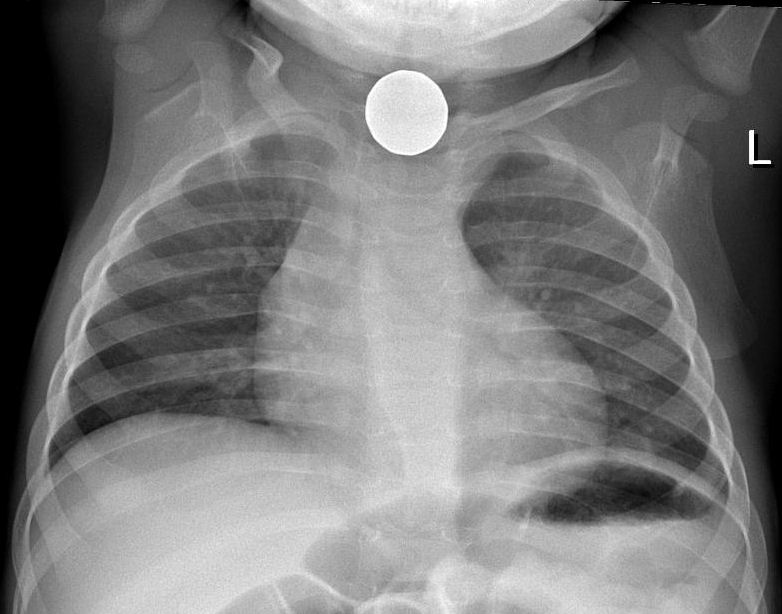 Foreign Body Aspiration
Foreign body aspiration can lead to choking and death by obstructing airflow at the larynx or trachea. Foreign bodies may also become lodged deeper in the bronchi; this may not affect breathing but can cause infection or erosion of bronchial walls. Foreign bodies (FBs) are more frequently aspirated by children, who may present with coughing or wheezing. As FBs are rarely visible on X-ray, other modalities of imaging, such as computed tomography or flexible bronchoscopy, must be employed when prompted by symptoms and clinical suspicion. The relative frequency with which various objects are aspirated varies based on patient demographics. Prompt removal of the FB is the definitive treatment.
read more

00:01 with that or not. And it’s also used when acid-base disorders may be present. 00:01 Right, so moving on from testing lung function, I’m now going to talk about bronchoscopy. 00:07 Bronchoscopy is a test involving an endoscope where we can actually directly visualise the bronchial tree. As you can see here on this picture, that’s the carina of the bronchi breaking off from there further down in the lungs. So you can see if there is a visible abnormality in the bronchial tree. You can also obtain samples from deep within the lung. 00:31 It requires only a degree of local anaesthesia and light sedation. It takes about 15-20 minutes to do. And therefore it’s a very easy procedure to use to access the central airways of the lung. As well as visualising abnormalities, we obtain different types of samples, bronchial washes – which is fluid washed over a bronchial abnormality – brushings – where you get a sort of a wire brush and brush it over the bronchial abnormality – biopsies of the bronchial mucosa, something called a bronchoalveolar lavage – where in fact we get fluid from deep within the lung which represents the alveolus. And, occasionally, we do transbronchial biopsies where we pass the needle through the lung tissue to try and get some interstitial material for the histopathologist to assess for interstitial lung diseases for example. 01:16 And more recently, the mediastinal lymph nodes have been biopsied using ultrasound control. 01:22 This is becoming a routine test now in respiratory medicine. It has made a major advance in our ability to assess what’s going on with mediastinal lymph nodes without doing surgery. 01:33 So we use bronchoscopies when we’ve got somebody with a new lung shadow and we’re worried that it may be cancer, especially is that shadow is in the central area and therefore could be in one of the airways. 01:44 So, for example, this a bronchoscopy photograph. What it shows is a normal bronchus and then, at the end there, there is a tumour which is blocking that bronchus. 01:54 We use it to assess lobar collapse. This collapse of the lobe is due to something blocking the bronchus. And it might be a tumour – as is shown in this picture – or it might be a sputum plug or it could be a foreign body such as an inhaled tooth or something like that. 02:06 We use it for haemoptysis – to investigate haemoptysis because you can actually visualise where the bleeding’s coming from using the bronchoscopy. 02:16 And the samples that we can obtain – the lavages, the biopsies – are useful when you’re diagnosing people with interstitial lung disease and can be used for patients with difficult lung diseases – lung infections such as TB in immunocompromised patients with pneumonia etc., etc. 02:33 The problem with bronchoscopies: well, the main one is actually the patient coughs a loss. You’re passing a thin tube down through their throat and it can make them cough a lot during the actual procedure. And that coughing rubs the back of the throat against the bronchoscope so they often have a sore throat after the procedure. 02:49 More importantly, if you biopsy something it may leak blood and haemoptysis is a potential complication. Usually that will stop but, if somebody has a reason to bleed more – they have low platelets, abnormal clotting – then there’s going to be a major problem with haemoptysis and you have to avoid doing biopsies in those sorts of patients. 03:09 Bronchoscopy requires sedation in general and that can be a problem in patients with respiratory disease because type-II respiratory failure, for example, actually is already a sedating situation. And if you give people sedation in those circumstances, it can exaggerate the respiratory failure. And there’s a temporary decrease in your oxygen during the procedure and that can be a problem with patients who really are struggling to maintain their oxygen levels. Some people get an infection and, if you do a transbronchial biopsy, you can get a pneumothorax in about 10% of people. 03:40 So I’ll talk about the radiology of the lung but I’ll be relatively brief about this because that could be the subject of entire lectures by itself. 03:48 But clearly x-rays are a vital modality for investigating lung disease. And there are multiple various types of x-rays than can be done. But for the lung disease, the most important are chest x-rays and CT scans. We do use ultrasound and radionucleotide scans and magnetic resonance imaging sometimes but, in general, we get away with just doing chest x-rays and CT scans.

The lecture Diagnosis: Bronchoscopy – Lung Disease by Jeremy Brown, PhD is from the course Introduction to the Respiratory System.

Which of the following forms of anesthesia is required to perform a bronchoscopy?