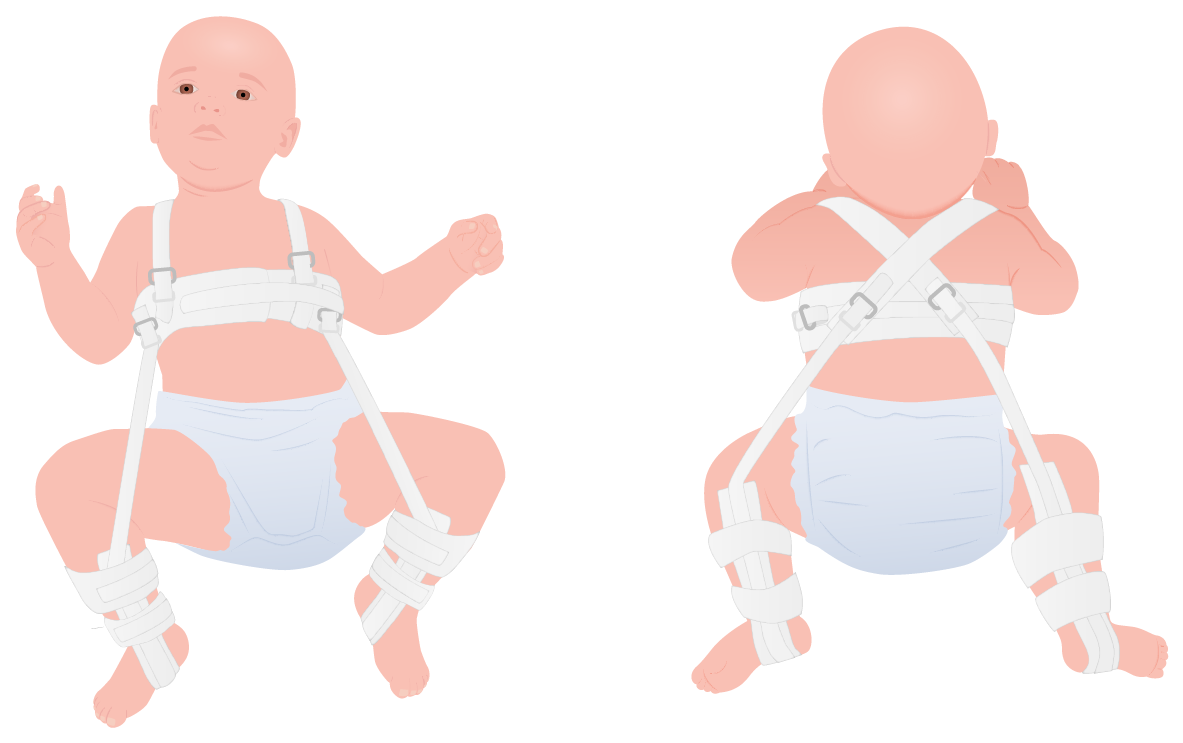 Developmental Dysplasia of the Hip
Developmental dysplasia of the hip refers to a range of disorders of the hip joint characterized by hip instability and resulting in subluxation or dislocation that mostly presents during the first few months of life. The condition is often first recognized due to hip laxity on newborn exam. Developmental dysplasia of the hip occurs most commonly in otherwise healthy girls and often does not have an identifiable cause. Treatment is imperative to avoid complications, such as avascular necrosis of the femoral head and pain with mobility. Management is dependent on the severity and age at diagnosis, with infants often treated with a Pavlik harness and children > 6 months of age often requiring open or closed surgical reduction.
read more
Load more
Share
Ask Questions
Take Notes
Download Slides
Report Mistake
Comments
show all Show less
My Notes
show all Show less
Learning Material 2
show all Show less
Report mistake
Transcript
0 of 0

00:01 In this lecture, we will discuss structural leg problems of infancy. Let’s start with developmental dysplasia of the hip. In children with this problem, they will have a partial or complete dislocation or subluxation of the femoral head out of the acetabulum. As you can see here in this figure, the first patient is normal. That femoral head is sitting perfectly in the acetabulum. In the next case, the head is starting to sublux. It’s starting to move out but it hasn’t moved out yet. The next case is a low dislocation. It’s dislocated but the femoral head is still low and close to the acetabulum. 00:42 In the last case which is more severe, this is a high dislocation where the hip has come completely out and is fairly far from the acetabular space. So, this affects 1 in 1000 births in Caucasians and is less common in African-Americans and other races. In an older child, the problem is that they can become fixed bony changes in their hip such that they’re really not able to use that hip well and may be unable to ambulate. This disease is more common in infants with cramped intrauterine environment, so for example, children with a breech presentation. It’s much more common in females than it is in males. There are some long term complications of developmental dysplasia of the hip. They may develop an osteoarthritis of the hip later on in life. This can be a painful condition. 01:37 They may have an abnormal gait. They may have decreased mobility. They may develop flexion contractures that can further render them less able to move. The way developmental dysplasia of the hip is detected in a child is through two maneuvers which are highly likely to appear on a test. 01:57 These are called the Ortolani and Barlow procedures. Let’s go through what they are. 02:04 Basically, the Barlow procedure is when you try to dislocate the femoral head out of the hip by pressing down. The Ortolani is then trying to relocate the hip with a twisting motion. 02:19 You can see in this picture a doctor performing an Ortolani and Barlow procedure. They’ve already tried to dislocate the hip. Now, they are relocating it. They may feel a clunk noise as that hip gets relocated into the acetabular space. This test, while cited highly on exams actually has a reasonably high false positive rate. Oftentimes, hips can sublux in this period of infancy without any long term sequelae and doctors can feel slight mobility to that hip. They may be concerned there’s a problem when in fact, there isn’t. There should be a lot of laxity in a dislocated hip. A perhaps more accurate way to test for a dislocated hip when it’s in the dislocated state is a leg length discrepancy. Since they bend both legs such the child would be in a sitting position if they were on a chair and measure the height of the knees as they lie on their back. This should be the same. If there's a difference, it’s possible that lower leg has been dislocated posteriorly. So, when do we test for problems in dysplasia of the hip? Well, the best time to ultrasound a hip is after six weeks and before four months. The reason we don’t like to check for this problem before six weeks is that there are high rates of false positives. 03:44 Additionally, after four months, the ultrasound is no longer the test of choice. Now, it’s probably better to get an X-ray, both a frog leg and AP view of the bilateral hips. If a patient does have developmental dysplasia of the hip, early detection is useful because we can do a non-surgical approach. 04:08 These patients should be referred to a pediatric orthopedist. The doctor will do the early treatment of placing the child in a Pavlik harness. The Pavlik harness as pictured here is successful about 90% of the time. So, this is an effective way of treating this problem. By placing the child in this harness for a long period of time, they’re able to function. Diaper care can continue. 04:34 That hip will now grow better into that space without any required surgery. 04:39 However, in severe cases or cases where there’s a delay in diagnosis, surgery may be necessary.

The lecture Developmental Dislocation (Dysplasia) of the Hip (DDH) by Brian Alverson, MD is from the course Pediatric Rheumatology and Orthopedics.

During the physical examination of a 2-month-old boy, you notice laxity of his hip. Considering the child's age, what is the best test to confirm hip dysplasia?

Which pregnancy complication can result in developmental dysplasia of the hip?

Which among the following is NOT a long-term complication of developmental dysplasia of the hip?

Which of the following maneuvers consists of the dislocation of the hip by pressing down with the child in the supine position?

A child has dysplasia of the hip, as indicated by the Ortolani and Barlow maneuvers, and confirmed with an ultrasound of the hip. Which of the following is the next best step?

Author of lecture Developmental Dislocation (Dysplasia) of the Hip (DDH)

I learned many things in this short and excellent lecture that I was not taught after 2 years of residency in pediatrics. Now I feel more confident regarding this topic.

Easy to understand
By Manuel Zenin M. on 14. May 2018 for Developmental Dislocation (Dysplasia) of the Hip (DDH)

Very good presentation, i understand the concepts an the time for the diagnosis, thanks!

I learned many things in this short and excellent lecture that I was not taught after 2 years of residency in pediatrics. Now I feel more confident regarding this topic.

Easy to understand
By Manuel Zenin M. on 14. May 2018 for Developmental Dislocation (Dysplasia) of the Hip (DDH)

Very good presentation, i understand the concepts an the time for the diagnosis, thanks!