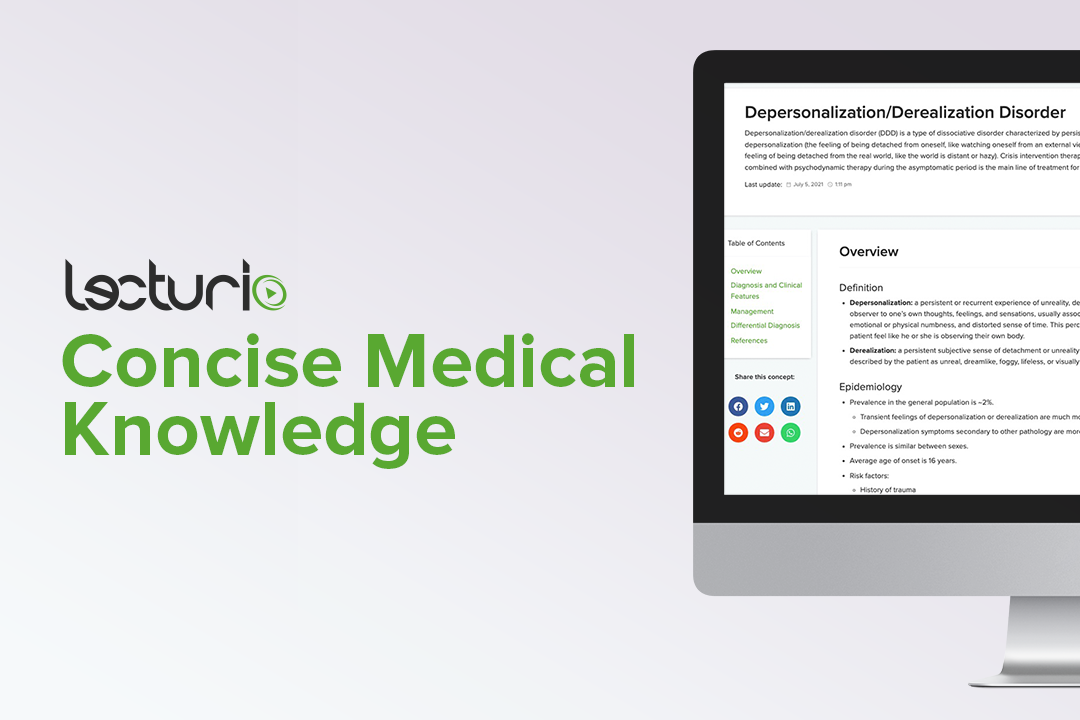 Depersonalization/Derealization Disorder
Depersonalization/derealization disorder (DDD) is a type of dissociative disorder characterized by a persistent experience of depersonalization (the feeling of being detached from oneself, like watching oneself from an external viewpoint) and derealization (the feeling of being detached from the real world, like the world is distant or hazy). Crisis intervention therapy during the acute episodes, combined with psychodynamic therapy during the asymptomatic period, is 1st-line treatment for this disorder.
read more
Load more
Share
Ask Questions
Take Notes
Download Slides
Report Mistake
Comments
show all Show less
My Notes
show all Show less
Learning Material 2
show all Show less
Report mistake
Transcript
0 of 0

00:00 Let's now take a brief moment to review Depersonalization/Derealization disorder. It's the persistent or recurrent feeling of detachment from one's self, environment, or social situation in the presence of intact reality testing. People with this disorder are very aware of it and they often will fear that they're going crazy. It's frequently associated, therefore, with anxiety and panic. Consider this clinical case example. A 28-year-old man is sitting in a coffee shop. He's watching other people and it looks as if they are not real and are actually part of a dream. He thinks this is odd and wonders to himself if he's going crazy. What do you think he's experiencing? Well, the answer is a derealization disorder. 00:55 The gender ration is 1:1. The average age of onset is 16-years-old. 01:02 There's an increased incidence of comorbid anxiety and depression and severe stress is a predisposing factor. 01:10 The lifetime prevalence across the US, Canada and Europe is about 2.8 %. 01:16 So here are few questions about the pathology. What does trauma have to do with it? Well, we actually think that depersonalization/derealization is a quintessential response to acute trauma. How about organic precursors? Do you know of any that could be involved? Seizures, head injury and substance abuse can all lead to the depersonalization/derealization symptoms and need to be ruled out before making a diagnosis of a dissociative disorder. In terms of neurobiology, what's associated with depersonalization? Well, actually we think several neurotransmitter systems are involved: NMDA, opioid and serotonin, also brain regions like the parietal lobe and the right hemisphere. Functional brain circuits are also important and we think there may be hypoactivation of the limbic system that's associated with depersonalization and conceptual models. What about cognitive behavioral models? Well, fear is a central component and the core components can be dissociation of affect, meaning not feeling, along with alexithymia (difficulty identifying and verbalizing emotions) and this can happen during the depersonalized state. According to psychodynamic theories, there can be an inability to integrate various aspects of one's self-experience with the world around them. So how do you diagnose depersonalization/derealization disorder? So you're looking for persistent or recurrent experiences of either depersonalization or derealization and they meet 1 or 2 of the following criteria: Depersonalization which is unreality, detachment, or feeling like being an outside observer or derealization, the unreality or detachment with respect to surroundings. So for example, individuals are objects and experience this unreal, dreamlike, foggy, or visually distorted. Reality testing is actually intact during the episode. The symptoms cause significant distress and impair social and occupational functioning. The disturbance is not due to substances or general medical condition and also the symptoms cannot be better attributed to another psychiatric illness. The differential diagnosis includes schizophrenia, panic disorder, acute stress disorder, PTSD, other dissociative disorders and also personality disorders such as borderline and avoidant personalities and of course in your differential you've ruled out substances in general medical conditions. This is often chronic but it can remit without any intervention at all so in fact a lot of these individuals never end up seeing a physician for their symptoms but when there is comorbid anxiety or depression, that might bring an individual in to meet a doctor and in that case you want to treat it with therapy and also medications specifically anxiolytics, maybe a very brief brief trial of a benzodiazepine or a first line medication for anxiety such as an antidepressant like an SSRI. Now, here's a question to kind of end things up. 04:43 Have you ever arrived at a destination in your vehicle and had absolutely no recollection of what happened while you were driving there? Well, this is an example of a non-pathologic dissociation. In other words, it's a very common human experience. When we talk about depersonalization and derealization, we are interested in the people who find their symptoms so distressing that it's really interfering with their life and that's what sprained them in for an evaluation and for treatment and help.

The lecture Depersonalization and Derealization Disorder by Helen Farrell, MD is from the course Dissociative Disorders.

Which of the following is NOT a feature of depersonalization?

Which of the following regarding depersonalization is FALSE?

Which of the following terms describes the difficulty to identify and verbalize emotions?

Which of the following is NOT a differential diagnosis of depersonalization/derealization disorder?