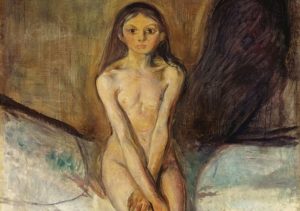 Puberty: Normal, Delayed and Precocious Puberty
Normal puberty is marked by the maturation of the gonads, breast development in females, and adrenarche, resulting in body odor, acne and pubic and axillary hair growth. Precocious puberty is the development of secondary sexual characteristics before the age of 8 in females and 9 in males. Delayed puberty in males is the lack of testicular enlargement by 14 years old, and a lack of breast development at 13 years old in females.
read more
Load more
Share
Ask Questions
Take Notes
Download Slides
Report Mistake
Comments
show all Show less
My Notes
show all Show less
Learning Material 2
show all Show less
Report mistake
Transcript
0 of 0

00:01 So causes of delayed puberty in boys are multiple, but generally if they are central they are more likely to be a cancer. 00:14 In boys, we're gonna suspect this if there is no testicular enlargement after 14 years of age. 00:22 In girls, we're gonna suspect delayed puberty if there's no thelarche by the age of 13. 00:28 So boys are allowed the next 3-year delay. 00:31 They start later, they finish later. 00:34 Keep in mind though that 2.5% of healthy boys and girls do have delayed puberty We're using this cut-off so that we can check kids as early as we can without having to test too many children. 00:47 So what are the types of delayed puberty? Well, we have constitutional delay. 00:53 This is by far the most common. 00:55 These are simply children who are having their puberty later. 00:59 Much like they might have a later growth spurt. 01:02 This is common if there is a family history of delay, if the parents don't have a delay on their pubertal development, or also in children who have excessive exercise or work very hard at the sports. Sometimes this will happen. 01:15 There may be a problem with the gonadotropin. 01:18 The gonadotropins are FSH and LH. 01:21 This would be hypogonadotrophic hypogonadism. 01:25 In other words, their gonads are less productive because of a hypogonadotrophic state. 01:30 This is a problem with the brain or they might have primary gonadal failure which is hypergonadotrophic hypogonadism. 01:38 This is because they have lots of gonadotrophs and very little response. 01:43 So let's drill down on causes of hypogonadism. 01:48 When the gonadotropins are the problem, there are some central issues that we might see. 01:56 One classic example is Kallmann syndrome. 01:59 This is an isolated deficiency in the pituitary and also these patients often have anosmia. 02:07 So, they are not smelling very well because of the problem with the first cranial nerve and they will have isolated deficiency of production of their gonadotropins. 02:16 This can be functional as well, patients with eating disorder, excessive exercise, some of our real-star athletes, will have a delay in their puberty and that's a central process. 02:28 Like we stated in boys, often it is a pituitary lesion so we need to worry about pituitary lesions in these children. 02:37 And certainly, we would worry about it in a child who has a history of pituitary surgery. 02:42 Remember, resection of pituitary adenomas carries with it about a 15% chance of being having problems with pituitary endocrine function afterwards. 02:54 Flip side, if there's primary gonadal failure we have to think about some other potential causes of what's going on. 03:01 There are some genetic causes such as Klinefelter's, which is XXY or Turners syndrome which is just one X. 03:10 And in both those genetic situations, children have a decreased responsiveness of their gonads to the gonadotropin that's trying to get them stimulated. 03:21 Also, patients may have a history of a radiation of the testis, or chemotherapy, or rarely children can have autoimmune ovary disease which will result in a hypogonad state where there is hypergonadotropic levels of hormone, FSH and LH, which are trying to stimulate a diseased ovary. 03:42 So if we have delayed puberty in a healthy child, we're going to check LH, FSH, estradiol in girls, and testosterone in boys. 03:53 If the child has a concern, it's gonna be largely guided by our exam. 03:58 What is the problem? Consider thyroid hormone levels, prolactin levels, and CBC, and sed rate as a way of measuring chronic malingering condition. 04:09 Delayed puberty, if there's constitutional delay we're gonna manage it simply by reassurance. 04:17 Eventually your child is gonna have their period, don't you worry about a thing. 04:21 For boys, we typically treat this with testosterone injections. 04:26 Typically, this happen about once a month. It's not too troublesome. 04:31 Families don't usually have a problem with it but it is expensive and so you probably will have to document testosterone deficiency prior to the insurance company being willing to pay for the therapy. 04:41 For girls with delay, you can consider initiation of estrogen therapy. 04:47 Usually, we simply put them on an estrogen pill like an oral contraceptive pill and that will start to promote the puberty and get them regular. 04:55 So that's all I have today about delayed puberty and how we deal with that problem. 05:00 Thanks for your attention.

The lecture Delayed Puberty in Children by Brian Alverson, MD is from the course Pediatric Endocrinology.

A girl presents with delayed puberty. You notice she has a short stature and a broad neck and wide-spaced chest. What is the most likely diagnosis?

Which of the following is the age limit for the diagnosis of delayed puberty in both boys and girls?

Which of the following set of lab works is required for a patient with delayed puberty who is otherwise healthy?