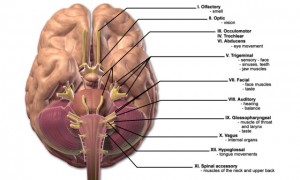 12 Cranial Nerves – Functions and Mnemonics
Nerves emerge as spinal nerves from segments of the spinal cord. Cranial nerves emerge directly and without “detour” via the spinal cord from the bony skull because they supply cranial structures or fulfil specific functions. As the 31 pairs of spinal nerves, they are considered components of the peripheral nervous system (PNS). The cranial nerves I and II are exceptions since they do not emerge from the brain and therefore are not considered peripheral nerves. During medical studies, cranial nerves are an essential element of the subjects of the brain and the nervous system. In the following, you will find a concise overview of the classification, the functions and the course of the 12 cranial nerves.
read more
Load more
Share
Ask Questions
Take Notes
Download Slides
Report Mistake
Comments
show all Show less
My Notes
show all Show less
Learning Material 2
show all Show less
Report mistake
Transcript
0 of 0

00:00 The oculomotor nerve is the next one for you to think about. It has two functional components. 00:08 First is a general somatic efferent component as it innervates skeletal muscles. Then there’s also a general visceral efferent component for you to keep in mind. The third cranial nerve leaves through the superior orbital fissure of the middle cranial fossa for its distribution. 00:34 With respect to general somatic efferent innervation, the oculomotor nerve is responsible for innervating several of the extraocular muscles as well as a muscle that elevates the upper eyelid. That muscle is termed the levator palpebrae superioris. You can see it along here. Then you see its insertion into the upper eyelid right in through here. This nerve also innervates the superior rectus which is shown right in through here inserting into the sclera of the eyeball. 01:15 The inferior oblique is innervated by this muscle as well. We see the oblique course of this muscle along the side of the eyeball in this area. Inferior rectus is also innervated by the oculomotor which is labeled here. 01:35 Then we have the medial rectus muscle that is shown right in through here. General visceral efferents are responsible for two functions. One is these fibers will innervate the sphincter muscle of the pupil causing it to constrict. Then the second functional component here is that it will cause contraction of the ciliary muscles which will allow for accommodation of the lens for near vision. Some clinical considerations for you to think about with respect to the oculomotor nerve would be that a lesion of this nerve can lead to dilation of the pupil since it’s no longer able to constrict it. Because of the numerous extraocular eye muscles that the oculomotor nerve innervates, if there’s partial paralysis or paralysis of these muscles, the eye tends to then move down and out. There’s an associated loss of the pupillary reflex. 02:46 Then because of the levator palpebrae superioris no longer being able to contract, there is a drooping of the upper eyelid and that’s termed ptosis. Causes of these clinical features could be due to a compression from a neighboring aneurysmal artery that puts pressure on the nerve causing it to demyelinate. 03:15 Tumors can impair the function of the oculomotor nerve causing it to lesion. Lack of blood supply to the nucleus or to the oculomotor nerve fibers can cause infarction. A thrombosis in the cavernous sinus can impinge upon the oculomotor nerve and cause impairment. Then meningitis, an inflammatory state, can also involve the oculomotor nerve as well.

The lecture Cranial Nerve III: Oculomotor Nerve by Craig Canby, PhD is from the course 12 Cranial Nerves and Their Functions.

Which of the following muscles is NOT innervated by the oculomotor nerve?

What is general visceral efferent innervation by CN III responsible for?

What condition would oculomotor nerve palsy result in?