Control and Regulation of Calcium and Phosphorus

Hypercalcemia
Hypercalcemia (serum calcium &gt; 10.5 mg/dL) can result from various conditions, the majority of which are due to hyperparathyroidism and malignancy. Other causes include disorders leading to vitamin D elevation, granulomatous diseases, and the use of certain pharmacological agents. Calcium levels are regulated and affected by factors such as dietary intake and pH, and the levels of parathyroid hormone (PTH), vitamin D, and albumin. Symptoms vary depending on calcium levels and the onset of hypercalcemia. Generally, neuropsychiatric (confusion, altered mental status), GI (vomiting, abdominal pain), musculoskeletal (bone pain, weakness), and renal (polyuria, polydipsia) manifestations are seen. Confirmation of hypercalcemia is required. Correction of the value is based on the albumin levels or after determining the ionized calcium levels (the metabolically active form), which is followed by determining PTH levels. Subsequent laboratory tests and imaging studies are ordered based on history and presentation. Correction of hypercalcemia depends on its severity. Calcium levels &gt; 14 mg/dL are treated using IV isotonic saline hydration, calcitonin, and bisphosphonates. Hemodialysis is considered in rare cases. Treatment of the underlying cause is recommended.
read more 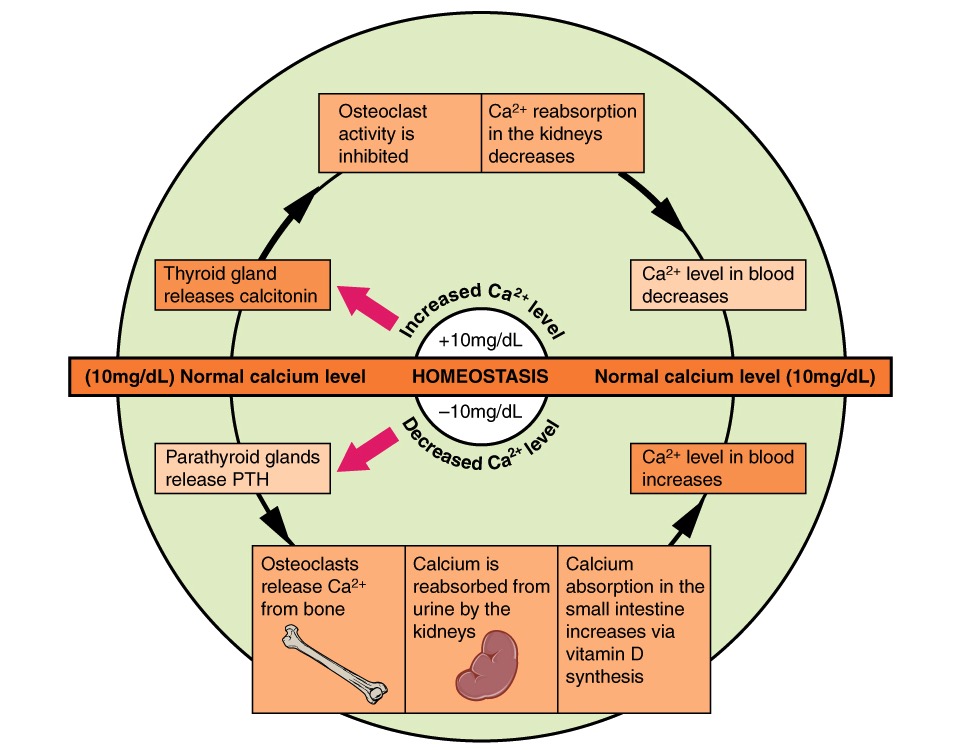 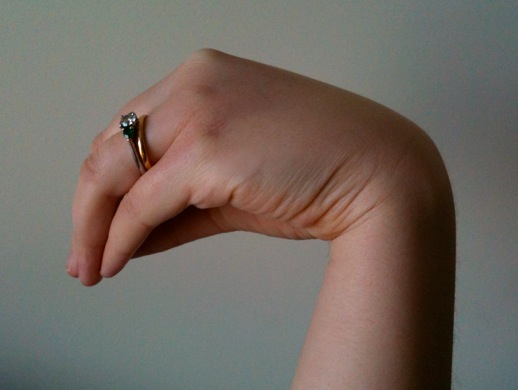 Hypocalcemia
Hypocalcemia, a serum calcium < 8.5 mg/dL, can result from various conditions. The causes may include hypoparathyroidism, drugs, disorders leading to vitamin D deficiency, and more. Calcium levels are regulated and affected by different elements such as dietary intake, parathyroid hormone (PTH), vitamin D, pH, and albumin. Presentation can range from an asymptomatic (mild deficiency) to a life-threatening condition (acute, significant deficiency). Patients can exhibit symptoms from neuromuscular irritability (tetany, Chvostek sign, Trousseau sign) to cardiovascular dysfunction (arrhythmia). Confirmation of hypocalcemia is required with correction of the value depending on albumin level or ionized calcium (the metabolically active form), followed by PTH level, and determination of the underlying cause. Correction of calcium is dictated by the degree of severity of hypocalcemia. In severe cases, IV calcium administration is required. Treatment of the underlying cause is recommended.
read more
Load more
Share
Ask Questions
Take Notes
Download Slides
Report Mistake
Comments
show all Show less
My Notes
show all Show less
Learning Material 2
show all Show less
Report mistake
Transcript
0 of 0

00:00 These hormones that control calcium and phosphorus or phosphate are parathyroid hormone and where does parathyroid come from? The thyroid gland has 4 nodules in it, and these are the parathyroid nodules. These parathyroid hormones are going to do a few functions for us. The 1st thing it does it acts on the kidney to reabsorb calcium, to not reabsorb phosphate, and to activate vitamin D. So vitamin D has a few forms converted to its most active form of vitamin D which is known as D3. D3 is going to have hormonal actions on its own, but let's put that aside just for a second and talk about what parathyroid hormone is doing. Since it is reabsorbing more calcium from the kidney, you're going to be able to be putting more calcium back into the circulation. It is dumping phosphate or not reabsorbing it, so you are losing some phosphate. Parathyroid hormone also acts on the bone to cause calcium to be reabsorbed. So this is working on your stores of calcium in the body, breaking them down, for what purpose? So you're reabsorbing it from your kidney, you're reabsorbing it from the bone. Why are you doing all this work? The big issue is you need to maintain plasma calcium levels somewhere in between about 8.5 to 10.6 mg/dL. How do you do that? You are reabsorbing bone from these 2 locales and moving it into the plasma. This movement of calcium from its stores in the bone and when it's been reabsorbed increase plasma calcium levels. If you increase plasma calcium levels enough, you can decrease parathyroid hormone. 02:07 So, really parathyroid hormone is stealing calcium from the bone by having it undergo reabsorption. You might ask well I really thought we wanted to save our calcium, we want to store it up in the bones like we do our money in the bank. Right? That is true, but you need to always have some cash flow and our cash flow in this case is the plasma levels of calcium. You need to always have a certain amount of calcium in the plasma or you will die. So therefore some of that stealing of calcium from the bone is to make sure you have enough circulating around in the body. Now, I told you that we had active vitamin D3 also produced from the parathyroid. Let's now talk about what it is doing for plasma calcium levels. The 1st thing is it also causes bone resorption to occur. It also stimulates the kidney to reabsorb more calcium, but it does one thing that's different, it also reabsorbs phosphate. So, our phosphate levels can increase if we have active D3 around. That's important because remember eventually we will want to store back up some of that extra calcium, right. We can only do that if it's in relation to phosphate because we need the calcium phosphate crystals. The last thing that the D3 will do will act as a negative feedback to stop the conversion to its most active form. 03:51 There's one last effect that we have left off this particular diagram, and that is you do change the amount of intestinal absorption of calcium. So, if you were to eat a meal and had high D3 levels around, and let's say that meal involved calcium whether it would be eating your spinach or drinking your milk, those will allow for more intestinal absorption of calcium, if D3 in its active form is around, therefore that will also feed into maintaining or increasing the plasma levels of calcium. So we have a lot of mechanisms involved here, either reabsorbing it from the bone, using it in the kidney, or reabsorbing it from the intestine all in an effort to maintain plasma calcium levels at high enough levels that we can undergo normal physiological function. The 2 hormones that are primarily involved here, PTH and active vitamin D. We should also discuss the negative feedback inhibition loop of calcium homeostasis. In the case of elevated calcium levels, calcium will directly inhibit the secretion of parathyroid hormone. Calcitonin is secreted by the parafollicular cells or C-cells of the thyroid. This hormone opposes the effects of PTH. It inhibits the reabsorption of calcium by the bone which will lower the amount of calcium in the blood. It also inhibits renal reabsorption of calcium and phosphate allowing them to be excreted in the urine. As a result, calcitonin lowers serum calcium levels. Additionally if the effects of PTH lead to an increased level of active vitamin D, this will stimulate the osteoclasts within the bone to further inhibit the renal reabsorption of phosphate. These are the negative feedback loops that help regulate our levels of calcium and phosphorus.

The lecture Control and Regulation of Calcium and Phosphorus by Thad Wilson, PhD is from the course Musculoskeletal Physiology.

Which of the following directly inhibits the release of PTH?

Which of the following is a FALSE statement regarding an increase in parathyroid hormone?

Which of the following is the normal plasma calcium level?

Which of the following is NOT a function of Vitamin D3?

Author of lecture Control and Regulation of Calcium and Phosphorus

Well understand his lecture, and He is talking slowly and patiently.

Well understand his lecture, and He is talking slowly and patiently.