Congenital Infections of the Infant 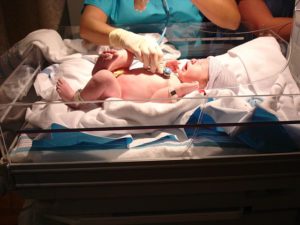 Congenital Infections of the Newborn — Definition and Treatment
Congenital infections are common and are associated with significant morbidities for the infant. Classically, congenital infections of the infant have been given the acronym TORCH which stands for toxoplasmosis, others (syphilis, varicella-zoster virus, parvovirus B19 and human immunodeficiency virus), rubella, cytomegalovirus and herpes simplex.
read more
Load more
Share
Ask Questions
Take Notes
Download Slides
Report Mistake
Comments
show all Show less
My Notes
show all Show less
Learning Material 2
show all Show less
Report mistake
Transcript
0 of 0

00:02 In this lecture, I’m going to discuss congenital infections of the infant. 00:07 So we often call these TORCH infections. 00:11 TORCH, the letters stand for the diseases. 00:14 T is toxoplasmosis. 00:17 O is unfortunately other, which includes syphilis, parvovirus, HIV, varicella. 00:23 R is rubella. 00:25 C is cytomegalovirus or CMV. 00:29 And H is herpes simplex virus or HSV. 00:33 I want to go through these infections one at a time. 00:37 So let’s start with toxoplasmosis. 00:40 Toxoplasmosis is caused by a parasite, Toxoplasma gondii, that’s found in animals. 00:47 In particular, you can find it in cat litter of cats, especially cat litter that’s been out for more than 24 hours. 00:55 And you may find raw or undercooked meat especially beef. 01:01 It’s mom’s first infection that confers risk. 01:04 So it should be her first infection during pregnancy. 01:08 Sometimes, patients will be tested for toxo in that they’ll be checked to see if they have antibodies already formed against toxo and if they do, they’re at lower risk conferring this to a child. 01:20 It’s the women who are not immune to toxo who get it first during pregnancy that can confer a risk to their infant. 01:28 Also, in immunocompromised parents, they may have a reactivation of their latent toxo infection and that can also confer a risk. 01:40 So, it’s the first infection during pregnancy or a reactivation in an immunocompromised mother that confers risk of toxo. 01:49 Toxo can present with a variety of symptoms including hydrocephalus, microcephaly, diffuse cerebral calcifications, chorioretinitis or hepatosplenomegaly. 02:02 This is one of the few congenital infections that causes microcephaly. 02:08 So keep that one in mind and the calcifications we see commonly. 02:13 So if we suspect toxoplasmosis, we generally would diagnose it by getting serology, serologic testing. 02:21 And we would treat it in the infant with medications similar to what we treat in older people with toxo, which is pyrimethamine, sulfadiazine, and leucovorin. 02:34 Sadly, the drug company that was making pyrimethamine was bought out by another drug company. 02:42 And so now, the cost of pyrimethamine went from what is 2 cents in say Brazil to $750 per pill. 02:51 This was purely a profit move. 02:54 So now, the cost of management of toxoplasmosis and treatment, which is a long term cost, is as much a $75,000 a month. 03:06 So toxoplasmosis prevention is what’s key. 03:11 Pregnant women should be tested if there’s a concern for risk of toxoplasmosis. 03:17 And pregnant women should avoid uncooked meat. 03:21 So steak tartare is forbidden during pregnancy. 03:25 Additionally, we recommend that pregnant women should change their cat litter at least daily or have someone else do it. 03:33 It takes a day for the form of the toxoplasmosis to become effective while outside of the cat’s body. 03:40 So rapid or frequent changing of kitty litter should be okay. 03:45 Let’s move on to syphilis. 03:48 Syphilis is caused by the spirochete, Treponema pallidum. 03:53 In the United States, we are having currently a rising epidemic of syphilis. 03:59 The highest transmission to the fetus is if the mother has secondary syphilis. 04:05 Primary syphilis is less likely to transfer, but it still can. 04:08 So if a mother has secondary syphilis, we worry about that baby. 04:14 The baby can present with a variety of symptoms. 04:17 They may be asymptomatic or they may be dead on presentations. 04:22 So stillbirth is possible, but also, more than 60% will be completed asymptomatic at birth. 04:29 But watch out, they may later present with a second or a third staged disease syphilis. 04:37 So a child may be asymptomatic at birth, and then at few years of age, develops secondary syphilis. 04:44 So early findings in syphilis include hepatosplenomegaly, lymphadenopathy, rash, a rhinitis or syphilitic snuffles, or they may have metaphyseal lucencies on radiography. 04:59 That can be a classic x-ray finding. 05:02 Later findings include Hutchinson teeth, which are notched teeth. 05:09 Hearing loss, a saddle nose deformity, or Saber shins, which are sharpened shins in the front from hematopoiesis. 05:19 Or they may also get developmental delay.

The lecture Congenital Infections of the Infant by Brian Alverson, MD is from the course Neonatology (Newborn Medicine). It contains the following chapters:

Which of the following is NOT a TORCH infection?

Author of lecture Congenital Infections of the Infant

Excellent presentation!.. He make a difficult subject for understand in a clear and didactique explanation of the congenital infections of the infant. Dr. Alverson is very clear for teaching. Congratulations!

Excellent presentation!.. He make a difficult subject for understand in a clear and didactique explanation of the congenital infections of the infant. Dr. Alverson is very clear for teaching. Congratulations!