Conducting System of the Heart 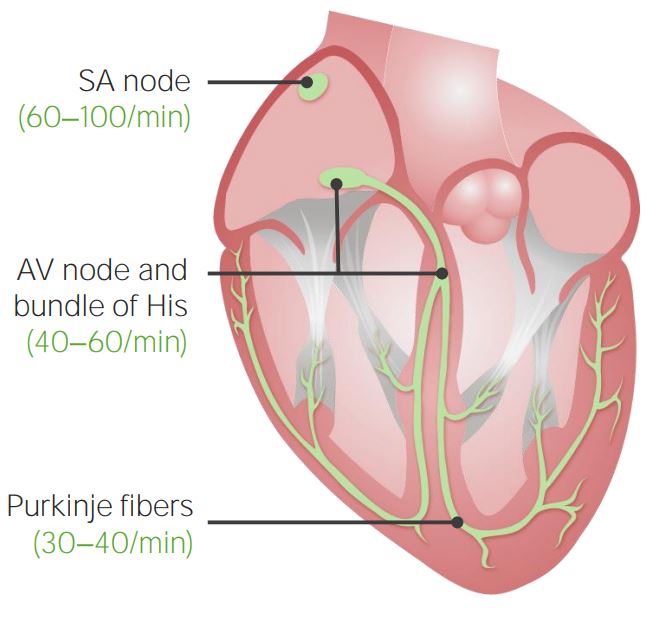 00:01 The next topic we're going to cover here is irregular heartbeats, arrhythmia, and that can be something that is just merely annoying, can cause some morbidity or can be a cause of death. 00:16 So it's a broad spectrum, and there are lots of kind of interesting little details along the way. 00:20 But we're going to cover the big picture and get into those details as well. 00:25 Important to understand the way that the heart is wired and how we get a conduction wave that pretty much allows first an atrial contraction and then a ventricular contraction. 00:37 And the ventricular contraction actually has to start down at the apex, so we squeeze blood up. 00:45 Those are kind of the general organizing principles. 00:49 To get a contractile wave though, we need to fire from cell to cell to cell. 00:55 And so ultimately, the contractile wave and the rhythm of that contractile wave has to happen intrinsically through what's going on in individual cardiac myocytes. 01:08 And there are occasionally some defects or deficits that can occur in those that can lead to arrhythmias. 01:14 So we're highlighting the contractile cells of the myocardium. 01:18 These represent 99% of the myocardial volume. 01:23 As we've discussed previously, it turns out that they are only about 20 or 25% of the total number of cells. 01:29 There are endothelial cells in the heart, there are fibroblasts in the heart, there are the occasional inflammatory cells. 01:36 But 99% or so of the myocardial volume are the contractile cells, and they're going to be important end stage player in making sure we get a nice contractile wave. 01:46 On the other hand, we have the conduction fibers and the conduction fibers are in fact, modified cardiac myocytes. 01:55 They are not nerve fibers, they are not nerve bundles. 01:59 They are in fact modified cardiac myocytes, and they have many of the same structural features. 02:04 They actually have sarcomeres, etcetera. 02:06 They have a higher glycogen content, they have some subtle changes, but they are mainly to conduct signals very rapidly from one point to another without using nerves. 02:18 About 1% of the myocardial volume overall represents these conduction fibers. 02:25 They are going to be important in initiating the electrical impulse at the sinoatrial node for the most part, but if the Sino atrial node doesn't do its thing, the atrioventricular node has to take over. 02:38 They're also going to be important for the propagation of an electrical impulse. 02:42 So it'll start in the sinoatrial node, go to the atrioventricular node, quickly get down to the apex all through these conduction fibers. 02:52 At that point, they hand off the signal to the individual cardiac monocytes, who will propagate it back up the rest of the heart. 02:59 All right, let's look at the individual components of this system. 03:03 So first of all, is the sinoatrial node. 03:06 Sinoatrial node is then going to connect through kind of ill-defined internodal tracts that will bring the signal down to the atrioventricular node. 03:16 To entrain the left side of the heart as well, we have a Bachmann's bundle that goes out of sinoatrial node and crosses over into the left atrium. 03:26 Okay, now we've got the right and left atrium beating together, so the atrioventricular node will hold the signal for just a brief moment that allows the atrium to contract, ejecting an additional 10 to 15% of volume into the left ventricle before the left ventricle then contracts to pump blood out. 03:47 From the AV node, holding it for just a little bit, that signal then goes out the bundle of His and into the right and left bundle branches and eventually out to ramify with the individual cardiac myocytes. 03:57 The sinoatrialnode is the natural pacemaker of the heart. 04:02 We're just showing you here in yellow the conduction system and green highlights where the sinoatrial node lives. 04:08 It has the highest level of automaticity, meaning that it depolarizes faster, reaching threshold better than any other tissue or cell type within the heart. 04:20 So it's going to be in control. 04:23 The sinoatrial node is also receiving a lot of input that affect its natural depolarization tendency. 04:30 It's going to have neural input and it's going to have hormonal input so we can slow the heart rate down with the vagus nerve. 04:39 We can speed it up with catecholamines like adrenaline. 04:42 So the sinoatrial node is going to be very sensitive to both of those, and we will if we look at the sinoatrial node, also see nerves in close proximity. 04:51 It's also got a nice blood vessel supply so that if we want to bathe it with certain hormones, we can. 04:59 The sinoatrial node then tracks down through these internodal pathways into the atrioventricular node. 05:07 And as I've already mentioned, there's a conduction delay. 05:10 This enables an atrial contraction to occur before the ventricular excitation occurs, and this again gives us an additional 10 to 15% atrial kick. 05:21 The bundle of His is the only normal connection between the atria and the ventricles. 05:26 It comes off of the atrioventricular node and then goes, courses down into the right and left bundle branches. 05:34 It's conducting impulses through those bundle branches and eventually, spreading out to the ventricular myocardial cells. 05:42 The connection at that point is at the Purkinje fibers. 05:46 Again, modified cardiac myocytes. 05:48 These are actually recognizable cell types, but they are kind of at the interface between the right and left bundle branches and then the individual cardiac myocytes. 05:57 We are then going to spread that impulse cell to cell to cell to cell, giving us that ventricular contraction in a nice wave. 06:07 Aberrant rhythms, arrhythmias can be initiated any part of the conduction system. 06:12 It can be at the sinoatriall node, atrioventricula node, internodal conductions, Bundle of His, right and left bundle branch. 06:19 It can also be at the Purkinje fibers wherever, and actually also in individual cardiac myocytes. 06:26 We'll talk about each of those because they have slightly different manifestations.

The lecture Conducting System of the Heart by Richard Mitchell, MD is from the course Arrhythmia.

Which structure of the conduction system has the highest level of automaticity in the heart?

Which of the following increases heart rate by stimulating the sinoatrial node?

Which structure of the conduction system is responsible for the physiologic conduction delay in the heart?

What is the normal direction of the Bachmann bundle?

What is the normal direction of the conduction pathway in the heart?

Author of lecture Conducting System of the Heart