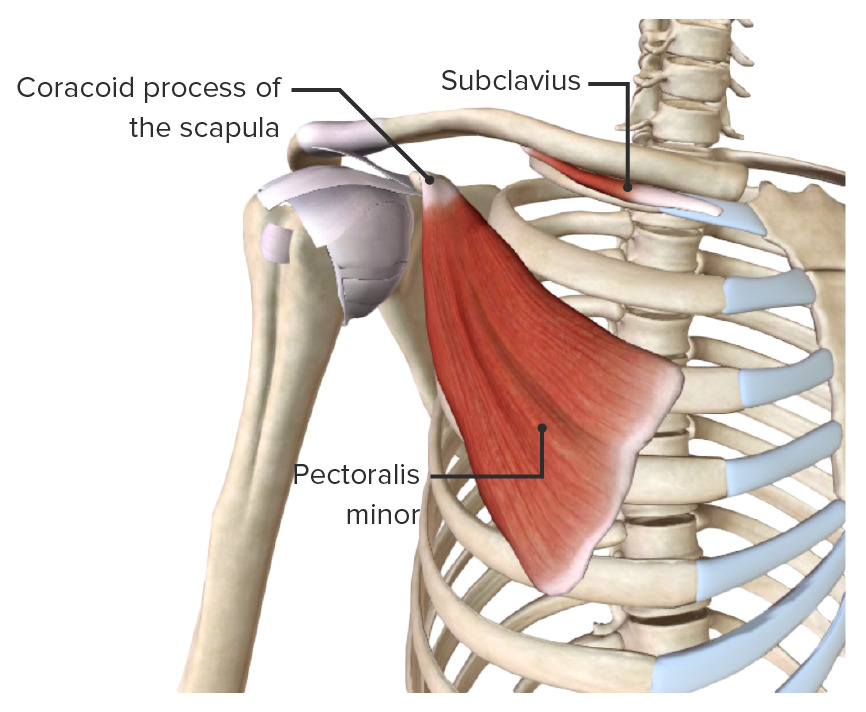 00:01 So let's have a look at these bones in a little bit more detail. Let’s start off by looking at the clavicle. And on the screen we can see both the superior and then inferior view of the clavicle. We can see here we have got a sternal end and this is well articulates with the sternum. And then we can see we have got the acromial end over here, here as well and these form articulation with the acromion of the scapula. So let’s look at this in a bit more detail. As I have said the clavicle connects the sternum to the scapula. It is important as it keeps the upper limb away from the trunk. So it moves the upper limb away from the trunk, again allowing an increased movement. So there is less chance for the upper limb to hit the chest wall. It has been moved away from the trunk, increasing the movement. We can see here we have got the superior view of a right clavicle as if we are looking down onto it. We can see again this sternal end, we can see this acromial end. This medial half has a curve and this lateral half has a curve as well and it is important in being able to recognize a left from a right clavicle and also a superior and inferior surfaces of the clavicle. So superiorly a clavicle is smooth. 01:33 So here we can see on this superior view, the smooth shaft of the clavicle. There is no angulations, there is no grooves which we'll later see on the inferior view. 01:45 So if you are seeing a smooth surface, you are looking at the superior surface of the clavicle. 01:51 If you then see one of these curves and along its anterior surface which is here, it has got this curve. This curve is convex. So anteriorly this curve is convex, whereas more laterally over here, we can see anteriorly the curve is concave and this is how we can orientate our clavicles. We find the smooth superior view and then anteriorly we have a convex curve and anteriorly here we have a concave curve. And now see this is going to be the opposite along this posterior surface. If we then move towards the inferior surface, this is if we're standing underneath the clavicle and we are looking up. We can see that its roughened. There is a whole series of tubercles or features, which are important for articulation with ligaments. And here we can name a few of them. We have what's known as the conoid tubercle. 02:53 We have got this tubercle here. This is by the acromial end and we have got a conoid tubercle. 03:00 This is part of the coracoclavicular ligaments which we will talk about in more detail later on, an important stabilizing ligament of the shoulder. 03:10 And we also have connecting really the conoid tubercle to this acromial end, the trapezoid line. We can see the trapezoid line, this line the roughened area here. And that is also important because that's where the trapezoid ligament attaches and this again is part of the coracoclavicular ligament. And this is important again and helping to stabilize the shoulder joint. We can see we have an impression for the costoclavicular ligament, we can see that here. This is by the sternal end of the clavicle and as its name suggests, the costoclavicular ligament is going to attach to the ribs and this is important in the sternoclavicular joint, which we'll look at again later on in this series. 04:02 We also have a subclavian groove and we can see a subclavian groove here and this is important for attachment of subclavius muscle, a small muscle that runs on the underside of the clavicle and we'll cover that when we look at the musculature. Another feature on this inferior view of the clavicle is this nutrient foramen and that is where the nutrient artery passes into the clavicle to give it its blood supply. So here we have an overview on this slide of the clavicle. This is a right clavicle in this diagram. We have the smooth superior surface which is convex anteriorly for the medial half and concave anteriorly for the lateral half. The inferior view has a number of features. It’s roughened. It got the conoid tubercle, the trapezoid line, the costoclavicular ligament impression and also a groove for subclavius. If we now move on to the scapula. The scapula

The lecture Clavicle – Bones and Surface Anatomy of Upper Limb by James Pickering, PhD is from the course Upper Limb Anatomy.

The conoid tubercle is part of which ligament?

Which statement about the clavicle is correct?

Clavicle
By Daniela P. on 25. March 2019 for Clavicle – Bones and Surface Anatomy of Upper Limb

Great
By Victoria W. on 27. November 2018 for Clavicle – Bones and Surface Anatomy of Upper Limb

Excellent lecture about the clavicle -- key landmarks are highlighted and the compare/contrast of superior and inferior views is extremely helpful.

Clavicle
By Daniela P. on 25. March 2019 for Clavicle – Bones and Surface Anatomy of Upper Limb

Great
By Victoria W. on 27. November 2018 for Clavicle – Bones and Surface Anatomy of Upper Limb

Excellent lecture about the clavicle -- key landmarks are highlighted and the compare/contrast of superior and inferior views is extremely helpful.