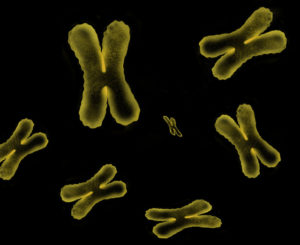 Sex-Linked Genetic Disorders and Chromosome Theory Exceptions, Epigenetic Factors
The Boveri–Sutton chromosome theory states that the chromosomes are the basis of all genetic inheritance. Morgan's work with fruit flies provides a solid evidence associating a specific gene with a specific chromosome. The SRY gene is important in the sex determination of humans. It encodes a SRY protein which is responsible for male sex determination initiation. Certain human genetic disorders are sex-linked, such as color blindness and hemophilia. There are two exceptions to the chromosome theory of inheritance.
read more
Load more
Share
Ask Questions
Take Notes
Download Slides
Report Mistake
Comments
show all Show less
My Notes
show all Show less
Learning Material 2
show all Show less
Report mistake
Transcript
0 of 0

00:00 Not all traits are going to be located on chromosomes that are in the nucleus. This is where we are going to look at exceptions to the chromosomal theory of inheritance because these things are not going to exhibit Mendelian style inheritance patterns. The example here, first of all, is looking at mitochondria. We know that mitochondria contain their own DNA and when we have a sperm fertilized in egg clearly, the sperm doesn't have room for much cytoplasm and so the egg is the contributor of all the cytoplasm and thus all of the mitochondria and thus all of the mitochondrial DNA. We have identified that there are a number of genes on the mitochondrial chromosomes that end up being expressed and we can trace this maternal inheritance through multiple generations to identify relationships between individuals. 00:59 Mitochondrial DNA has to follow female lineage. And the other place that we will see exceptions to chromosomal theory is in the blossoming field of epigenetics. Epigenetic factors are any factors that influence gene expression that are epi, above the genome. We have the DNA sequence. We have all the genes on our nuclear DNA, but as you learn later on, there are many regions of our genome that are not expressed as genes. They don't code for proteins. 01:40 However, we now know that these regions we used to call junk DNA have a lot of impact on the expression of genes and in the environment has a large impact on these epigenetic factors.First of all, we will look at a couple of different mechanisms in which DNA packing is impacting whether genes can be expressed and as well as that DNA methylation, which affects somewhat how the genes pack, but also we can see that there are dietary impacts. The kind of stuff we are consuming can actually impact how genes are expressed, which is kind of revolutionary. 02:24 This is new stuff and then we can also see that the environment impacts if we were in expose to lots of teratogens or very high levels of stress, the environment can certainly cause changes to the epigenome and affect gene expression and later on in this series, you will learn a little about transposable elements. Jumping genes, they can go from one place to other in the genome and impact gene expressions. These are all epigenetic factors. Also multiple parts of the genome are involved in regulating gene expression. 03:02 One example, we will see here is small RNA sequences that interact with DNA as it packs.

Epigenetics is related to the…?