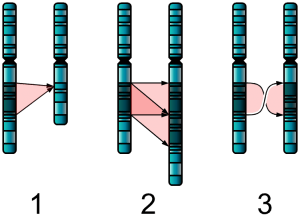 00:01 let us look at not the local mutations, but larger scale mutations when we consider whole chromosomal mutations. For example, a whole section of a chromosome could get deleted. 00:15 Often these sorts of things happen because of crossing over event synapses that didn't go quite right, but we can change genes around. Also, you may see that transposable elements have an impact on some of these larger scale chromosome mutations. We could have things deleted, which end up with a shorter chromosome. We could have duplications where one region that is next to gets duplicated and placed right next to the region that it was originally from and we see an expanding chromosome. We could also see on the chromosomal level an inversion, where one piece gets switched backward. Again transposable elements could come into play. They clip it out and switch it around or put it back in the wrong place. It is sort of a mystery as to where all of these different things happen, but by looking at all the chromosomes and the arrangement of genes on them, researchers have identified that these things do happen in the process of mutations. We also could see reciprocal translocations. 01:22 Reciprocal means it happens both ways so that each chromosome perhaps we have unequal crossing over and they exchange pieces, but they are not the right length pieces. It was uneven and they ended up one with more information and one with slightly less or they could be equal length reciprocal translocations of material. All of these types of mutations are at the chromosomal level. We don't really have repair mechanisms for them as such, but again the rearrangement of genes could end up putting certain genes downstream of another promoter where a region of DNA could now be transcribed that previously was not transcribed in that type of cell. Those are the sorts of impacts that these chromosomal mutations might have. A quick tour then of mutations and how we repair our own DNA. By now, you should be able to describe some of the means of DNA repair that occur naturally in ourselves as well as distinguish between point and chromosomal mutations and discuss the implications of each of the different mutation types. 02:36 Thank you so much for listening. I will look forward to seeing you shortly.

The lecture Chromosomal Mutations by Georgina Cornwall, PhD is from the course DNA Repair & Genetic Mutations.

Which of the following is NOT a type of chromosomal mutation?