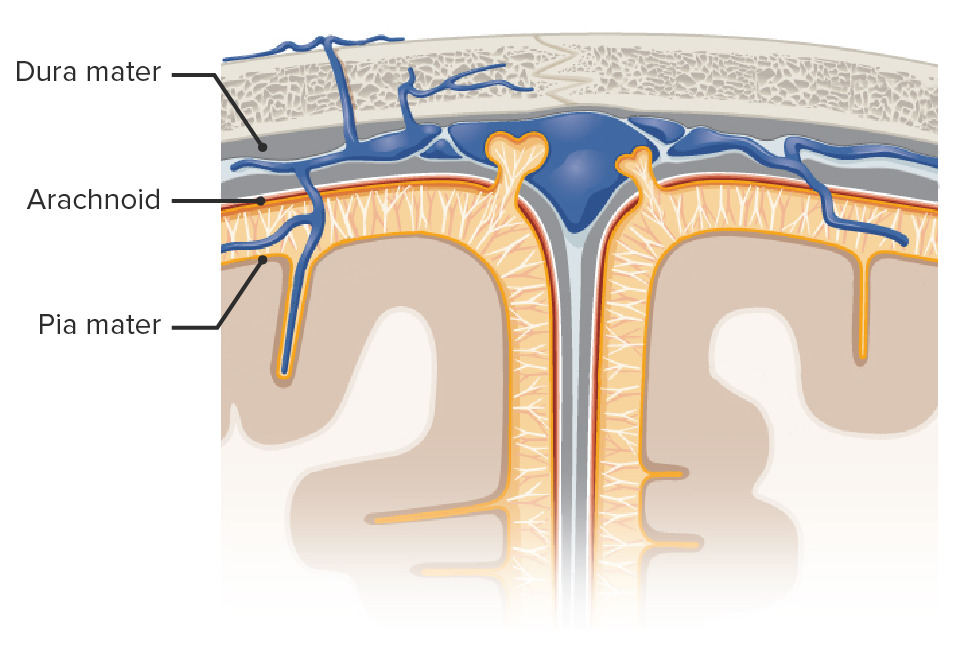 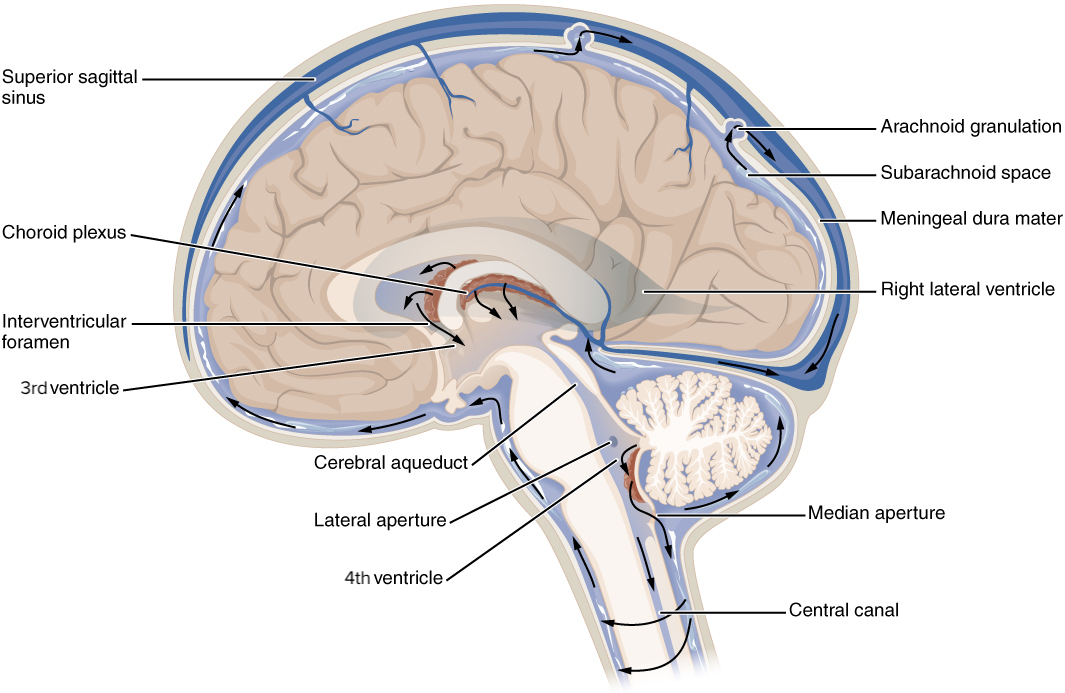 Ventricular System
The ventricular system is an extension of the subarachnoid space into the brain consisting of a series of interconnecting spaces and channels. Four chambers are filled with cerebrospinal fluid (CSF): the paired lateral ventricles, the unpaired 3rd ventricle, and the unpaired 4th ventricle. Connections between the structures occur via the interventricular foramen of Monro and the cerebral aqueduct (sylvian aqueduct). The foramen of Magendie and the foramen of Luschka, are additional channels present in the 4th ventricle.
read more
Load more
Share
Ask Questions
Take Notes
Download Slides
Report Mistake
Comments
show all Show less
My Notes
show all Show less
Learning Material 2
show all Show less
Report mistake
Transcript
0 of 0

00:00 The cerebrospinal fluid is produced by specialized structures. These structures are referred to as the choroid plexuses. 00:11 So it’s important for you to understand their unique features as well as their particular function. So the features and function of the choroid plexus would be they’re located in all of the brain ventricles. So we see a choroid plexus in the lateral ventricle here. It would be found in the contralateral, lateral ventricle. It would also be found in the third ventricle. In this area here, we have the diencephalon and then in the fourth ventricle as well. 00:49 These specialized structures have a villous appearance to them. These villi or projections contain blood vessels. 00:59 There is a special choroid epithelium associated with the choroid plexus. So here, we can see an illustration of the choroid plexus. So this is a villus, an expansion or an extension of epithelial cells. You can see in the core of this villus, you have a blood vessel, lumen of the blood vessel, endothelial cells then they have special choroid epithelium and these are ependymal cells. You can see the apical specializations of those ependymal cells which constitute the choroid epithelium. This arrangement allows for the development of a barrier between the blood and the cerebrospinal fluid. Functionally, this is the structure that’s responsible for the production of cerebrospinal fluid. So there would be movement of fluid from the blood through the endothelium, through the ependymal cells into the ventricular cavity. The volume and pressure of cerebrospinal fluid is that in the ventricular system of the brain and as well as the subarachnoid space and central canal of the spinal cord, there’s approximately 150 milliliters of cerebrospinal fluid. There is variability from one person to another but this is a nice round, average type of volume. It’s constantly being produced at a rate of about 500 milliliters per day. It’s being absorbed at the same rate as the cerebrospinal fluid circulates through the ventricular system. The pressure that’s exerted by the cerebrospinal fluid is approximately 10 mmHg. What are the functions of the cerebrospinal fluid? They are very important even though it may not seem as much since this is fluid. But one of the major functions of the cerebrospinal fluid is to allow for the buoyancy of the brain. This allows the brain to remain suspended. As it’s suspended within the cranial cavity, the brainstem is suspended above the foramen magnum. If the cerebrospinal fluid was low in volume or depleted, the brainstem would fall down within the foramen magnum, be compressed and that would be fatal. 03:47 It also allows for degree of protection. If there’s a blow to the head, if the blow is strong enough, let’s say you get a blow to the right head, if it’s forceful enough, it could cause an injury to the right side of the brain but that blow will push the brain to the left side in response to the blow. The left side of the brain can strike the left side of the skull. 04:16 If that’s the case, you get a contrecoup injury. You’ll get an injury on the opposite side from where you sustained the blow or the force. Here’s a function that you probably don’t think much about. That is the cerebrospinal fluid regulates the chemical concentration of neurotransmitters in the brain, for example. As they’re being released, they can move from the nervous tissue itself into the cerebrospinal fluid. Through the circulation of this fluid, these neurotransmitters and other chemical modulators are removed via sink action. They’re eventually reabsorbed by the arachnoid granulations and returned to the bloodstream. So through this process, the chemical concentration is kept low. A similar process also occurs with metabolic waste removal. So as this active neural tissue produces metabolic waste, this sink action can do the same removal process. The movement of the cerebrospinal fluid or its circulation, we’re going to start with the ventricles. Again, cerebrospinal fluid is constantly being produced in all of the ventricles, lateral, third, and the fourth ventricles. As it’s being produced, it moves from one structure to another structure, gets into the subarachnoid space and then we have to remove it. So as it gets produced by the ventricles, some of that fluid will circulate into the central canal of the spinal cord. The bulk of the fluid will circulate from the fourth ventricle into the subarachnoid space. Then the cerebrospinal fluid, once it gets into the subarachnoid space will be reabsorbed or removed by the arachnoid granulations that exist. Then the cerebrospinal fluid is returned from where it came. That is to the circulation, specifically into the venous circulation.

The lecture Choroid Plexus and Cerebrospinal Fluid (CSF) by Craig Canby, PhD is from the course Ventricular System.

Which of the following is NOT a feature of the choroid plexus?

Which of the following describes the direction of CSF flow?

Which of the following does adequate CSF production help prevent?

Which of the following statements regarding CSF is most accurate?

Good and clear lecture! If you need to get an overview of the CSF, works well

Good brush up on CSF
By Maru Luis L. on 06. December 2017 for Choroid Plexus and Cerebrospinal Fluid (CSF)

Students who have a very good grasp on the topic may not appreciate it, but overall a good brush up on the choroid plexus and CSF.

didn't like it
By Lior H. on 11. August 2017 for Choroid Plexus and Cerebrospinal Fluid (CSF)

I think the lectures are very basic, the information is not sufficient for an exam questions

Good and clear lecture! If you need to get an overview of the CSF, works well

Good brush up on CSF
By Maru Luis L. on 06. December 2017 for Choroid Plexus and Cerebrospinal Fluid (CSF)

Students who have a very good grasp on the topic may not appreciate it, but overall a good brush up on the choroid plexus and CSF.

didn't like it
By Lior H. on 11. August 2017 for Choroid Plexus and Cerebrospinal Fluid (CSF)

I think the lectures are very basic, the information is not sufficient for an exam questions