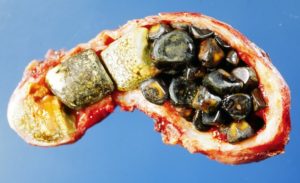 Gallstones — Causes, Risks and Treatment
Gallstones are common in the United States, especially among the Hispanic population. They are common among the fatty fertile females in their forties. The gallstones are mostly asymptomatic that do not need treatment except in certain high-risk groups. The symptomatic patients present with right upper quadrant abdominal pain and cholecystectomy is the primary treatment option in these patients.
read more
Load more
Share
Ask Questions
Take Notes
Download Slides
Report Mistake
Comments
show all Show less
My Notes
show all Show less
Learning Material 2
show all Show less
Report mistake
Transcript
0 of 0

00:01 Welcome back. Thanks for joining me on this discussion of gallbladder. Well, we will discuss cholelithiasis, cholecystitis, and cholangitis. Symptomatic cholelithiasis involves the formation of lots of gallstones. In this picture, you see the entire gallbladder replaced with large gallstones. 00:23 In symptomatic cholelithiasis, these gallstones only cause periodic obstruction. This periodic obstruction can cause distension of the gallbladder. We need to differentiate this from cholecystitis pathophysiology where once again, gallstones are present. 00:43 However, this time the cystic duct obstruction is not intermittent. I would like to pose a question to you. Given that the vast majority of patients with gallstones are asymptomatic, what changes do cause them to become symptomatic? I’ll give you a second to think about this. The answer is cystic duct obstruction. That’s right. Whether it’s symptomatic cholelithiasis in that there’s intermittent obstruction or acute cholecystitis, where there is a chronic obstruction, these are in common when patients develop symptoms. What are the symptoms of cholelithiasis, symptomatic as well as cholecystitis? Well, abdominal pain particularly postprandial described classically after a fatty meal. This pain can be described as colicky or crampy in the right upper quadrant. If it’s not acute cholecystitis, it’s usually self-limited. Patients can describe significant nausea and vomiting. This likely is due to the close approximation of the gallbladder with the proximal GI system namely the duodenum and stomach. Patients can also describe lack of appetite or food fear because every time they eat, they get this significant postprandial pain. 02:04 Common physical findings include a Murphy sign. A technical definition of Murphy sign is an arrest of inspiration while deeply palpating the right upper quadrant. This is suggestive of peritoneal irritation with the descent of the gallbladder. As the patient inspires, the diaphragm drops down on the right side. Dropping of the diaphragm stretches the peritoneum and causes the pain when there’s an infection of the gallbladder. What are some things that you’ll find on laboratory evaluation? Generally speaking, the chemistries are going to be normal. 02:42 When one looks at the CBC, there may be an elevation of the white count also known as leukocytosis, that happens in cases of cholecystitis. 02:52 Furthermore, when liver function tests are looked at, total bilirubin is generally normal unless there is a common bile duct obstruction. Similarly, alkaline phosphatase is going to be normal. 03:05 AST and ALT may be normal except in severe cases of cholecystitis where the liver may be irritated locally.

The lecture Gallbladder: Cholelithiasis & Cholecystitis by Kevin Pei, MD is from the course General Surgery.

Which of the following is TRUE about gall bladder disease?

A 35-year-old female is 4 weeks postpartum and presents with a 3-day history of progressively worsening right upper quadrant pain that radiates to her shoulder. It is worse after eating particularly fatty food and she occasionally has nausea and vomiting after meals. She denies any fevers or malaise. She notes that she had gallstones incidentally found on an ultrasound in the past, but they have never bothered her before. What has likely changed to make her asymptomatic gallstones now symptomatic?

Which of the following lab values suggest common bile duct obstruction in cholecystitis?

Really nice teaching style and great slides. Thank you so much

Really nice teaching style and great slides. Thank you so much