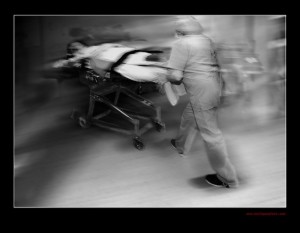 Types of Shock — Definitions
One mainly realizes the importance of functioning blood circulation if it suddenly stops working. If the circulation system decompensates and tissue cannot sufficiently be supplied, the state of the patient can severely worsen within very little time – and you have to act quickly. Shock is life threatening. Thus, it is absolutely necessary that you know all about it as a prospective physician. Here you learn the 3 main causes of shock, and how to treat each of them.
read more
Load more
Share
Ask Questions
Take Notes
Download Slides
Report Mistake
Comments
show all Show less
My Notes
show all Show less
Learning Material 2
show all Show less
Report mistake
Transcript
0 of 0

The lecture Cardiogenic and Obstructive Shock by Carlo Raj, MD is from the course Pulmonary Critical Care.

What is the cranial nerve responsible for transmitting the stimulus which increases sympathetic outflow in response to decreased baroreceptor firing?

Which of the following physiologic changes would you expect to see in a patient with hypovolemic shock?

Which of the following scenarios would result in hypovolemic shock in the setting of increased total body water?

Which of the following IV fluids is typically used in the management of hypovolemic shock?

Which of the following measurements is indicative of failure of the left ventricular output and is used as a rough measurement of preload?

Which of the following would favor the diagnosis of distributive shock over hypovolemic shock?

Which of the following signs would you expect in a patient with cardiogenic shock?

A patient with suspected shock has decreased preload, decreased cardiac output, increased total and peripheral vascular resistance. What is the most likely etiology?

Which of the following medications is most suitable in the management of a patient with cardiogenic shock induced pulmonary edema?

Thank you very much for this very clear shock lecture !

Thank you very much for this very clear shock lecture !