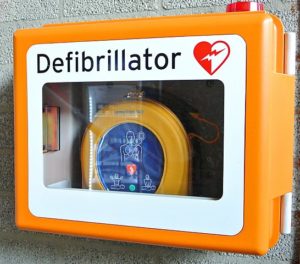 00:01 Hello. 00:02 Now, I'm gonna talk about one of my favorite topics which is basic life support for cardiac arrest. 00:09 So let's start off with a case scenario. 00:11 We've a 58-year-old man, he's running along in a sporting event and he's suddenly drops, becoming pulseless and apneic. 00:19 What do you wanna do to save his life? We're gonna talk about the most important interventions that you can perform right there on the scene that are most likely to improve his outcome. 00:28 We're gonna talk about why this happened physiologically, what might be going on with him, and we're gonna talk about the supporting evidence that helps us know what the most effective interventions are. 00:40 So what is cardiac arrest? The term cardiac arrest refers to the abrupt cessation of effective circulation. 00:48 Basically, it means, the heart has stopped. 00:50 It encompasses a lot of different underlying diseases and conditions but the final common pathway in each case is that the heart is not producing the effective circulation of blood to the body. 01:02 So the primary cause of cardiac arrest, first and foremost is coronary ischemia. 01:07 The whole world over that is the number one cause. 01:10 But there are other things that can lead to cardiac arrest as well. 01:13 Including cardiomyopathies, structural heart lesions such as valvular disease, electrical conduction abnormalities such as brugada syndrome or other channelopathies. 01:26 Metabolic disturbances, particularly those in electrolytes. 01:30 Toxic ingestions, there are number of poisonings that can produce cardiac arrest. 01:35 And there are other non-cardiac conditions that can lead the heart to stop. 01:40 When we look at epidemiology of cardiac arrest, in the United States, we have about half a million arrests per year. 01:45 Of those, about 60% occur outside of the hospital and for out of hospital arrest, there's only about a 10% survival rate, although that number does go up to 30% for cases which are witnessed by bystanders and the victim receives rapid CPR. 02:03 About 200.000 of these events are about a little more than a third occur inside of the hospital and in the hospital, we have a 20% survival rate which is double what we get outside of the hospital but it’s still really not great. 02:16 Obviously, that survival is gonna be affected by the etiology of the arrest, the hospital itself, how prepared it is to deal with high acuity events, and believe it or not, the time of day. 02:28 As far as epidemiology goes, the incidence of cardiac arrest increases linearly with age. 02:34 So as you get older, you have a higher and higher risks of having an arrest. 02:37 And 57% or almost two-thirds of the patients are men. 02:43 When you look at the cardiac rhythm in patients with cardiac arrest, about a quarter have either ventricular fibrillation or ventricular tachycardia which are known as the shockable rhythms. 02:56 Among those patients, you have about a 30% survival rate. 03:01 The remaining rhythms which are pulseless electrical activity and asystole only produce about a 10% survival rate. 03:08 So there's a big difference in how likely you are to survive based on what type of rhythm your heart goes into at the time of arrest. 03:16 Overall, shockable rhythms represent a minority of arrest only about 25% but three quarters of patients who survived have shockable rhythms. 03:27 So you're much, much more likely to survive a cardiac arrest if you have a ventricular fibrillation or ventricular tachycardia rather than one of the other two arrest rhythms. 03:37 When you see somebody in cardiac arrest, they're invariably 100% at a time unresponsive, pulseless, and most commonly apneic, although a few will have preserved agonal respirations or gasping. 03:53 When you're evaluating an unresponsive patient, you wanna always get help right away. 03:58 Not every patient who is unresponsive is in cardiac arrest, but you should assume the worst-case scenario, assume that your patient is in cardiac arrest and that you need immediate back up. 04:09 And even if your patient doesn't turn out to be in cardiac arrest, it’s never a bad idea to get help because the things that make you unresponsive are never good. 04:17 Once you have help on the way, the next question you wanna ask yourself is does this patient have a pulse? This is why in cardiac arrest, we don't use the old ABC mnemonic that we talked about in prior lectures to assess the patient. 04:34 We use CAB. 04:36 Circulation first, because the first and most important question is whether or not your patient has a pulse. 04:43 We wanna check the pulse for a maximum of 10 seconds always in the carotid and if at the end of that time there either is no pulse or we have any question as to whether or not there is a pulse, we're gonna go ahead and initiate CPR. 04:58 Only after we've decided whether or not a pulse is present are we gonna worry about airway and breathing. 05:04 So while you're checking the pulse, you can look for clinical evidence of respiration. 05:09 Again, sometimes you'll see agonal breathing or gasping and rescuers often mistake this for normal breathing, but you should never see normal, rhythmic breathing in a cardiac arrest. 05:19 If you do, you should rethink whether or not your patient is really in cardiac arrest. 05:25 So like I said, your most important question is whether your patient has a pulse. 05:29 We're gonna assess that by palpating the carotid pulse. 05:32 The reason we go for the carotid is in shock, this is the last pulse to go. 05:37 So patients who are hypotensive but still do have spontaneous circulation might lose their radial or their femoral pulses but they're always gonna keep their carotid pulse up until the last moments before they cease to have circulation. 05:52 Once again, you get a max of 10 seconds. 05:55 If you don't clearly detect a pulse in that timeframe, start CPR. 06:00 You're never gonna hurt a patient by performing unnecessary CPR, but you will absolutely hurt people by withholding CPR when in fact they don't have spontaneous circulation.

The lecture Cardiac Arrest: Initial Assessment by Julianna Jung, MD, FACEP is from the course Cardiovascular Emergencies and Shock. It contains the following chapters:

What is the number one cause of cardiac arrest?

Which of the following findings in an unresponsive patient excludes a cardiac arrest?

After summoning help, what should be your first question when evaluating an unconscious patient?