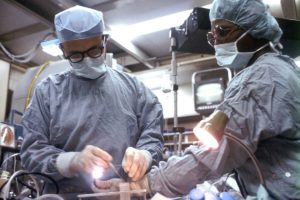 The lecture Cardiac Anesthesia & Neuroanesthesia – Anesthesia for Special Operations by Brian Warriner, MD is from the course Anesthesia in Special Situations. It contains the following chapters:

Which description applies to cardiac surgery and anesthesia?

Which description applies to neurosurgery?

How is myocardial damage prevented in open heart surgery?

Why is a metal valve prosthetic preferred?

What is the effect of ketamine on ICP?

Which of the following is NOT a complication of neuroanesthesia?