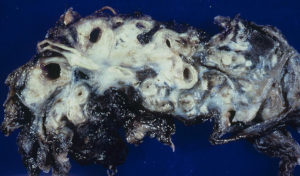 Bronchiectasis — Diagnosis and Treatment
Bronchiectasis can develop from chronic lung diseases or pulmonary infectious diseases. Since it is irreversible, it is most important to diagnose it timely. Only then, it is possible to prevent it from progressing by implementing appropriate measures. This article will introduce you to the pathophysiological and etiological basics of bronchiectasis, and will prepare you for the treatment of affected patients.
read more
Load more
Share
Ask Questions
Take Notes
Download Slides
Report Mistake
Comments
show all Show less
My Notes
show all Show less
Learning Material 2
show all Show less
Report mistake
Transcript
0 of 0

00:01 How to make the diagnosis? Well, a chest X ray is a very insensitive test for bronchiectasis, only half of the patients with bronchiectasis will have an abnormal chest X ray. This example here of a chest X ray shows really quite severe bronchiectasis, with the ring shadows being very obvious at the left base. However, that is unusual, most patients with bronchiectasis will not have an abnormal X ray or anywhere as near as abnormal X ray as this one. 00:27 And so the diagnosis requires a CT scan which I will discuss in a second. The second thing you need to do, after confirming the diagnosis, you need to assess the severity, and that’s done clinically by asking the patient how many infections a year they get and how much sputum they produce each day. Clearly, patients who are having 6 infections a year have more severe disease than those who are having only one infection a year and then somebody who is producing half of couple of purulent phlegm each day, that marks the amount of somebody with quite marked disease compared to those who only produce a teaspoon full or only intermittent amounts of sputum. Lung function is very important because as I've mentioned, obstructive lung disease is the modality that causes death and respiratory failure in these patients, so you need to do spirometry. And it’s known that if you have somebody that is colonized with Pseudomonas then they will have more severe disease, so sputum culture will identify those patients. And you need to do tests to identify the potential cause of bronchiectasis as well. Now the CT appearances are dilated bronchi, the bronchus is bigger than the accompanying vessel, that’s the basic underlining principle of diagnosing bronchiectasis in CT scan. The other thing about the bronchi is that the bronchi should normally taper as they go out the periphery, and in bronchiectasis they stay non-tapering. And you might get the consequences of airway obstructions visible in the CT scan with air trapping and “beserkisim” And when patients have really active disease with bronchiectasis it's all goo and gunk present in the small airways and that shows up as what we called tree and bud changes. 01:58 And the cause of bronchiectasis is somehow indicated by the CT scan, so most cases of bronchiectasis are both lower lobes, but some cases, cystic fibrosis, allergic bronchopulmonary aspergillosis (ABPA) tends to be more upper lobes. So how do I identify the potential cause? The history, somebody who had rheumatoid arthritis and bronchiectasis, so it’s likely that the rheumatoid arthritis is causing the bronchiectasis. If you ask the patients and they said “yes I've had these problems with my cough and phlegm ever since a bad whooping cough as a child”. That would suggest that there was a childhood infection that caused the bronchiectasis. Fertility problems, upper airways disease, indicates patients who have cystic fibrosis or ciliary dyskinesia. In this CT scan here, what you see is a very focal area of bronchiectasis in the left upper lobe and that’s due to a stricture of the bronchus feeding that area and you can see that the left main bronchus, which is just beneath the red square there, is very much narrower than the right main bronchus on the other side, and this is a post-TB obstricture. Other tests you might want to do, IgG levels that's very simple to measure in the blood and will identify patients who have IgG deficiency and that's important because they can be treated with IgG replacement therapy. There are various blood tests for allergic broncopulmonary aspergillosis, which I will discuss later. And then if you really do think that somebody has cystic fibrosis, you need to do the test for that, again, which I will discuss later and primary ciliary dyskinesia. There are very specialized tests done at particular centers for cilia function that you might consider doing. How do we treat bronchiectasis? The fundamental treatment is to try and prevent the recurrent infections and minimize chronic phlegm production and we do that by advising the patient, teaching the patient how to clear their chest of phlegm. So they do regular physiotherapy, and that will reduce the infective exacerbation frequency. You should treat the cause, clearly, so if somebody is IgG deficiency, you give them intravenous immunoglobulin therapy and that has a very beneficial effect on their health. You need to know what the bugs are present in that patients lung so that you will help guide your antibiotic therapy, so sputum culture is important and when patients present with excessive exacerbations, we will treat them with antibiotics, and unlike normal acute bronchitis, they will need treatment for 10-14 days. That will ensure that the infective exacerbations are less likely to occur quickly. Many patients with bronchiectasis get treated for 4 or 5 days with antibiotics and then the infection comes back within 3 or 4 weeks. Whereas, if they are given 14 days’ worth of antibiotics the first time, actually they'll stay clear of infection for several months. And the antibiotics are dictated by which pathogens haemophilus influenzae, moraxella, streptococcus pneumoniae, we would usually treat them with amoxicillin, co-amoxiclav, doxycycline. When patients develop pseudomonas colonization, then we are limited in which antibiotics we can give the patient and really the only oral one that's beneficial is ciprofloxacin and they frequently need intravenous antibiotics. 04:56 If somebody is getting recurrent exacerbations then prophylactic antibiotics might be necessary and they can be given as tablets or in nebulized form. And because of the airways obstruction associated with bronchiectasis you may need to treat the patient with inhalers etc, as you would normally with COPD or asthma.

The lecture Bronchiectasis: Diagnosis and Treatment by Jeremy Brown, PhD is from the course Airway Diseases.