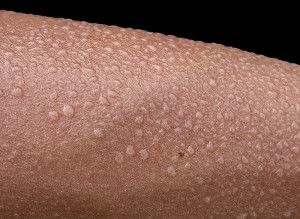 Energy Balance and Thermoregulation of Humans
The stability of energy balance and thermoregulation is essential for humans’ survival. Energy that is needed to fuel the body’s functions can be obtained from different energy sources. In this process, heat is generated and, in order to maintain the body temperature constant despite a strongly altering ambient temperature, a flexible regulatory system is required. In this context, the following definitions and formulas will be very useful for medical students.
read more
Load more
Share
Ask Questions
Take Notes
Download Slides
Report Mistake
Comments
show all Show less
My Notes
show all Show less
Learning Material 2
show all Show less
Report mistake
Transcript
0 of 0

00:00 Now, you might ask in a fever condition, why on a world would you ever want to elevate body temperature? There are couple of theories out there why an internal body temperature increase during a fever maybe an advantage. The one is, higher internal temperatures do decrease bacterial growth. They increase lymphocyte proliferation. Therefore, there are lymphocyte available. 00:27 They also in vow neutrophils to extra vascularize, meaning that they go from within the blood to albumin, or outside of the blood, so they can maybe attack a various infection. 00:40 But interesting, even though there are two or three mechanisms by which an elevated temperature maybe an advantage. Studies have shown that if you give antipyretic therapies, such as a COX inhibitor, like Tylenol or aspirin, usually don’t affect the outcome of someone’s illness. And so, often times, the physician will undergo antipyretic therapies simply because it doesn’t really affect their outcomes and it decreases the fever of the patient. 01:12 Now, what are the some other ways in which body temperature does increase? It could have be induced by something like a virus through a number of different types of bacteria especially Gram-negative bacteria such as lipopolysaccharides or LPS. 01:28 And this is often times you use to experimentally to induce fever in animals. 01:33 There are also certain fungi that will increase body temperature or causes fever. 01:41 So, besides the microbial mechanisms to increase body temperature, there are some non-microbial mechanisms. One of them is: antigens, such as if you’re rejecting a foreign particle, inflammatory agents such as things like asbestosis or other types of agents, that which you’re immune system will try to attack. There are also can be some plant particles that cause and fever. 02:08 And finally, there are host-derived mechanisms. So this are things that you produce yourself such as bile acids, or urate crystals that actually can cause an increase in body temperature if they rise to a high enough level. 02:24 Now, what are the different seemingly molecules that increase temperature? There are four primary ones that we need to concern ourselves with: The first is Interleukin beta, Interleukin 6, Tumor Necrosis Factor alpha, and Interferon alpha, are the main contributors to an increase in temperature and use by fever. 02:46 There are host of others but the four primary ones are the most important. 02:52 Now, how do we get this cytokine signals to the brain to actually causes to have a fever? There are couple of mechanisms that are likely involved. 03:02 The first is, that these substances can signal through the blood-brain barrier, through the endothelial cells that cause an increase in prostaglandins, which could cause a fever. 03:16 It could go through perivascular macrophages, also associated with the blood brain barrier, to increase the amount of prostaglandins. 03:26 And finally, there is through a mechanism through the astrocytes involving Rank or Rank L that increase prostaglandin synthesis. These all are central mechanisms. There is one peripheral one and that is peripheral macrophages, whether be in the lungs or the liver can increase prostaglandin synthesis. And these prostaglandins may be able to directly signal the brain. 03:54 Now, how would a peripheral signal get to the brain? This is something that is a hard to think about because it has to make it through the blood-brain barrier.

Which of the following are classified as plant lectins able to cause a febrile response?

Why is an increase in body temperature, such as a fever, advantageous to body homeostasis?

Which of the following is a primary pyrogenic cytokine?

By which peripheral signaling mechanism do the pyrogenic cytokines induce fever?

What gram-negative bacterial product is most commonly responsible for fevers?

Which of the following statements about COX-2 is correct?

I am from Peru, and Dr. Wilson's class seemed very good to me, very concise and the key points incredible, very satisfied with the presentation.

I am from Peru, and Dr. Wilson's class seemed very good to me, very concise and the key points incredible, very satisfied with the presentation.