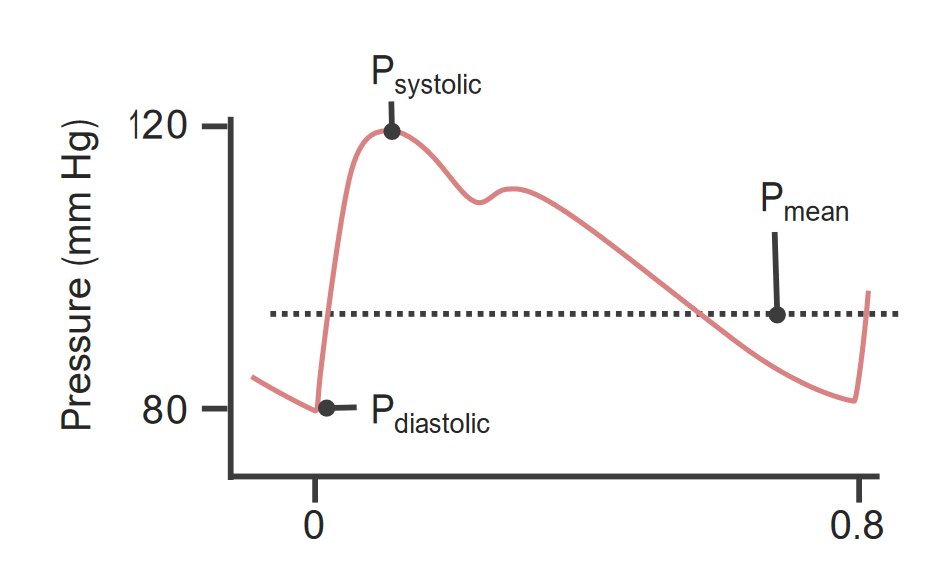 Arterial Pressure Regulation
Mean arterial pressure (MAP) is the average systemic pressure in the arteries. The MAP is tightly regulated to help maintain appropriate perfusion and is primarily determined by the cardiac output (CO) and the systemic vascular resistance (SVR). Cardiac output is determined by the HR and the stroke volume (the volume of blood ejected by the heart each beat). The HR is primarily regulated by the effects of the ANS on the sinoatrial node in the heart, while stroke volume is determined by the preload, afterload, and inotropy (or contractile strength) of each heartbeat. The SVR is regulated by a number of factors, including the ANS, the arterial baroreflex, circulating catecholamines, the RAAS, and several other hormones.
read more

Hypertension
Hypertension, or high blood pressure, is a common disease that manifests as elevated systemic arterial pressures. Hypertension is most often asymptomatic and is found incidentally as part of a routine physical examination or during triage for an unrelated medical encounter. The disorder can usually be managed with lifestyle modification and medications, but occasionally, vascular intervention or surgery are required. Age, sex, smoking, obesity, and diet are contributing factors to hypertension, which can lead to heart attack, stroke, congestive heart failure, and CKD if not managed properly. Many individuals with hypertension are undiagnosed or undertreated.
read more
Load more
Share
Ask Questions
Take Notes
Download Slides
Report Mistake
Comments
show all Show less
My Notes
show all Show less
Learning Material 2
show all Show less
Report mistake
Transcript
0 of 0

00:00 Welcome back. Now we're going to do something that will be a little bit blood pressure raising. That is to say we're going to talk about hypertension. Sorry for the bad pun. 00:12 Basic blood pressure regulation involves a combination of peripheral resistance. 00:18 Remember this is regulated at the level of the arterioles, but it's also going to be affected by cardiac output. So, how much does the heart squeeze and what rate does the heart squeeze? Those 2 combinations, the peripheral resistance cardiac output will have, as their readout functionally, blood pressure. Let's talk about how peripheral resistance is regulated and there are lots and lots of inputs at the level of the arterioles. There are several humeral factors. So there are constrictors first of all and we'll talk more about each of these, but angiotensin II catecholamines, thromboxane, leukotrienes and endothelium are all things that will increase the vascular tone at the level of the arterioles causing them to constrict and which will raise blood pressure. There are also dilators. 01:16 So, for every positive effect there is also a negative effect? And the dilators include prostaglandins. In that case, prostacyclin PGI2, kinins, nitric oxide. There are also neuro factors, neuronal factors, and constrictors include alpha-adrenergic stimulation. Why is it important to know this? Because you will give drugs that will block adrenergic receptors. And if you give things that block the alpha-adrenergic receptors, you will cause relaxation. On the other hand, if you want to dilate the vessels, you use a beta-adrenergic stimulus. If you want to block that, if you want vessels to constrict because your patient has a very low blood pressure you will use beta-adrenergic antagonists. Makes sense? Okay, so we've talked about things that affect peripheral resistance. There are also things that affect the cardiac output. Chief among these is going to be the blood volume, and that's going to be very much reliant upon sodium content. Mineralocorticoids are also going to influence that so aldosterone produced by the adrenal cortex will also affect blood volume. And then atrial natriuretic peptide, which is a peptide hormone produced by atrial cardiac myocytes and also to some extent by ventricular cardiac myocytes that will influence blood volume. There are other cardiac factors that will impact cardiac output, that's heart rate. If the heart beats more vigorously or at a faster rate, then we will have increased cardiac output. And finally, there are local factors. So in the tissues themselves, it's not enough that we regulate things at the level systemically of arterioles but we also want to be able to regulate in local tissue beds what's going on. So if the tissue becomes hypoxic or the pH drops becomes more acidic, that's a sign that we don't have enough of the blood supply and so the local pericytes muscle cells will autoregulate in that setting to increase blood flow that will locally increase in some vascular bed blood pressure. Okay, so let's work through the loop. So let's say in a normal person your blood pressure goes up and it stays up for a period of time, there are regulatory pathways to try to bring it back to normal. 03:43 That's normal homeostasis. So we have cardiac volume sensors. These are in your atria and to some extent the ventricles. This is going to be responsible for secreting atrial natriuretic peptide. Too much blood pressure, too much volume that atria dilates and the peptide gets released. When that happens, it causes the kidneys to excrete sodium and water so blood volume goes down. Nice. That reduces the blood volume and the atrial natriuretic peptide will also cause systemic vasodilation. Cool. We will hopefully bring blood pressure to a better place. Perfect. That's part of the loop. Now let's say that blood pressure is too low. What do we do about that? Okay, so with low blood pressure, we have ways to sense in the kidneys, in particular, a low volume or a low resistance. And for example, this can be caused also by renal artery stenosis. When the kidneys sense that there is too little flow, then the juxtaglomerular apparatus, the GJA, senses that and the juxtaglomerular cells next to the afferent arteriole produce renin, another peptide hormone. That renin acts on circulating angiotensinogen made by the liver and converts it to a smaller peptide, angiotensin I, and then as angiotensin I circulates endothelium in many tissues via the angiotensin converting enzyme or ACE will act on angiotensin I making it a smaller peptide angiotensin II which does all the magic, has all of the blood pressure raising activities. That angiotensin II drives aldosterone production, the mineralocorticoid made by the adrenal cortex. That will cause the kidneys to resorb sodium and with it obligate water which will increase blood volume. Yay, we're on our way to getting our blood pressure back up. It will also cause vasoconstriction. So everything that the atrial natriuretic peptide was doing, this is reversing that to bring our blood pressure back up. So now, we've restored hopefully the blood pressure by combination of increasing blood volume and vasoconstriction and overall we have a complete cycle where, if everything is intact, we maintain normal blood pressure. Okay, all these points along here are important to understand because they are potentially important therapeutic target. So angiotensin-converting enzyme, ACE, we have a number of drugs that will block ACE activity, that will tend to drive blood pressure down. Just as that for example. 06:42 We want to maintain normal tension.

The lecture Blood Pressure Regulation by Richard Mitchell, MD is from the course Hypertension.

Which of the following molecules causes vasoconstriction?

If ACE (angiotensin-converting enzyme) is blocked, the level of which molecule will be decreased?

Which of the following neuronal factors regulates the peripheral resistance of blood vessels?