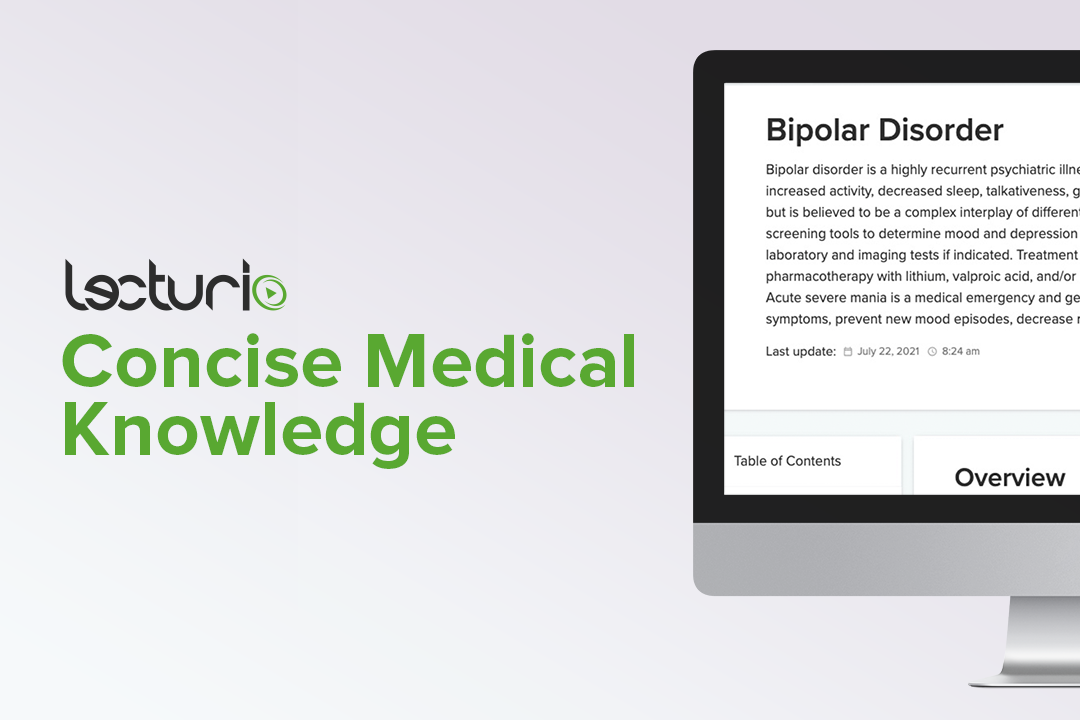 00:01 Let’s talk about the important aspects of bipolar disorder. 00:07 Starting with defining it. 00:09 Bipolar disorder is a mood disorder and it’s characterized by episodes of mania, hypomania, and also major depression. 00:19 There are a lot of different types of bipolar disorder. 00:24 So let’s consider bipolar I, this is defined by at least one manic episode and it's often accompanied by depressed or hypomanic periods. 00:35 Bipolar type II is marked by at least one hypomanic episode and at least one major depressive episode. 00:44 And there are absolutely no manic episodes associated with bipolar type II. 00:50 There can be mixed episodes, which is when depressed mood coexists with manic symptoms. 00:56 Patients here meet criteria for both depressive and manic episodes at the same exact time. 01:04 There can also be rapid cycling. 01:06 Rapid cycling is the alternating periods of hypomanic periods with mild to moderate depressive symptoms intermixed over the course of two years. 01:18 Bipolar disorder epidemiology is important. 01:21 It’s estimated that the lifetime prevalence among adults worldwide is 1-3%, making it a fairly common disorder. 01:30 The mean age of onset for bipolar type I is about 18 years old and for bipolar type II, it’s 20. 01:38 It equally affects men and women with a ratio of 1:1 and patients will often present first in their primary care settings, not to the psychiatrist. 01:48 Here’s a question for you, what percentage of individuals with a history of one manic episode will go on to have another manic episode? The answer there is 90% and this of note if they’re not getting treatment for their bipolar. 02:06 So unmanaged illness is going to have a very high occurrence of repetitive episodes. 02:14 And people are particular susceptible to having mania during times when their sleep becomes imbalanced. 02:21 So especially when somebody travels, maybe changes time zones or if for some reason, they need to stay up at night, maybe they’re now working the night shift or something of this sort. 02:33 Bipolar disorder tends to be underdiagnosed and it’s often misdiagnosed especially in ethnic minorities as schizophrenia. 02:42 The differential diagnosis of bipolar disorder is broad. 02:45 And like every psychiatric disorder, it is imperative that you rule out general medical conditions that can mimic bipolar. 02:54 So here’s a list of a few medical conditions that you really do need to rule out before labelling somebody with a psychiatric mood disorder. 03:02 These are neurological disorders, things like epilepsy or seizures, especially of the temporal lobe, multiple sclerosis, viral encephalitis and cerebral tumors. 03:14 Also, metabolic problems like hypothyroid, Cushing’s syndrome, neoplasms, HIV infection, and systemic disorders like B12 deficiency, carcinoid syndrome and uremia. 03:28 Just like every major psychiatric disorder, we must also rule out that the symptoms are produced by a substance or medication. 03:38 So here are a few common substances or medications that can actually mimic bipolar disorder. 03:45 Steroids, sympathomimetics; bronchodilators, people use commonly for asthma; levodopa, antidepressants, this is an important note. 03:55 So antidepressants can actually unmask a manic episode in somebody who’s at all susceptible for having one. 04:04 Also, anything that increases dopamine and any kind of alpha agonists can also mimic bipolar disorder. 04:14 This is a nice chart where you can look at the various types of bipolar and put it into some visual context. 04:21 So we think if euthymia is our kind of steady state, how we normally are, and usually there are some ups and downs within that. 04:28 However, bipolar is when things become more extreme, the highs become really high and the lows get really low. 04:35 And so with bipolar I, that looks like mania. 04:39 Bipolar II, not quite mania, less severe episodes we call hypomania, but more depressed episodes and cyclothymia of course being that rapid shifting within a two-year period.

The lecture Bipolar Disorder: Definition, Types and Diagnosis by Helen Farrell, MD is from the course Mood Disorders.

Which of the following sentences best describes type 2 bipolar disorder?

All the following statements regarding bipolar disorder are true, EXCEPT:

Which of the following agents unmask manic episodes in patients with bipolar disorder?

Felicitacion
By Jotace Z. on 23. December 2018 for Bipolar Disorder: Definition, Types and Diagnosis

Felicitacion
By Jotace Z. on 23. December 2018 for Bipolar Disorder: Definition, Types and Diagnosis