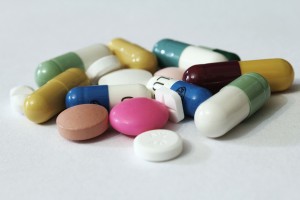 00:01 How is it that these two classes of drugs are working. Well it is all through the GABA A receptor. This beautiful illustration was made by our IT team, Mandy and Jenny, so kudos to them because it's a fantastic illustration. 00:18 And it really clearly lays out where each of the drugs works on the GABA A receptor. It's a very complex macromolecule that spans the membrane. It's made up of 5 subunits and take a look at each of the points of interaction with different drugs. 00:34 So you can see that GABA has two particular acitivity points. Benzodiazepine has an activity point in between the alpha and gamma subunit. A drug like zolpidem which is one of those atypical drugs also acts at a similiar site but just a little bit further down. And you can see that the barbiturates are transmembrane and they act almost solely on the alpha subunit. 01:00 Now they act differently. And this is going to be a recurring theme that I'm going to mention several times in several lectures. 01:06 And you can guarantee yourself that this is going to be on your exam. So recognise that the GABA A receptor is important for your exams and recognise how these drugs interact with the GABA A receptor is going to be important for your exams. 01:22 Once you are out in clinical practice and don't have to write exams anymore, you can forget what I just told you until your next set of recertification exams. Let's start off with the benzodiazepines. So the GABA receptor that responds to benzodiazepines is present in many regions of the brain. It's present in the cerebral cortex, and in the cerebral cortex benzodiazepines can cause confusion and amnesia. It's present in the thalamus. And this is where you have disinhibtion, sedation and motor inhibition because that's what the thalamus does after all. Benzodiazepines also work in the limbic structures of your brain. Now remember limbic structures are the lizard part of your brain. It's the oldest part of our brain. 02:07 It's where have our core emotion and our most base instincts. And anxiety is a base emotion. It's a survival technique. 02:15 We feel anxious when we know we are in danger. Now, benzodiazepines will inhibit activity in the limbic structures and that's how it works to reduce anxiety. It's also partly why we get sedated with benzodiazepines too. How do benzodiazepines work with the GABA receptor. How it does this is it causes increased flow of chloride through the channel. It increases the frequency of opening by the channel. And by doing this it helps GABA to inhibit the gamma subunit. It binds between the alpha and gamma units and it acts through many types of receptors all over the brain as I mentioned before. So remember that benzodiazepines increase the frequency of opening. Benzodiazepines are fantastic for anxiety states. Alprazolam or Xanax is the most prescribed anti-anxiety medication in the United States. Other ones include clonazepam, lorazepam and diazepam. We sometimes do use tricyclic antidepressants for anti-anxiety and we can refer to lecture number 9 the antidepressant section to understand a little bit more about how TCAs work. Benzodiazepines are used for muscle spasticity and diazepam is probably the most commonly used for this indication. And we also use benzodiazepines for ethanol or alcohol withdrawal. We use a long acting benzodiazepine for this. And a good example of a long acting benzodiazepine is diazepam again and there is another one called chlordiazepoxide. But if you remember diazepam I think that's the more important one. Flumazenil is an antagonist to the benzodiazepines. You can see that it binds to an area just under where the benzodiazepines bind. It's used as a reversal agent in overdoses. And it binds at a site inferior to the benzodiazepines so that the benzodiazepine cannot bind to the gamma subunit. Flumazenil, antagonist, antidote to the benzodiazepines. So just remember that. The trade name is Anexate. I think it's safe for you to remember the trade name. And the reason why is because when you look in crash kits, it's going to be labelled Anexate and not necessarily Flumazenil.

The lecture Benzodiazepines – Sedative Hypnotics by Pravin Shukle, MD is from the course CNS - Pharmacology.

Barbiturates interact with which subunit(s) of the GABA-A receptor?

Which of the following is NOT a use for benzodiazepines?

Great explained classes, they are short and cover all subjects

Great explained classes, they are short and cover all subjects