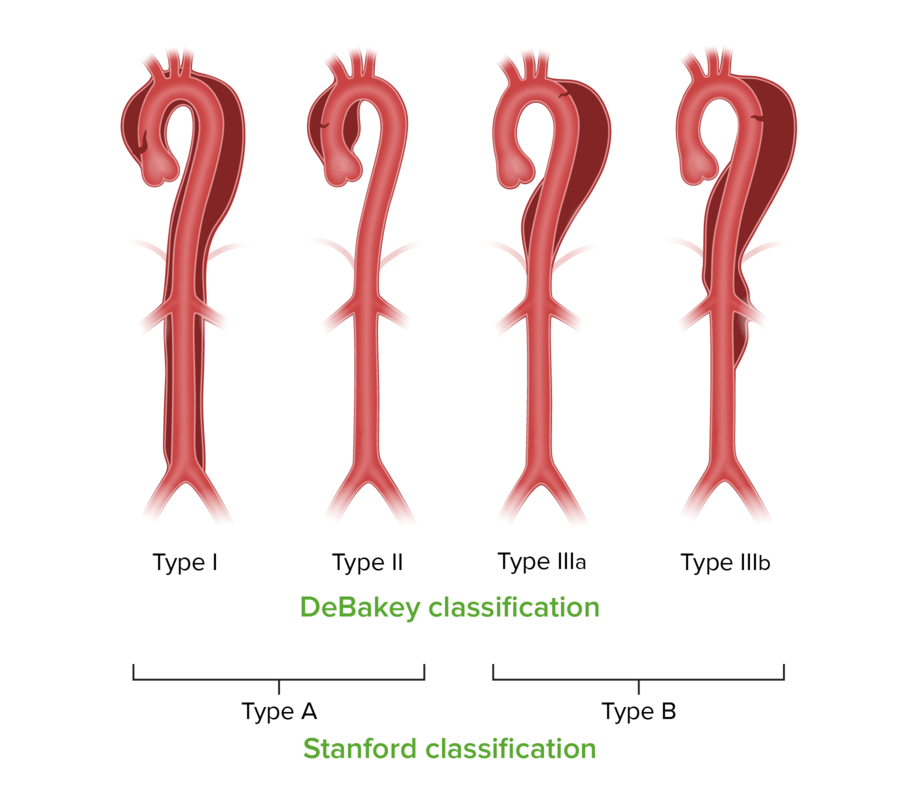 00:01 Aortic Dissection. 00:02 So this is more than just aneurysm. 00:05 This is in fact, now we have had such dysfunction, or abnormal matrix production, that the media has become weakened and now blood through a small tear in the intima or by rupture of a vessel vasa vasorum. 00:23 In the media, we get bleeding and separation of the layers of the media. 00:29 Aortic dissection is in general a surgical emergency, particularly when it involves, the proximal aorta, the ascending aorta, and the aortic arch. 00:39 We'll talk about that in a minute. 00:41 About 5-30 cases per million people per year. 00:44 So it's not individually a high incidence. 00:47 But overall for 350 million people, there's significant numbers of cases into the 1000s that happen every year in the United States. 00:57 It's more common in men than in women. 00:59 And that's important because the hypertension that usually is the underlying predisposition is much more common in men than in women. 01:06 It's more common in African Americans than Caucasians, although the numbers on this are perhaps changing. 01:13 The peak incidence occurs between ages 50 to 65. 01:17 So hypertension, is the number one cause. 70% of dissection patients where we've separated the layers of the media will be in patients who have long-standing hypertension as the major etiology for the medial weakness. 01:32 Atherosclerosis can also be a cause of disease and maybe 10-15% of cases. 01:38 And again, it's because we've increased the diffusion distance from the lumen into the inner third of the media. 01:43 So we're going to get weakening of the inner third of the media. 01:48 Obviously, connective tissue disorders like Marfan Syndrome, Loeys-Dietz syndrome, Ehlers-Danlos Syndrome, all of those are going to give rise to an increased risk of aortic dissection. 01:59 The media is not a robust structural entity in these various diseases. 02:05 And it takes very little for blood under pressure to kind of unzipper that media and it can be catastrophic. 02:15 The histology in areas where we're going to see dissection shows basically cystic medial degeneration, that same accumulation of hyper sulfated glycosaminoglycans and diminished elastic tissue and collagen synthesis. 02:30 That's what's indicated with the arrow there. 02:33 Other causes for aortic dissection can be inflammatory. 02:37 So certain forms of vasculitis such as a giant cell arteritis, or giant cell aortitis can give rise to damage and destruction of the media, which will give rise to weakening and therefore potential for having a dissection that separates the planes of the media. 02:56 Takayasu Arteritis. 02:58 Typically involving the great vessels that come off the arch is just another form of vasculitis that can do this. 03:06 And interestingly enough anatomic abnormalities bicuspid aortic valves by whatever mechanism that is driving the formation of a bicuspid valve. 03:16 Shown there in the middle image. 03:19 The left hand side is a tricuspid aortic valve. 03:22 The one second is a bicuspid aortic valve, and you can actually have increased calcification, which is what's shown in the middle picture, or you can have Myxomatous degeneration and insufficiency of the valve. 03:34 Regardless of which way the valve goes, in patients with a bicuspid aortic valve, they also have a propensity for abnormal aortic roots. 03:44 There is something about the genetics driving the formation of the bicuspid valve that also impacts the smooth muscle cells and their synthetic capacity in that proximal aorta. 03:54 So they are prone to aortic root dilation and dissection. 04:00 Coarctation of the aorta may also have a cause by increasing local turbulence. 04:06 And by having abnormal smooth muscle cell biology. 04:10 The arrow is pointing to an area on this aortogram after the great vessels of the arch are going up to the head and neck and you see the narrowing of the aorta there. 04:23 Distal to that is where you can have dissections in the setting of aortic coarctation. 04:30 Aortic dissections can also happen following rapid deceleration. 04:34 Trauma, so we're looking here at a horrific automobile accident. 04:38 The driver suddenly decelerated and the heart internal organs pulled forward. 04:46 The heart is actually tethered to the aorta and the pulmonic architecture via the ligamentum arteriosum. 04:54 And when you have a sudden deceleration and pulling of the heart forward like that that can rip the aorta and cause a dissection. 05:02 So typical dissections involved with motor vehicle accidents such as this happen at the level of the ligamentum arteriosum, and not where most other aortic dissections occurred. 05:14 Let's talk about that in a minute. 05:18 Iatrogenic causes of aortic dissection include prior cardiac surgery or aortic surgery where you have cut the vessels of the vasa vasorum, again, causing weakness of the wall can occur with cardiac catheterization. 05:30 You are shimmying up a catheter from, say a femoral artery up into the arch of the vessels and it's possible with some catheters to actually undermine the intima and get into the media and cause a dissection plane. 05:46 So cardiac catheterization can do this as well. 05:49 Certain drugs basically by causing transient elevations in blood pressure, such as amphetamines and cocaine can also cause aortic dissections in an otherwise weakened wall. 05:59 Most aortic dissections will occur within the first 10 cm above the aortic valve. 06:06 So you can see the myocardium at the bottom, you can see the aortic valve, and then you see a transverse tear that's occurring in this case about 3 cm above the aortic annulus. 06:18 That's the classic location for the vast majority of aortic dissections. 06:23 Trauma associated aortic dissections occurred at the ligamentum arteriosum, as I already said, and that's what's being shown here. 06:30 In the circles we are seeing where the tear occurred in a patient who had a sudden deceleration trauma, where the heart got pulled forward in that acute stop and pulled and tugged on the ligamentum arteriosum and induced a tear at that location.

The lecture Aortic Dissection: Epidemiology, Etiology and Pathology by Richard Mitchell, MD is from the course Aortic Disease.

In connective tissue disorders (e.g., Marfan syndrome, Ehlers-Danlos syndrome, and Loeys-Dietz syndrome), what location of the aorta is weak and susceptible to damage?

Which type of trauma increases the chance of aortic dissection?

Which drug can increase the risk of aortic dissection?