Monoamine Oxidase Inhibitors
Monoamine oxidase inhibitors are a class of antidepressants that inhibit the activity of monoamine oxidase (MAO), thereby increasing the amount of monoamine neurotransmitters (particularly serotonin, norepinephrine, and dopamine). The increase of these neurotransmitters can help in alleviating the symptoms of depression. Selective inhibitors of MAO type B can also be used for the treatment of Parkinson disease. Other uses include for bulimia nervosa and panic disorder. The major adverse effects include serotonin syndrome and hypertensive crisis. Special care should be taken to avoid other serotonergic medications and tyramine-containing foods.
read more 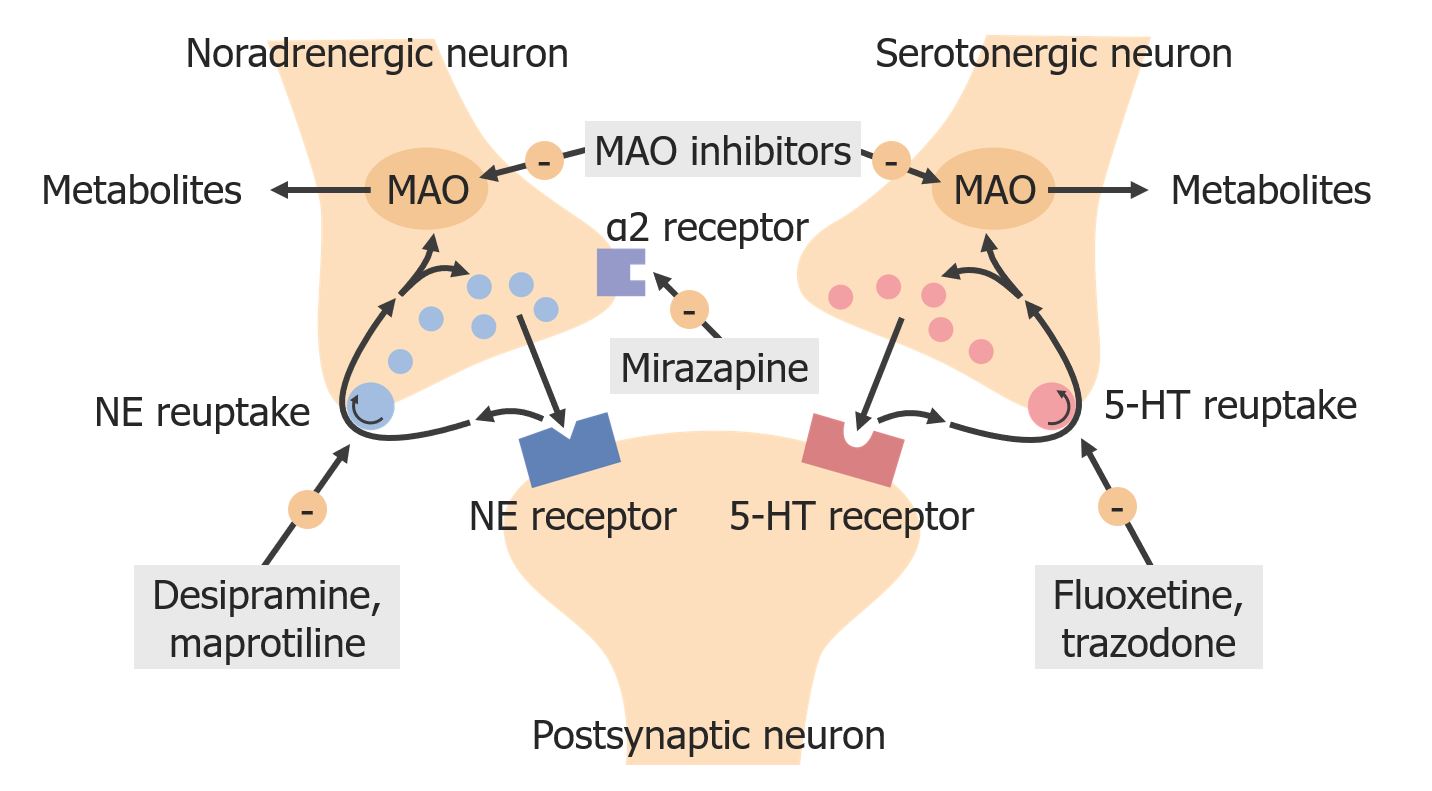 Serotonin Reuptake Inhibitors and Similar Antidepressant Medications
Antidepressants encompass several drug classes and are used to treat individuals with depression, anxiety, and psychiatric conditions, as well as those with chronic pain and symptoms of menopause. Antidepressants include selective serotonin reuptake inhibitors (SSRIs), serotonin-norepinephrine reuptake inhibitors (SNRIs), and many other drugs in a class of their own. Antidepressants are indicated as the 1st-line treatment for anxiety disorders and major depressive disorder (MDD) and are contraindicated in cases of current or recent use of monoamine oxidase inhibitors. Therapeutic response to antidepressants takes 2–4 weeks and complete benefit is not seen until up to 8 weeks, which is attributed to downstream cellular responses necessary for eliciting a physiologic response. In general, serotonin-affecting antidepressants are well tolerated, but caution must be taken while prescribing them in combination with other drugs that inhibit or induce the same hepatic cytochrome P450 enzymes to prevent increased levels of both drugs. An overdose can be life-threatening. It is important to recognize the signs and symptoms of SSRI/SNRI overdose to enable prompt treatment in an emergency setting.
read more
Load more
Share
Ask Questions
Take Notes
Download Slides
Report Mistake
Comments
show all Show less
My Notes
show all Show less
Learning Material 2
show all Show less
Report mistake
Transcript
0 of 0

The lecture Antidepressants by Helen Farrell, MD is from the course Mood Disorders. It contains the following chapters:

Which of the following drugs acts by blocking the reuptake of noradrenaline and serotonin?

Which of the following conditions is not treated with Selegiline?

Which of the following groups of antidepressants produces hypertensive crisis when taken with tyramine-rich foods?

All of the following statements regarding Citalopram are true, EXCEPT:

Which of the following can be used to treat sexual dysfunction related to selective serotonin reuptake inhibitors (SSRIs)?

What neurochemical changes are seen with duloxetine use?

Which of the following atypical antidepressants can also be used as a sleeping aid?