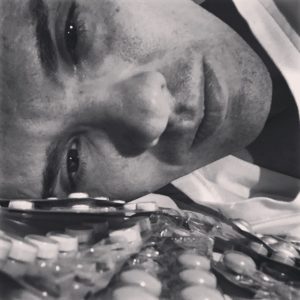 00:00 So let's talk a little bit about other drugs that are used to manage pain. Anti-depressants are widely used and have been used for years. But they're used not because of their primary effect on depression, but because they increase norepinephrine and serotonin activity in the spinal cord. And they seem to reduce response to pain, and then in addition, they often activate the depressed chronic pain patient. 00:29 So patients who have chronic pain, very commonly are depressed. These drugs seem to be particularly effective for diabetic neuropathy and postherpetic neuralgia. 00:41 And are often used in the treatment of those two disorders. The two commonest ones are Amitriptyline and Nortriptyline, but there's also Imipramine, there's a whole series of these things. So the newer antidepressant drugs, the Serotonin reuptake inhibitors such as Paxil or paroxetine, and even newer drugs, the Serotonin-norepinephrine reuptake inhibitors such as duloxetine, have also been used to treat peripheral neuropathy and seem to have a positive effect. And then in addition, they also have their antidepressant effect, which can be useful in these patients.

The lecture Antidepressants – Analgesics, Case Reports and Obstetrical Pain by Brian Warriner, MD is from the course Anesthesia.

Why are tricyclic antidepressants used for pain management?

Which drugs are used to treat diabetic neuropathy?