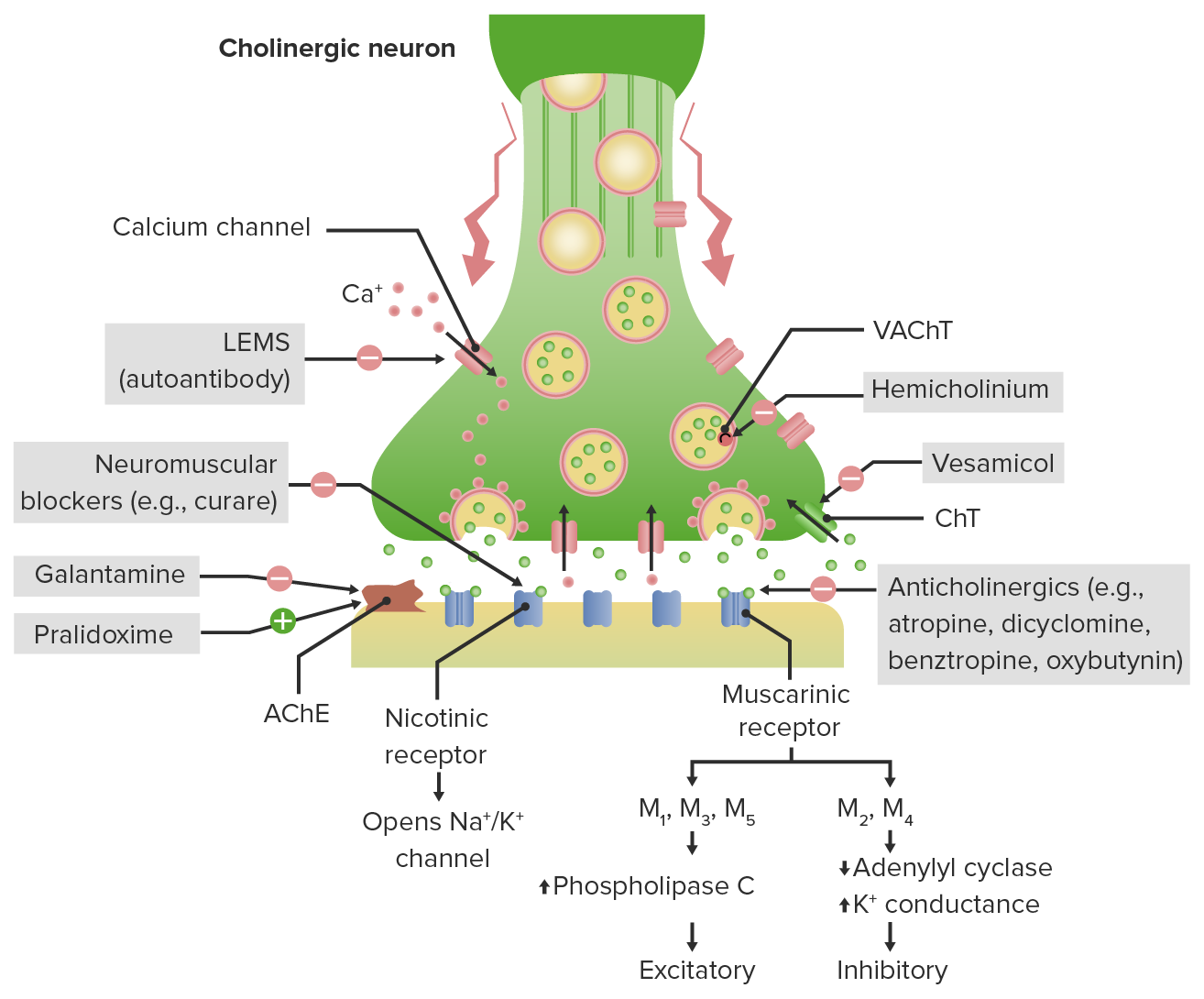 Anticholinergic Drugs
Anticholinergic drugs block the effect of the neurotransmitter acetylcholine at the muscarinic receptors in the central and peripheral nervous systems. Anticholinergic agents inhibit the parasympathetic nervous system, resulting in effects on the smooth muscle in the respiratory tract, vascular system, urinary tract, GI tract, and pupils of the eyes. These medications are used in the management of a wide range of diseases, most notably in the treatment of overactive bladder, irritable bowel syndrome, chronic obstructive pulmonary disease (COPD), and allergic rhinitis. Atropine specifically is used in emergency medicine in the advanced cardiac life support (ACLS) protocol for severe bradycardia and as an antidote to organophosphate poisoning with insecticides or chemical warfare agents. Atropine is also used in anesthesiology as an antisialagogue or to reverse neuromuscular blocking agents. The term â€œanticholinergicâ€ is often used to describe the adverse effects of drugs with anticholinergic properties (e.g., tricyclic antidepressants); these include dry mouth, constipation, blurred vision, and orthostatic hypotension.
read more

Autonomic Nervous System
The ANS is a component of the peripheral nervous system that uses both afferent (sensory) and efferent (effector) neurons, which control the functioning of the internal organs and involuntary processes via connections with the CNS. The ANS consists of the sympathetic and parasympathetic nervous systems. The efferent nerve fibers that terminate in the endocrine, vascular, and visceral structures coordinate the inner workings of the body in response to several afferent inputs. The sympathetic and parasympathetic neural circuits coordinate stress responses and relaxation responses, respectively. The enteric nervous system regulates visceral organ function. A balance between these systems results in homeostasis, whereas an imbalance leads to pathological conditions.
read more
Load more
Share
Ask Questions
Take Notes
Download Slides
Report Mistake
Comments
show all Show less
My Notes
show all Show less
Learning Material 2
show all Show less
Report mistake
Transcript
0 of 0

00:01 Let's move on to anticholinergics. 00:04 Cholinergic receptor antagonists can be anti-nicotinic and these are ganglion blockers, neuromuscular junction blockers. 00:15 Let's talk about the ganglionic neurons remember I was telling you that, gangs go out in smoke so ganglionic neurons are nicotinic. 00:24 Let's move on to the smooth muscle and neuromuscular neurons. 00:28 Now, the smooth muscle neuromuscular neurons are muscarinic. 00:36 The other types of end organs are sweat glands which are also muscarinic. 00:42 How do I remember that? Musky smell, means, sweat and muscles, so that's how I tend to remember, That smooth muscle and neuromuscular neurons are muscarinic. 00:56 What are these antagonists? Anti-muscarinic antagonists, the non-selective one is atropine, I already told you that it's used as an antidote in sarin gas exposure. 01:08 It's also used in cardiac codes, the M1 selective antimuscarinic drug. 01:14 Now drugs ending in “oxime,” like pralidoxime are cholinesterase regenerators. 01:22 We spoke before about cholinesterase inhibitors, this is where the double negative comes in the central nervous system. 01:30 A cholinesterase inhibitor, inhibits the enzyme that breaks down acetylcholine. 01:36 So, a cholinesterase inhibitor increases the amount of acetylcholine. 01:44 A cholinesterase regenerator increases cholinesterase, so, you reduce the amount of acetylcholine in the synaptic cleft. 01:55 So, pralidoxime and other drugs in its class will act on that synaptic cleft to cause that effect. 02:06 Okay, we also use anti-muscarinic agents in Parkinson’s disease. 02:11 Benztropine, biperiden, triphenidyl, these are drugs, that we're going to talk about later. 02:16 We use scopolamine in motion sickness. 02:20 It's available as a pill or patch, most people know what a scopolamine patch is. 02:24 It's a very effective anti-nauseant. 02:28 And one other thing that I think you need to remember for when you're on the wards, is benztropine. 02:33 Benztropine is an antidote to acute dystonia, where people are contracted and unable to move and they often will have their head turned to one side as far as it'll go. 02:45 So benztropine is an antidote to that. 02:47 We're going to cover that in a later lecture as well. 02:50 What are the effects on the eye? Anti-muscarinic agents cause dilation, okay. 02:59 Atropine acts over 72 hours, homatropine acts over 24 hours and this one acts over 30 minutes. 03:10 Now atropine is derived from the belladonna plant, which I have illustrated here. It's a tertiary amine, it's lipid soluble, it does cross the blood-brain barrier and its duration of action is around four hours. 03:26 In the lung, anticholinergics, cause mild bronchodilation. 03:30 So, the prototypical drug for the lung is ipratropium, it's also known as atrovent. 03:36 So atrovent is the green inhaler. 03:38 The other bronchodilators like tiotropium are also available and are really making a huge impact on respiratory therapy. 03:47 We're going to be talking about that in our respiratory pharmacology lecture. 03:52 There is also a mild reduction in airway secretions. 03:56 Atropine can sometimes be used as a direct agent, when you're trying to intubate somebody and they have tons of mucous secretions and you can't see where you're going with the intubation instrumentation. 04:08 We've also used it, I’ve also used it personally, when I’m doing bronchoscopies, because it does reduce airway secretion. 04:17 Okay, what about the effect on the gut it's an anti-muscarinic agent. 04:22 Old treatments for peptic ulcer disease, we no longer use them. 04:25 I just mentioned them here for your own interest, it is not going to be on an exam and it's not a big part of our thought processes anymore. 04:35 In terms of the urinary tract, anti-cholinergic effects reduce urgency and mild cystitis and overactive bladder syndrome. 04:44 These are the various drugs that we have available. 04:47 They're very commonly used in nursing homes. 04:50 It's worthwhile knowing these drugs when you get out into practice. 04:54 Unfortunately, we use the trade name so much, that the generic names kind of fallen by the wayside and it's because they sound so much like they would relieve urinary symptoms and they are listed here. 05:09 Okay, what about toxicity. 05:12 So, what happens if you take too many anticholinergics. 05:16 We call this anticholinergic crisis and this is a very old saying and patients are dry as a bone, hot as a pistol, red is a beat and mad as a hatter. 05:27 So, patients who are dry, have what we call, “Atropine fever.” They're very dry, they're very warm, they've lost the ability to properly thermoregulate. 05:37 They're “Red as a beat,” because they have peripheral vasodilation and “Mad as a hatter,” they will have psychosis and very bizarre kind of behavior. 05:50 Treat anticholinergic toxicity with physostigmine. 05:55 That is the antidote for that type of toxicity. 06:00 Well, there you have it, we did a very difficult topic, I think you guys are great to have lasted until the end of this lecture. 06:06 This is the kind of stuff that does show up on exams, so, if you want to watch this lecture again, I do encourage it. 06:13 I found it difficult when I was studying, so, I tried to make it as easy as possible and we do have some questions for you, so, I encourage you to do practice questions in this, so, that when you get to your exam, you'll nail it. 06:25 Thank you very much.

The lecture Anticholinergic Drugs by Pravin Shukle, MD is from the course ANS - Pharmacology.

Receptors in the autonomic ganglions are mainly of which of the following types?

Which of the following best describes hexamethonium?

Which of the following receptors typically occurs in the neuromuscular junction of skeletal muscles?

Which of the following receptors typically occurs in the brain, heart, and smooth muscles and mediate parasympathetic activity?

Which of the following medications is commonly used in the acute treatment of dystonic reactions?

Atropine can cause all EXCEPT which of the following?

Which of the following medications may be used to treat anticholinergic poisoning?

Just what is needed for the clinics and exam Bare minimum leads to better retention and the results.

Just what is needed for the clinics and exam Bare minimum leads to better retention and the results.