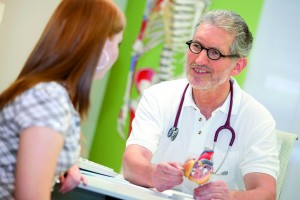 00:01 Let's move on to the androgens. 00:04 The prototypical androgen is testosterone. 00:07 It is produced in the testes, in the adrenal gland, in the ovary, and in the skin. 00:11 In plasma, it is bound to sex hormone binding globulin or SHBG. 00:18 It is converted to deoxy-testosterone, which is going to be the active compound in this system. 00:25 Now, obviously, testosterone is going to give masculinizing characteristics. 00:30 You will have an increased hematocrit, positive nitrogen balance, normalizing your increasing bone density, more virilization which includes facial hair. 00:43 It is often used in men for replacement therapy. 00:47 We’re starting to diagnose low testosterone levels more and more often in men and we’re starting to see that they have significant biomedical issues with low testosterone and we’re starting to treat them quite effectively. 01:02 Rapid hepatic metabolism can sometimes occur with these medications and that's why oral medications aren't terribly effective. 01:10 So, we tend to use injections and patches. 01:14 The use of testosterone patches has resulted in a significant reduction in male – elderly male depression as well, as it seems that testosterone seems to keep men happy for some reason. 01:27 In terms of toxicity, the worst of the issues is really cholestatic jaundice. 01:32 We see that actually quite a bit. 01:34 Transaminitis is going to be an issue and hepatocellular carcinoma is the most feared of the potential problems. 01:41 Now, in women, who are on testosterone therapy, we see some virilization. 01:46 We see hirsutism, which is increased facial hair; we see enlargement of the clitoris; and we see a deepening of the voice. 01:53 We also see in women menstrual irregularities, more aggression, and rare episodes of hypersexuality. 02:01 In terms of pregnant women, we will see virilization of the female fetus. 02:07 In males, we can sometimes get a paradoxical feminization of the patient, and that's because of feedback inhibition. 02:15 We started to see this first in weightlifters because they figured that – well, I'm taking a little bit of testosterone and that's helping me build muscle mass; if I take a lot, I'll probably get a lot of muscle mass if I take a lot, I'll probably get a lot of muscle mass and there they started growing breasts and looking more female. 02:33 And so, that – we've looked into these patients and tried to figure out why that happened and we discovered that excess testosterone, especially exogenous testosterone, seems to lead to feedback inhibition at the pituitary and hypothalamus. 02:49 Other androgens are often referred to as anabolic steroids. 02:53 The prototypical anabolic steroid is stanozolol. 02:59 In the lab, there was a high anabolic to androgen activity ratio. 03:05 In the real world, the androgen effects are actually still quite significant. 03:09 It results in small testicles, increased acne, and what’s commonly called roid rage which is very aggressive outbursts. 03:19 The tendons become quite weak and we're not sure if it's an enthesitis issue or an actual tendon issue, but we often see tendon rupture in these patients. 03:29 There's also an increased risk of necrotizing fasciitis, necrotizing angiitis and necrotizing myositis. 03:38 The necrotizing myositis has often been fatal in these weightlifting patients. 03:43 Let's move on to the antiandrogen class of agents. 03:47 We’ll start off with the receptor antagonists. 03:51 The best known of the antagonists is flutamide. 03:55 It is a competitive antagonist of androgen receptors and it's used most commonly in prostatic carcinoma. 04:02 These other ARBs – these other androgen receptor blockers are very well – very commonly used, but they're not necessarily going to be on your exam. 04:13 You should remember flutamide for your exam. 04:17 Now, spironolactone is also technically an antiandrogenic agent. 04:22 It is predominately a diuretic and we've already covered it in hypertension. 04:26 It blocks the androgen activity at the receptor level and it's actually surprisingly effective. 04:33 I have used this multiple times, hundreds of times, in female hirsutism. 04:38 My wife, who is a dermatologist, has used it thousands of times and it works very well. 04:44 Remember that pharmacologists love spironolactone and love ketoconazole, which was mentioned at other lectures. 04:51 It is always on exams. 04:54 Another class of antiandrogens are the 5α-alpha-reductase inhibitors. 05:00 5α-alpha-reductase inhibitors prevent the conversion of testosterone to dihydroxy-testosterone. 05:08 Finasteride is the classic and prototypical example. 05:12 It is sold as two different medications. 05:15 It’s sold in prostate disease as Proscar, and it’s sold in hair growth efforts as Propecia. 05:23 The DHT-sensitive tissues are hair follicles, prostatic tissue, and so these are the ones that are going to be affected. 05:31 Now, in Propecia, or in male pattern baldness, there's a significant reduction. 05:36 And in prostatic hypertrophy, there's also a significant reduction. 05:40 These are very, very effective agents. 05:43 They are the same drug whether you're taking Proscar or Propecia. 05:46 They’re just in different doses. 05:49 Now, the nice thing about the 5α-alpha-reductase inhibitors is that they are less likely to cause impotence, infertility and loss of libido because it's not really affecting the testosterone levels in the body. 06:03 Other agents are now coming out that have a longer life than finasteride. 06:08 For an exam purpose, remember finasteride because that's the prototypical drug and that's the drug that we’re going to use as an example of the class. 06:18 Let's move on to the antiandrogen class of drugs that are the synthesis inhibitors. 06:25 This is ketoconazole. 06:27 It is an antifungal drug, but it also inhibits gonadal and adrenal steroid synthesis. 06:34 Steroid response of metastatic prostate cancer is exceedingly and interestingly quite affected by ketoconazole. 06:42 Now, the reason why I keep putting ketoconazole on these slides is because pharmacologists love spironolactone and ketoconazole. 06:50 These drugs are always on exams. 06:52 I want you to know these drugs really, really well.

The lecture Androgens and Antiandrogens by Pravin Shukle, MD is from the course Reproductive Pharmacology. It contains the following chapters:

What is NOT a side effect of testosterone therapy?

What is NOT a side effect of testosterone therapy in women?

A 19-year-old male sports enthusiast presents to your psychiatry clinic with his family because of repeated outbursts of anger resulting in police involvement. On physical exam he is very well muscled with moderate acne on his face and back. What is highest on your differential?

Why is most testosterone not effective as an oral medication?

Author of lecture Androgens and Antiandrogens