Amyloidosis and Pheochromocytoma as Paraneoplastic Syndromes 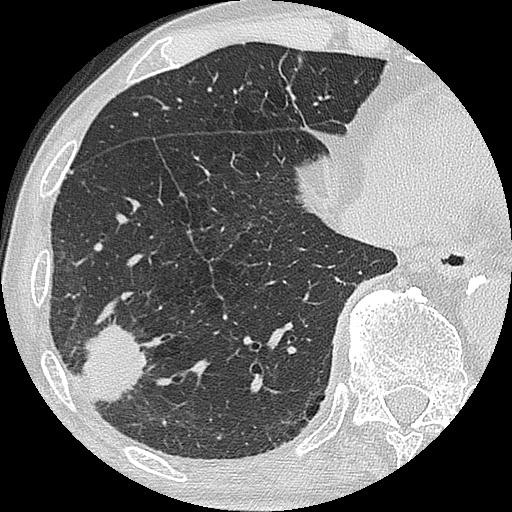 00:01 Another example of paraneoplastic syndrome is amyloidosis. 00:05 The deposition of amyloid proteins as a result of the elaboration of abnormal immunoglobulins, say in the setting of a plasmacytoma, or multiple myeloma. 00:18 What's going on here? So here's a marrow of a patient who has not a plasmacytoma, but has multiple myeloma. 00:26 So an increased number of abnormal, malignant plasma cells. 00:33 So these are the terminally differentiated cells, and they're cranking out a lot of a particular kind of antibody. 00:41 Too much of that antibody, and especially too much of the light chain of that antibody will result in the formation of amyloid deposition, extracellular deposition of amyloid fibrils. 00:53 Now, amyloid can be any of a variety of proteins. 00:57 And when we will, together talk about cardiac pathology at some point, I will talk about transthyretin-induced amyloidosis in the heart. 01:08 In this case, it's the light chains of the immunoglobulins being synthesized by the abnormal plasma cells and that is depositing in the extracellular matrix so it's outside of cells. 01:22 Right here, we're looking at the left atrium, and the left atrium has kind of a, almost a candle wax dripping appearance when we see it up close. 01:31 This is due to that profound deposition of that abnormal light chain protein, and it's now forming into fibrils that we recognize as amyloid. 01:40 What does that look like? Well, on a Congo red stain without putting polarized light on it, it looks like this, the individual cardiac myocytes are the lighter pinker cells kind of throughout and the more salmon-pink colored material around them represents the deposition in the extracellular space of amyloid protein. 02:02 This is the classic stain that we look for amyloid. 02:05 And when the appearance here for me is characteristic, but really what we're looking for, is we put polarized light on it, and we're looking for apple green birefringence. 02:16 So all the little green specks that you see in there represent amyloid deposition. 02:22 And in fact, on the boards when they ask, what's the diagnostic stain for amyloid deposition? You're going to see a Congo red stain and it's got apple green birefringence when I shine polarized light on it. 02:35 Finally, let's talk about hypertensive crisis. 02:38 So in a pheochromocytoma, again, potentially a benign tumor. 02:43 A pheochromocytoma's only 10% are malignant, 90% are not, but they will make catecholamines. 02:49 They will make epinephrine and that can cause a hypertensive crisis. 02:56 So what's going on here? This is an adrenal, on the left hand side, it's a pheochromocytoma In the middle, identified by the green circle, and in this particular case, it's a benign tumor. 03:08 It does not have any malignant potential. 03:12 At higher magnification, we can see what the cells look like. 03:15 They have rather large nucleus, they are a little bit pleomorphic. 03:18 They have prominent nucleoli, open chromatin pattern,and they have a very granular cytoplasm. 03:24 Well that granular cytoplasm is happily making lots and lots and lots of epinephrine. 03:29 Now in this pheochromocytoma, in that adrenal per se, there's not going to be much effect of the cancer but the release of epinephrine from these cells in this benign pheochromocytoma will cause bouts of elevated blood pressure. 03:47 And in fact, you can have a hemorrhagic stroke as a result of that. 03:50 You can raise the blood pressure into the 200 to 250 almost 300 millimeters of mercury level and that will rupture blood vessels and here we have just a hemorrhagic stroke that is due to a hypertensive crisis emergency and the patient died as a result of the hemorrhage due to the pheochromocytoma. 04:12 And with that we are at a concluding point but we're going to come back and talk about the way, other ways that tumors interact with their host.

The lecture Amyloidosis and Pheochromocytoma as Paraneoplastic Syndromes by Richard Mitchell, MD is from the course Cancer Morbidity and Mortality.

Which of the following stains is used to detect amyloidosis?

Which of the following can be a complication of pheochromocytoma?

Author of lecture Amyloidosis and Pheochromocytoma as Paraneoplastic Syndromes