Verbal and Nonverbal Communication – Self-Presentation and Interacting With Others (PSY,SOC) 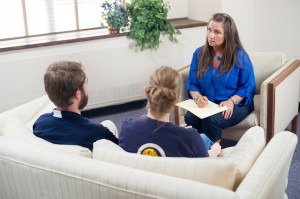 Self-presentation and Interacting With Others
Self -presentation is the method acquired by humans to present themselves in the society to control or shape how others think about them. It means expressing oneself and managing behavior in order to create a desired impression. Gender and culture have marked influence on self- presentation which have variable aspects. We will also look at impression management and self-presentation, including a reference to the dramaturgical perspective of the front stage and back stage self. This article will also cover verbal and non-verbal communication in humans, as well as the types of interactions and modes of communication that occur between animals.
read more
Load more
Share
Ask Questions
Take Notes
Download Slides
Report Mistake
Comments
show all Show less
My Notes
show all Show less
Learning Material 2
show all Show less
Report mistake
Transcript
0 of 0

The lecture Verbal and Nonverbal Communication – Self-Presentation and Interacting With Others (PSY,SOC) by Tarry Ahuja, PhD is from the course Social Interactions.

What can influence verbal communication?

Eye contact is one of the most important aspects of facial display in nonverbal communication. Which kind of message would depend on eye contact to be conveyed nonverbally?

What is the term for the messages that people deliver through movements, gestures, and their physical appearance?

Author of lecture Verbal and Nonverbal Communication – Self-Presentation and Interacting With Others (PSY,SOC)