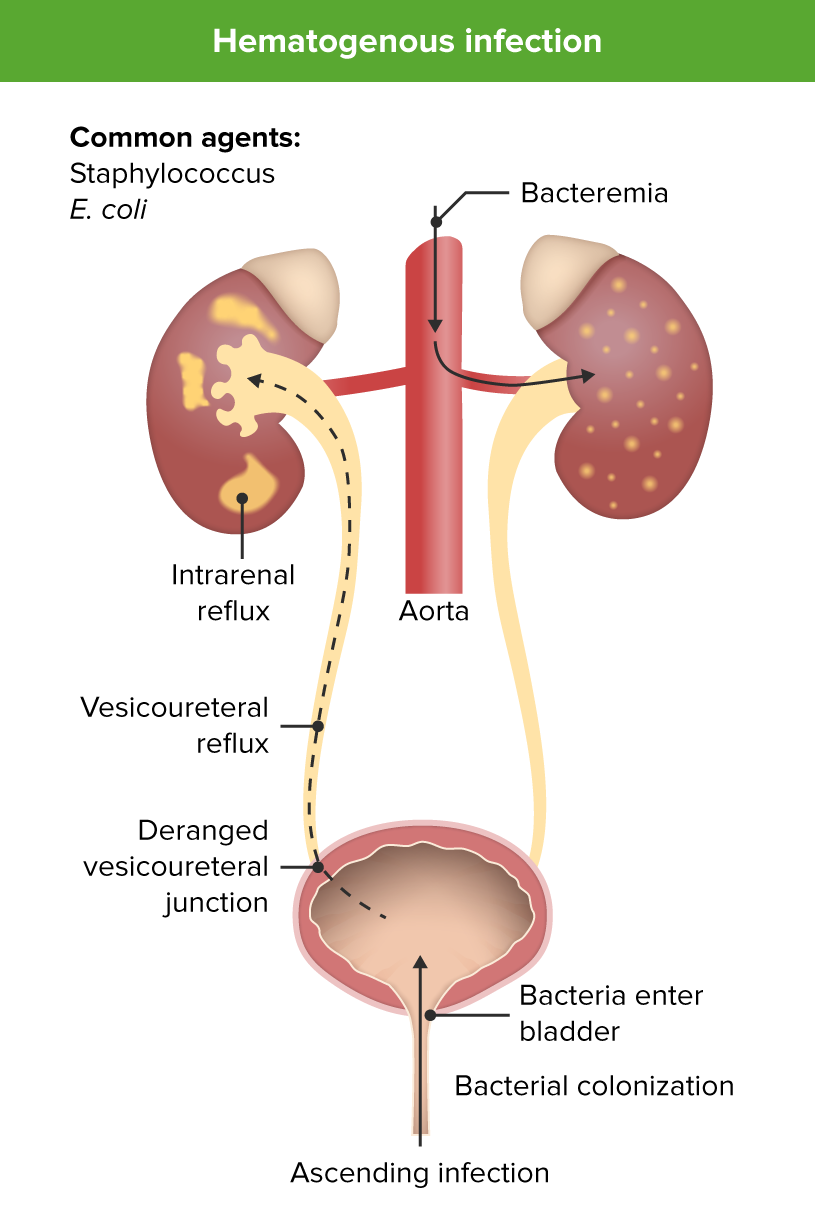 Urinary Tract Infections in Children
Urinary tract infections (UTIs) are commonly seen in children. Urinary tract infections may present as cystitis, pyelonephritis, or asymptomatic bacteriuria, and their clinical presentation may vary widely depending on the age of the patient. Fecal E. coli is the most common pathogen. Routes of infection may be ascending (most common) or hematogenous. Urinary tract infection is suspected based on lower UTI symptoms (dysuria, frequency) or upper UTI symptoms (fever) and positive urinalysis findings. Urine culture confirms the diagnosis. Most cases respond to oral antibiotics. Further investigation through imaging and, at times, hospital admission is required in refractory or recurrent cases.
read more 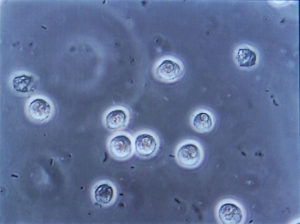 Urinary Tract Infection (UTI; Bladder Infection)
Urinary tract infections (UTI) are an inflammatory condition of an infectious etiology that involves the urinary tract. Anatomically, it can be divided into upper and lower urinary tract infections. Most common symptoms are fever, chills and rigor, foul smelling urine and other constitutional symptoms. Different risk factors include vesico-ureteric reflux, neurogenic bladder, calculi in the urinary tract, strictures and female gender. Culture and sensitivity testing is the gold standard for the diagnosis of a UTI. Antibiotics are the treatment of choice depending on the causative organisms, drug resistance, and pharmacokinetic of the drug.
read more
Load more
Share
Ask Questions
Take Notes
Download Slides
Report Mistake
Comments
show all Show less
My Notes
show all Show less
Learning Material 2
show all Show less
Report mistake
Transcript
0 of 0

00:01 All right. 00:02 Are you ready to talk about the dreaded urinary tract infection? We’re going to cover some epidemiology and some microbiology, but mostly discuss some pearls that, I think, will really help you in practice regarding diagnosis and management. 00:15 Let’s go. 00:17 So, in terms of epidemiology, definitely more females than males get urinary tract infections. 00:24 In fact, over a lifetime, about half of all women experience a urinary tract infection. 00:30 And of course, E. coli cause most cases of UTI, but certainly have to think about other less common organisms, Staph saprophyticus, Klebsiella, Enterobacter. 00:42 And the symptoms, I think you know, they're fairly classic, dysuria being the most common, frequency of urination. 00:49 And just those two symptoms alone, without any vaginal symptoms, such as vaginal discharge or burning, has a 90% positive predictive value in identifying urinary tract infections. 01:03 And this is something that I've actually learned that I didn’t necessarily know because I usually want patients to come in and get checked out. 01:10 But if a – particularly a female patient calls in and complains of dysuria, along with increased frequency, no vaginal symptoms, they actually did a study and found that only 5% of cases of urinalyses were negative in a study of telephone management. 01:26 So, these cases actually can be managed over the phone and might be a good indication to give antibiotics just right there on the spot to help treat the UTI. 01:35 Because physical examination is fairly limited for identifying urinary tract infection. 01:41 Classic is suprapubic tenderness to palpation, but only one in five women at most actually have significant suprapubic tenderness to palpation. 01:49 Always check for costovertebral angle tenderness because of the risk for ascending infection and pyelonephritis. 01:55 But I do think that one pearl I've learned in managing patients with suspected UTI is that there's a difference between costovertebral angle tenderness that’s mild where it’s like, yes, that kind of hurts. 02:08 If it’s pyelonephritis or a perinephric abscess or some more severe infection, touching that back, just even a gentle touch or a light touch like that, will really make the patient jump. It really hurts. 02:23 So, if it’s just a mild kind of soreness, that doesn’t necessarily qualify as costovertebral angle tenderness, because once I chart CVAT, I have to treat like I'm treating pyelonephritis, and that's different from most UTIs. 02:38 Patients, of course, get a urinalysis. 02:41 Urine culture isn't necessary for every case, and this may come up on your examination, but certainly for more complicated cases. 02:48 Recurrent UTIs, women who are pregnant, immunocompromised or immunocompromising conditions and diabetes, all those patients get routine cultures, but a healthy younger woman doesn't need routine culture. 03:04 And they found that, even with the classic symptoms present, that even as low as 100 colony-forming units per milliliter, can be suggestive and diagnostic for UTI among otherwise healthy patients. 03:18 Kind of remarkable. 03:19 Much lower threshold than there was in the past when it had to be 105 CFU per milliliter in order to diagnose UTI. 03:28 In terms of management, we reach to antibiotics. 03:30 And I can tell you there is not one that's perfect. 03:32 First line is still considered trimethoprim sulfamethoxazole or co-trimoxazole, but usually three days is acceptable. 03:43 Try to think about what your rates of resistance are when you're getting cultures back. 03:47 If your rates of resistance to TMP-SMX exceed 20%, in my practice, they probably see 30 to 40%, it’s probably better to reach for another drug. 04:00 The one I usually reach for, nitrofurantoin, it's an older drug, but associated with lower rate of resistance. 04:06 Unfortunately, multiple times per day dosing and you have to take it for five days, but generally well tolerated and more effective. 04:13 And then fosfomycin is also an option, and that's just one dose for a very convenient type of dosing schedule. 04:20 Second line agents include fluoroquinolones which are effective, but we are trying to practice stewardship and avoid overuse of fluoroquinolones and avoid the spread of fluoroquinolone resistance. 04:34 So, let’s talk about UTI in kids because this is an issue that comes up in practice, but also very much will come up on your examination. 04:41 So, first of all, abnormal urinalysis, so with white cells or nitrite, leukocyte esterase, plus at least 50,000 colony-forming units per milliliter. 04:52 Now, for kids, it's a special case. 04:55 You want to look for congenital abnormalities of the renal and bladder system. 05:00 So, therefore, doing an ultrasound on those organs is important even after a first UTI between 2 and 24 months of age. 05:08 However, what was also recommended in the past was avoiding cystourethrogram. 05:14 That's no longer recommended. 05:16 So, I think that might be the exam question you get is, what is indicated. 05:20 So, culture would be indicated. 05:21 Urinalysis would be indicated. Ultrasound would be indicated. 05:24 VCUG would not be indicated for first UTI in cases of between 2 and 24 months. 05:30 Second UTI, yes, it would be. 05:32 Checking for reflux. 05:34 So, in terms of management of UTI among young children, oral antibiotics are acceptable. 05:41 They don’t have to be put in the hospital. 05:43 Previously, everybody required parenteral antibiotics. 05:46 So, IV only if they're really sick, but it is a longer duration of treatment. 05:50 It’s between 7 to 14 days, depends on the practitioner. 05:53 But it’s not – no three or five-day options are available for children. 05:59 So, that's a brief overview of urinary tract infection. 06:02 A common diagnosis. 06:03 We may kind of take for granted, but hopefully you’ve gained a few pearls there in terms of clinical wisdom that it may be able to be manage on the phone in those classic cases. 06:14 You got some insight into antibiotics. 06:16 And particularly the workup in kids. 06:18 Those are all good things to know for your exam and for your clinical practice as well. 06:24 Thanks very much.

The lecture Urinary Tract Infection (UTI) by Charles Vega, MD is from the course Acute Care. It contains the following chapters:

A previously healthy 26-year-old woman sees you because of burning on urination and urinary frequency with small voids over the past 24 hours. She denies any vaginal discharge, itching, or pain. Which of the following is the most appropriate next step in management?

Which of the following is NOT required in the initial evaluation or management of a 14-month-old girl with a first episode urinary tract infection?

A voiding cystourethrogram (VCUG) in children primarily evaluates which of the following?

Which of the following patients with a clinical diagnosis of a lower urinary tract infection (UTI) is LEAST likely to benefit from a urine culture?