Nervous System: General Structure and Functions
The human nervous system weighs “only” about 4.5 pounds, which accounts for approximately 3% of the entire body. It is a small and complex body system that consists of an intricate network of nervous cells (or neurons) and even more glial cells. How many nervous cells does a human have? Billions, is the simple answer. However, from a medical point of view, the more important questions are: how does the nervous system work, and what does its structure look like?
read more 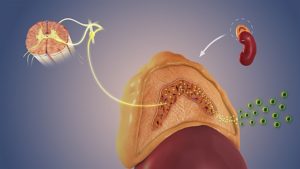 The lecture Nervous System: The Action Potential – Biological Bases of Behavior (PSY, BIO) by Tarry Ahuja, PhD is from the course Individual Influences on Behavior.

What is the resting membrane potential of neurons?

Which of the following would be responsible for maintaining the neuron's resting membrane potential?

What is the movement of ions during depolarization of a neuron called?

What is the movement of ions during repolarization of a neuron called?

How are electrical impulses propagated in a myelinated neuronal axon?

I love your lectures!! I'm studying the topic neurophysiology from the physiology subject (medicine), but it's everything much better explained here than just physiology. I understood everything perfectly!

I love your lectures!! I'm studying the topic neurophysiology from the physiology subject (medicine), but it's everything much better explained here than just physiology. I understood everything perfectly!