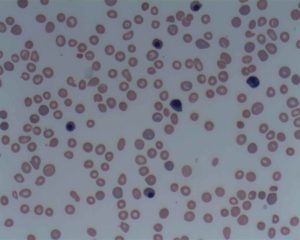 00:01 has been activated to start making hemoglobin. It has a factory now to make that hemoglobin. 00:02 Well the next stage is the polychromatophilic erythroblast shown here, notice the cell looks small there even through they can have a different range of diameters, ranging from 10 to 12 up to about 20. So there is a variation in their size, but have a look at the cytoplasm. It is sort of a liliac color. It is lighter and because the cell has now gone onto the stage where having got the factory to make hemoglobin and therefore basophilic, it actually manufactures the hemoglobin and hemoglobin being a protein takes up the eosinophilic stain. So you have a combination then of a bluish tinge representing the stain of the endoplasmic reticulum and you have the reddish eosinophilic type tinge related to the production and accumulation of hemoglobin. And therefore it looks a lilac type color. We call it polychromatophilic because polychromatic means many colors. The cell then passes to the stage where we call an orthochromatophilic erythroblast, commonly called a normoblast. Orthochromatophilic means there's only one color. And if you look at the cell, it has got essentially a reddish tinge around the cytoplasm. The nucleus is very very condensed now because the cell has now become a lot smaller, on its final destination to be a red blood cell only 6 to 8 microns in diameter. But note the colour of the cytoplasm. It is now more eosinophilic or reddish to do with accumulation of the protein hemoglobin. And here is a normoblast shown here where you cannot see the cytoplasm. It happens to be in another dimension, but that again is to stress the fact that these nuclei are very very condensed and that is a good way of recognizing these normoblasts or these orthochromatophilic erythroblasts in bone marrow. Finally, that nucleus is going to be extruded from the cell because as you recall the erythrocyte has no nucleus, it is just the package of hemoglobin. Well, it then goes through the stage of being a polychromatophilic erythrocyte again. And finally it goes on its final lineage differentiation to be a fully functional mature erythrocyte. And the reason why it is now referred to as a polychromatophilic erythrocyte or sometimes we refer this as being a reticulocyte, is because as the cell gets smaller, the cell still retains a little bit of the factory that synthesises hemoglobin. The cell has lost its nucleus, which is why we call it a reticulocyte, as opposed to a normoblast you saw earlier, but because it has got a lot smaller as I mentioned a moment ago, it has hemoglobin in it, which stains pink or reddish because it is a protein, but it also has still traces of the protein factory and therefore traces of the blue stain and that therefore gives the appearance of these cells as being polychromatic or a lilac colour. And finally that erythrocyte is now fully mature and is released into the circulation. It is nice and rounded. It has got a biconcave disc shape and now it is full of hemoglobin. So, in summary then, it is important that you appreciate the lineage that I have described, but the main real point I think to understand is that you are going to end up with a cell that is full of hemoglobin, the protein. You start with a progenitor cell that has to then create lineages that first of all develop a factory to make the hemoglobin, the endoplasmic reticulum that stains very strongly basophilic. 05:00 And then as the cell moves through the process of making hemoglobin then there is a combination of coloration you see in the cytoplasm. And then finally as you get more or more hemoglobin produced, then the cell becomes more pink stained. So remember the destination of the cell, remember the process involved and I think it helps you to think about the sort of staining that you see in this lineage. It is very hard to identify these cell types in bone marrow, particularly using some stains that just do not happen to work as good as we would like, but what I hope I have given here is some demonstration at least of the lineage giving rise to the erythrocyte from the proerythroblast. 05:55 Let us look at thrombopoiesis or the formation of the platelet. Here is a huge cell.

The lecture Stages of Erythropoiesis by Geoffrey Meyer, PhD is from the course Bone Marrow.

The CORRECT sequence of the stages of erythropoiesis is...?

At what stage in erythropoiesis does the hemoglobin production initiate?

Which of the following is the CORRECT biochemical composition of hemoglobin?

Author of lecture Stages of Erythropoiesis