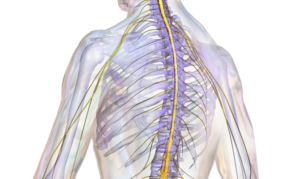 Spinal Cord: Spinal Nerves, Cervical Plexus, Brachial Plexus & Gray and White Matter
While the brain and the spinal cord make up the Central Nervous System (CNS), the Peripheral Nervous System (PNS) is comprised mainly of nerve fibers and ganglion cells. The two systems cannot be clearly distinguished from one another as they are functionally closely interlinked. The PNS conducts information from the CNS, via numerous nerve fibers, to the effector organs and vice versa. The cranial and spinal nerves belong to the PNS. In this article, we address the spinal nerves and the nerve plexuses that supply the extremities, namely the cervical and brachial plexus.
read more
Load more
Share
Ask Questions
Take Notes
Download Slides
Report Mistake
Comments
show all Show less
My Notes
show all Show less
Learning Material 2
show all Show less
Report mistake
Transcript
0 of 0

00:03 Well, I mentioned earlier that we are going to look at the location of both motor neurons and also sensory neurons in the spinal cord. So let us move on and try and understand now the structure of the spinal cord. Here is a section on the left-hand side taken through the spinal cor. And immediately you see that there are two different stain components. 00:31 One called the gray matter is shaped a bit like the letter H or it is bit like a butterfly. 00:39 From the outside of that butterfly, there is a darker stain and darker blue stained component we call the white matter. So the spinal cord consists of two major components, gray matter, and white matter. And it is important to understand the difference between the two and it seems a bit silly saying it gray and white matter where in fact they are blue in this section, but that basis, that naming is because if you section through a spinal cord in fresh tissue, then it appears white and gray because the gray part, the butterfly shape within the spinal cord is where all the cell bodies are located of neurons, interneurons and also the ventral horn or motor neurons. Remember the sensory neuron cell bodies are not located in the spinal cord. And the reason why it looks gray relative to the outer white region is because the white matter consists of all the axonal processes and some dendritic branches as well. And those axons are myelinated. They are surrounded by fatty tissue myelin that I will talk about later on. So it looks white, fatty white material compared to the less myelinated region in the center of the spinal cord, the butterfly. 02:12 So that is where it get its name white matter and gray matter. And of course if you stain the spinal cord as we will see in subsequent slides, you will see that this white and gray matter are often blue, brown depending on the stain used. But the first thing you should understand now is that the internal butterfly shape is the gray matter and the outside area is called the white matter. If you look very very carefully down in the bottom of the section where I have labelled the ventral horn, this is where the somatic motor neurons live. If you look very carefully at this low magnification picture, you might be able to see some little bluey spots. They are the ventral horn cells, the motor neurons you see on the right-hand section in higher magnification. Again they have a rather pale nucleus with a prominent nucleolus, which was labelled in the previous description a few slides back and look also at the appearance of the soma. Remember that dark clumped stained material is nissil substance. Well, you can see the term there dorsal horn and ventral horn. 03:41 They are referred to the wings of the butterfly, if you like. Dorsal means the posterior part of the spinal cord, ventral is the anterior or front part of the spinal cord. And they house two different components, two different sorts of neurons. And it is very important for you to understand what neurons are housed in these different areas. The dorsal horn is where the fibres, the axons from sensory neurons enter into the spinal cord. 04:18 The cell body is located at some distance away in ganglia. But when those axons receive information from the periphery and it travels all the way up into the ganglion cell, it is then transported and enters the spinal cord through these dorsal horn. Whereas the ventral horn houses cell bodies of somatic motor neurons. Those that are going to innervate skeletal muscles. 04:50 Those that we are consciously aware of. And it is very important you know the differences of the dorsal horn and the ventral horn and the sorts of neurons that you find there. Of course if you look under very high power, then you will see cell bodies of other neurons in both of those regions and they of course, will be the intercalated or interneurons that we described earlier. 05:20 Well, if you look at some parts of the spinal cord as well, you can just make out a very small lateral horn. The lateral horn is a part of the spinal cord, a part of the gray matter that houses the cell bodies of the visceral motor neurons, those ones that are going to innervate smooth muscle. Those that are going to innervate components in the body that we are not really aware of. These visceral motor neurons are part of the autonomic nervous system and I will refer again to them later on. They are housed in the lateral horn. So just have a look at this image on the left hand side. Look where the lateral horn is located and just test yourself whether you have remembered what sort of neurons are associated with the dorsal horn and what sort of neurons are associated with the ventral horn. As I said it is very very important that we remember that because it is going to be very important later on. 06:29 And on the right hand side you can see again a very high magnification picture of one of these visceral motor neurons, they are not as big as the large ventral horns cells we saw earlier. And just to the right of that cell, you can see some little dark stained blue areas. They are the axons, they are the myelinated axons of the white matter and we will describe that in more detail later on.

The lecture Spinal Cord by Geoffrey Meyer, PhD is from the course Nerve Tissue.

Which of the following most accurately describes the lateral horn of the spinal cord?