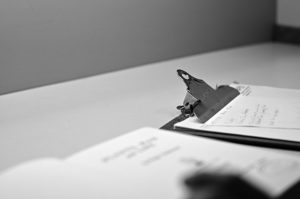 00:00 So, the first thing that we're going to compute is this thing called sensitivity, how sensitive is the test to detecting if you have a truly diseased case. It's a probability of correctly diagnosing a case, remember a case is somebody with a disease; we sometimes call this the positive fraction. On the other hand, specificity is a probability of correctly rejecting a case, in other words, if you don't have a disease, will the test truly find that you don't have a disease, we call this the negative fraction. So again, if a patient really is diseased, the sensitivity tells us the probability that the test will show that they are really diseased and if the patient really isn't diseased, the specificity tells us the probability of the test will be negative and it will show that they're not diseased. Which one do we care about more? Remember a really high sensitivity tells us that the test is throwing a wide blanket, it's open to anyone, it's really likely it's going to find a positive case, but it is also really likely that it's going to find a lot of negative cases and think they're positives, we call those false positives. Now when we set up a contingency table to analyze and to compute the important indicators of a sensitivity test, that table must be set up exactly the way that I'm showing you, otherwise the formulas that I'm talking about won’t apply. So at the horizontal axis, we want the screening test results with a positive case on top and the negative on the bottom. On the vertical axis, we're going to have our measurements of truth, again truth is the result of the additional test, the ultrasound, biopsy, etc. And the first column are those who test positive on the truth test and the second column is those who test negative on the truth test, in other words those are truly diseased and those who are truly not diseased. In other words, our screening test is set up in such a way that we're going to test which ones are true positives and false positives and so forth. Now let's calculate sensitivity, what is sensitivity again? Sensitivity is going to be the number of people who test positive on my screening test who are also truly positive, we call that A. And we're going to divide that by the total number of people who are truly positive. In other words, the proportion of truly diseased people who test positive, A over A + C. How do I calculate specificity, similarly, I figure out the number of people who are truly negative, as in truly non-diseased, B + D and I count the number of people who test negative on my test, that proportion is going to be my specificity. So the probability of correctly diagnosing case is sensitivity, the probability of correctly rejecting case, i.e. finding that someone doesn't have disease and it's true, they don't have a disease, that's specificity. How do I compute prevalence from a contingency table? Well prevalence is always going be the total number of actual cases, that's going to be A + C divided by my entire sample, so A + C divided by everyone else, that's prevalence.

To evaluate the performance of a new diagnostic test, it is piloted on 100 known cases of the disease, and on 200 controls known to be free of the disease. Ninety of the cases yield positive tests, as do 30 of the controls. Based on these data, the specificity is which of the following?