Segregation of Chromosomes with Inversions 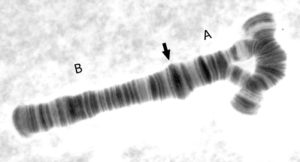 00:01 The next situation, so we’ve dealt with our deletions and we’ve dealt with our translocations. 00:09 The other condition was that we could have an inversion where a whole segment of a chromosome has inverted. It still has the full complement of genetic information. However, that genetic information has been turned on its head. It could end up being expressed perfectly fine and have no problems except if the breakpoints happened to interrupt a particular gene. Segregation of inversions generally ends up being just fine. However, if there is crossing over within that inversion loop as we’ll see in this image, so here we have the first set of chromosomes. On the left of the inversion, we see A, B, C, D and instead of A, C, B, D, that’s been flipped. In order to pair these chromosomes, during meiosis need to form a loop. Now, when they form a loop and segregate, everything is fine unless there’s a crossing over event inside that loop. If the crossing over event happens to be a paracentric inversion then we end up with one outcome versus a pericentric, so paracentric, next to the centromere versus pericentric, around the centromere, right? Let’s say this crossing over event happens in a paracentric inversion, we will have some balanced chromosomes result. 01:50 As we’ve already explored, balanced chromosomes can often end up with no phenotypic expression except for perhaps where the break was. But most often, the break isn’t actually going to be within a gene. 02:04 However, with the crossing over event inside the loop, we will probably develop some inviable gametes because the chromosomes in them, you can see here the inviable ones. The first one we see has two centromeres shown in green. The second one has no centromeres at all. That’s what makes them inviable. 02:31 If the crossing over event happens within the loop, then we end up with 50% viable gametes and 50% inviable gametes. It ends up looking as if there is no issue. We wouldn’t even know the crossover event happened, right? Let’s say though the inversion happens in a pericentric manner, meaning around the centromere and that crossing over happens in that loop. If crossing over happens to happen in that loop, then we will see some balanced gametes come out and some unbalanced gametes. 03:11 In which case, we’ll have a genetic anomaly arise because of the unbalanced gametes. 03:17 The balanced gametes will generally produce offspring that is just fine. You would have to do some genetic analysis to find out that there was even a problem, whereas the unbalanced gametes are likely to produce some phenotypic effects even if the fetus perhaps does make it to term. 03:39 So, Inversions again can end up with some complicated situations but generally not so much.

The lecture Segregation of Chromosomes with Inversions by Georgina Cornwall, PhD is from the course Chromosomal Disorders.

Which of the following about paracentric inversions is TRUE ?

Which of the following inversions is most likely to result in phenotypically affected offspring?

Author of lecture Segregation of Chromosomes with Inversions