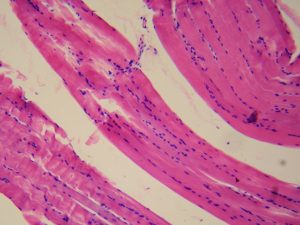 The Different Types of Muscle Tissue and Their Mode of Action
Muscles are the active part of our motor system. They are the focal point of our weekly efforts at the gym. They define our body significantly and are therefore a characteristic of attractiveness. However, even more important is their function. Movements are the results of alternating contraction and relaxation of muscles that amount to approximately 30-40 % of the entire body weight. The primary function of muscles is the conversion of chemical energy into mechanical energy to do their work. Without the support of muscles, we would not be able to keep our back straight, let alone walk straight. In this article you will find a compact overview of the different types of muscles, their structure, how to control movement with their origin and approach and which auxiliary structures they use.
read more
Load more
Share
Ask Questions
Take Notes
Download Slides
Report Mistake
Comments
show all Show less
My Notes
show all Show less
Learning Material 2
show all Show less
Report mistake
Transcript
0 of 0

The lecture Sarcomere by Geoffrey Meyer, PhD is from the course Muscle Tissue.

What is a sarcomere?

Which of the following components of the myofibril does NOT shrink in size during muscle contraction?

Which of the following regarding terminal cisterna is INCORRECT?

Which of the following statements is NOT correct regarding the skeletal muscles?