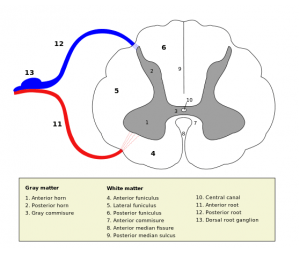 Anatomy and Structure of the Spinal Cord and Spinal Cord Injuries
The spinal cord (medulla spinalis) is part of the central nervous system, while simultaneously connecting the body to the brain. On the posterior side of the spinal cord, sensory information from the skin, skeletal musculature, joints and intestines, flows in from the afferent nerves via the dorsal root of the spinal nerves. On the frontal side, in turn, spinal nerve roots exit as efferences and deliver information to the peripheral nervous system – to the skeletal musculature and the intestines, and so forth. The following article will provide you with a first impression of the structure and function of this fascinating organ.
read more
Load more
Share
Ask Questions
Take Notes
Download Slides
Report Mistake
Comments
show all Show less
My Notes
show all Show less
Learning Material 2
show all Show less
Report mistake
Transcript
0 of 0

00:01 Now, I want you to understand the fact that the gray matter is divided into finer divisions. We looked at dorsal, ventral, and intermediate horns. But the gray matter is divided into divisions that are referred to as Rexed laminae. These are going to number I through X. I will be located most dorsally. IX is located out here ventrally. Then X is going to be in an area of decussation of axons. Now, I want you to understand some of the basic functions that are associated with these Rexed laminae. First, we’re going to bundle Rexed laminae I through IV together. You can see where they’re located within the dorsal gray horn or dorsal horn. These are responsible for exteroceptive sensations. Here you’re receiving information from the periphery of the body as it might relate to fine touch, temperature, vibration, or pressure. 01:12 Rexed laminae V and VI shown here and here are responsible for proprioceptive sensation. These also serve as a relay between the midbrain and the cerebellum. Rexed lamina number VI also will have some neurons that will give rise to the spinocerebellar pathways. This will be ascending in nature. Number VII shown in through here would only be found where you have visceral motor output, sympathetic motor output. So you’re looking at this particular lamina being found in spinal cord segments T1 through T12, L1, L2 and perhaps L3. VIII and IX are shown here and here. These Rexed laminae are responsible for final motor output to the periphery. Then lastly, between the right and left gray horns, you have this more centrally located area where you have a decussation of axons between the right and left sides. 02:28 If we highlight specifically Rexed lamina number IX, again this is coordinating final motor output along with VIII but in Rexed lamina number IX, there is a topographic organization by motor function. 02:47 Here you’re going to find alpha and gamma motor neurons. There are two rules for you to remember about this topographic organization by function. One is the proximal to distal rule. What we have here in the upper limb within Rexed lamina number IX, the more proximal musculature of the upper limb is found medially. The distal musculature of the upper limb is found more laterally. The proximal to distal rule is topographic organization is then medial to lateral. There’s also a flexor extensor rule regarding this topographic organization. That is the flexors, in this case the upper limb are oriented more posteriorly within the Rexed lamina number IX, whereas extensor muscles become arranged so that they are more anteriorly located within this Rexed lamina. Now, I want you to understand that the spinal cord tracts are going to be involved in transmitting or conveying functional information. This functional information can be ascending, going from the spinal cord upwards to higher brain centers such as the cerebral cortex. You can have functional information being conveyed in a descending manner coming from the cerebral cortex, for example, down to the level of the spinal cord. Highlighted in blue are various ascending pathways or tracts. An example here would be the lateral spinothalamic tract shown in through here. You’d also have, yet as another example, the anterior spinothalamic tract. These are conveying sensory information from the cord level which is receiving information from the periphery and then sending that up to the cerebral cortex so that it may be perceived. The other type of functional transmission is going to be descending in nature and this is conveying motor information. Some of the examples here are shown in red. This would be your lateral corticospinal tract, for example, here. 05:24 Then this one arranged here would be your anterior corticospinal tract. So you want to be able to use these tracts to innervate your peripheral skeletal musculature.

The lecture Rexed Laminae and Spinal Cord Tracts by Craig Canby, PhD is from the course Spinal Cord. It contains the following chapters:

Which of the following statements regarding the distribution of rexed laminae in gray matter is INCORRECT?

Which of the following combinations of the Rexed Laminae does NOT match with their corresponding functions?

Which of the following statements best describes the Rexed Laminae IX?

Rexed Laminae VII is located in which of the following parts of the spinal cord?

The lecturer made the laminae look simple and memorable and definitely gotta be watched by peers since it gives a simple breaking down of presentation that makes it more easier to store it up.

The lecturer made the laminae look simple and memorable and definitely gotta be watched by peers since it gives a simple breaking down of presentation that makes it more easier to store it up.