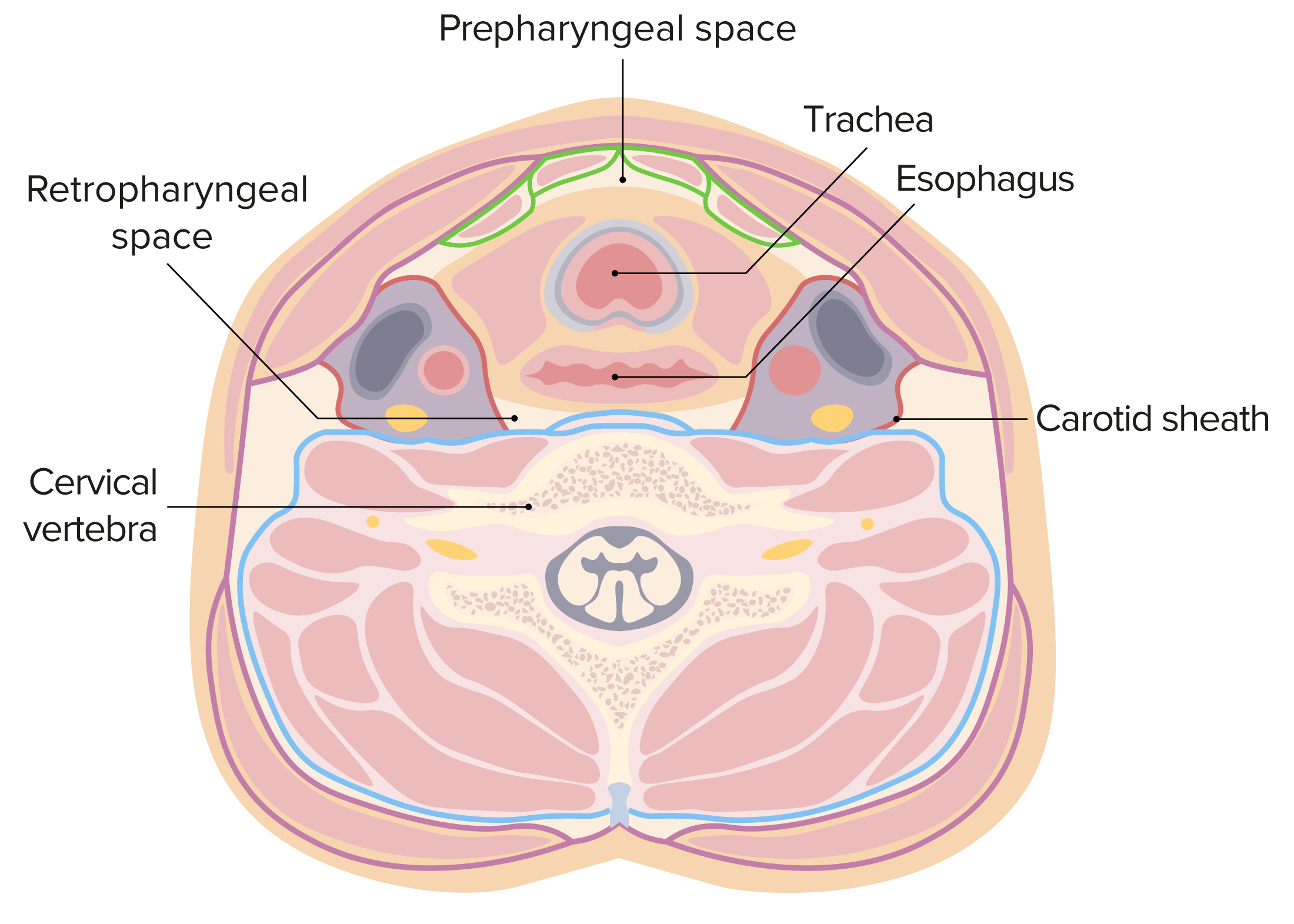 Retropharyngeal Abscess
Retropharyngeal abscesses occur in the retropharyngeal space, which extends from the base of the skull to the posterior mediastinum. The abscesses occur due to extension of local infections, including upper respiratory infections or localized infections from trauma such as dental procedures. Infections most commonly occur in children. Key clinical features include trismus, dysphagia, and an inability to extend the neck. Diagnosis is confirmed by computed tomography of the neck. Management is primarily through antibiotics and surgical drainage. Complications include airway compromise, mediastinitis, and internal jugular vein thrombosis.
read more
Load more
Share
Ask Questions
Take Notes
Download Slides
Report Mistake
Comments
show all Show less
My Notes
show all Show less
Learning Material 2
show all Show less
Report mistake
Transcript
0 of 0

00:00 Let's switch next to an even deeper upper airway infection and we'll talk now about the Retropharyngeal Abscess. This is an infection of the soft tissue of the neck in the retropharynx, That area that's just in front or anterior to the cervical spine. This starts off as a cellulitis and then can progress to a frank abscess that requires drainage. Just like in a peritonsillar abscess, this is a microbial process, a polymicrobial process and involves those same bacteria specifically <i>Streptococcal</i> species, <i>Staph aureus</i>, <i>Anaerobes</i> and <i>H. flu</i> typically <i>H. flu</i> non-typable. So these patients will present typically with difficulty swallowing. They'll say "it's hard to swallow and it hurts when I swallow." They may have so much difficulty with swallowing that they frankly drool because they don't want to swallow their own saliva. In this case, they will be unwilling to move their neck and in particular they will be unwilling to look up. I want to pause right here and remind you of difficulty in patients who are not wanting to move things and have fever. 01:18 So, the peritonsillar abscess, they don't want to open their mouth; the retropharyngeal abscess, they don't want to look up; in meningitis, they don't want to look down. They don't want to look up because as you can see in this picture they have inflammation in front of the cervical vertebrae. If they look up, they're stretching that tissue and that tissue when it's stretched hurts. You may well see patients have a change in vocal quality. We see that a lot in croup or in older patients with laryngitis. The laryngeal area may be involved and that can change their vocal quality but generally that's not the case. They may have unwillingness to move to the side if some of the infection has spread laterally and is now involving stretching if they look in 1 direction or the other. Patients will typically have snoring or stridor and they may develop respiratory distress if it gets very severe. You may be able to notice some neck swelling along the side of the neck, a mass such as a big phlegmon or even just a bunch of matted lymph nodes like lymphadenopathy. Patients will have trismus only in peritonsillar involvement they typically do not in retropharyngeal involvement. Very rarely this can extend downward and they can develop chest pain. When you check labs, they're generally unhelpful. A white count is usually high but can completely be normal and so we shouldn't rely on a white count to make this diagnosis. 02:55 Likewise, while some recommend blood culture, it's virtually never helpful. So I do not recommend blood culture. In an exam on a febrile child with throat pain and inability to look up is this diagnosis until proven otherwise and, like I said, limitation in lateral movement implies that it might extend laterally. So how do you diagnose it? Well, imaging is key. So in this case what we'll do is we'll get a lateral neck film. Here you can see a patient with a pretty impressive retropharyngeal abscess. The space between the cervical vertebrae and the open pharynx should be less than half the width of 1 vertebrae. In this patient, it's more than the width of an entire vertebrae, this patient definitely has a problem. Keep in mind if a patient is breathing out, you can have a false positive. So you want to check with your radiologist that the technique of the film was good. This can also happen if they're not extending their neck but they have their neck down and remember they don't want to extend their neck, that hurts. A neck CT is done in patients where we suspect a problem. We almost always do a neck CT in patients where they're going to the operating room where we're going to drain this. The reason we need that CT is because we need to understand exactly where the problem is, what parts we need to drain, how best to approach the abscess. It would be nice to do an MRI but in this case we typically don't. That's because the airway is tenuous. These patients don't have a great airway and most of them to hold still would need to be sedated and sedation is dangerous in a limited airway. 04:42 So how do we manage this? Well, first we need to give antibiotics especially if they're not yet ready to be drained and we'll give them ampicillin or sulbactam. Occasionally that's all they need and they get better. In which case we transition them to amoxicillin/clavulanic acid and send them on their way. If they're allergic, we might use clindamycin and if we suspect MRSA we might use clindamycin or if they're severely ill we may use broad-spectrum antibiotics like vancomycin and ceftriaxone. There is alternative clindamycin. Think about allergic patients and think about if we're suspecting MRSA. In terms of steroids, they're indicated but only if there's an acute airway obstruction. Steroids are not useful if there's no airway obstruction. 05:28 They don't seem to affect the course of illness and we like to avoid steroids in patients with bacterial illness because we don't want to blunt the immune system response. What's key is if it's growing and it's not getting better on the antibiotics, this needs to be drained. If it looks like a frank abscess, the ear, nose, and throat doctors may just decide to drain it empirically right off the bat. Don't forget, if you're going to get that drained it's wise to culture because sometimes they don't respond to the antibiotics you have and it's really helpful to figure out what that bacteria is and remember that blood culture is very unlikely to be positive.

The lecture Infections of the Upper Pediatric Airway: Retropharyngeal Abscess by Brian Alverson, MD is from the course Pediatric Infectious Diseases. It contains the following chapters:

Which of the following physical findings is most consistent with a retropharyngeal abscess?

Which of the following is a typically absent finding in retropharyngeal abscess?

Normally on a lateral neck film, the space between the cervical vertebrae and the open pharynx will be less than...?

Which of the following is NOT a common treatment choice in a patient with retropharyngeal abscess?

Which of the following statements is FALSE regarding retropharyngeal abscess?

(1) 5,0 of 5 stars
Excellent lecture
By Jalil Z. on 28. July 2020 for Infections of the Upper Pediatric Airway: Retropharyngeal Abscess

Excellent lecture, I particularly liked the recommandation to avoid labs and blood cultures, a good reminder in a "less is more" approach.

(1) 5,0 of 5 stars
Excellent lecture
By Jalil Z. on 28. July 2020 for Infections of the Upper Pediatric Airway: Retropharyngeal Abscess

Excellent lecture, I particularly liked the recommandation to avoid labs and blood cultures, a good reminder in a "less is more" approach.