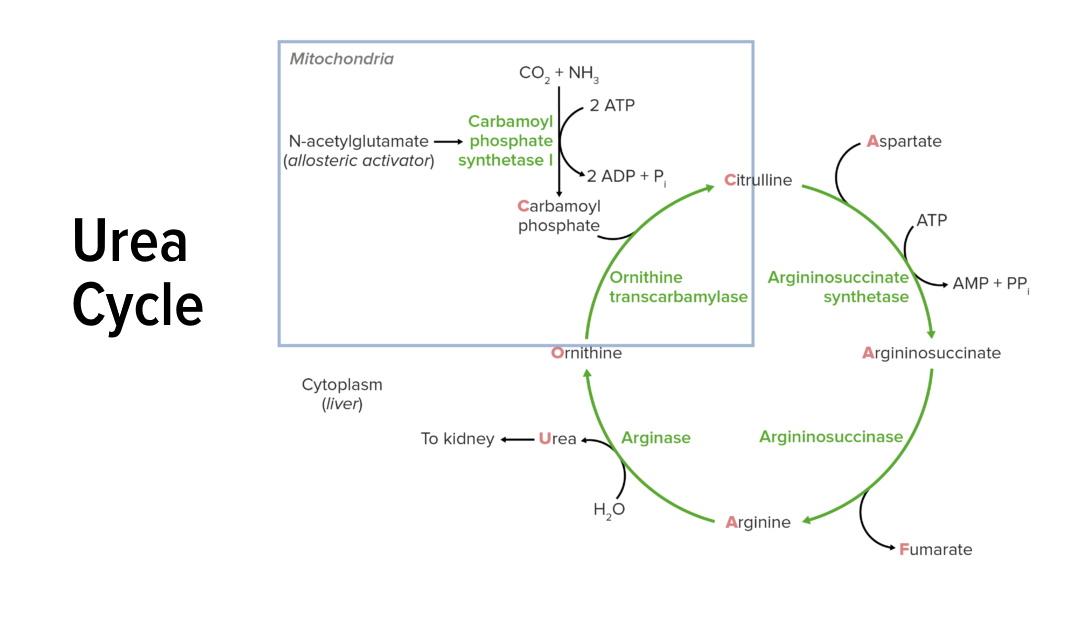 00:02 Nitrogen as I said earlier in this lecture is problematic when it’s converted into forms that are very, very reactive. 00:09 Those reactive forms of nitrogen are known as reactive nitrogen species and they’re kind of paired with reactive oxygen species. 00:16 In either case, we have typically molecules that can readily form radicals. 00:21 And as a result of the formation of those radicals, it can rapidly combine undesirably with other molecules in the body. 00:28 Now, this slide shows the production and reactions of several reactive nitrogen species. 00:34 I’m not going to go through all of them, but I’m going to point out the highlights and the important parts of each one for consideration. 00:42 In the synthesis of nitric oxide, for example, nitric oxide actually is a radical. 00:48 And so, our body is actually making this for one purpose, but the down side of the nitric oxide, it can combine with other things. 00:54 That’s the NO that we see in reaction one. 00:57 Nitric oxide can combine with other molecules such as the NO2 shown here at the nitrous compound. 01:04 Combining these two molecules together creates dinitrogen trioxide, N2O3. 01:10 That molecule is very reactive. 01:11 You see it can combine there with thiols to make this RS as the S part being the thiol part and the NO being the nitrous oxide part. 01:21 N2O3 is very active in the process of nitrosation. 01:25 That is adding a nitrate to something else. 01:28 And that is a very big problem associated with these reactive nitrogen compounds. 01:33 We see in the figure on the right some of that nitrosation happening. 01:38 Now, nitrosation can cause problems, because if the nitrate, for example, adds to an animo acid, the nitrate is negatively charged and will change the properties of protein that it gets linked to. 01:51 Well, changing properties of proteins is not very good. 01:54 We recalled it, for example, phosphorylation change a signaling molecule into a non-signaling molecule or a non-signaling molecule into a signaling molecule. 02:03 When cells lose control of their protein in this way, major problems can result. 02:08 In the third reaction, nitroxide combines with another reactive molecule called “superoxide” to make a very reactive molecule known as peroxynitrite. 02:19 We see the arrow indicating peroxynitric and participate in oxidation. 02:22 And we’ll see in the next slide, peroxynitrite can combine with several things to cause major problems in the cell. 02:29 The other reactions that are shown in the very bottom involve manipulations of iron involving reactive nitrogen species, converting iron from +2 to +3 or +3 to plus +2. 02:40 Each of those can create problems and create themselves reactive oxygen species where not desired. 02:46 Now, the most potent reactive nitrogen species that I’ve shown above is peroxynitrite. 02:51 So let’s talk a little bit more about it on the next slide. 02:56 Peroxynitrite is formed, as I said, from nitric oxide in superoxide. 03:00 And you can see the reaction a little better here. 03:03 The peroxynitrite ion that’s made can readily react with DNA and with proteins causing damage. 03:10 We know that reacting with DNA is going to result in mutation. 03:14 And we know that reactive with protein is going to cause damage to the protein and may change the function of the protein as well. 03:22 The part of the protein that most commonly gets oxidized by peroxynitrite is the side chains of cysteine. 03:29 Cysteine, you recall, has hydro groups, sulfur. 03:33 These are very reactive particularly with peroxynitrite. 03:36 Another amino acid to which peroxynitrite can react is that of tyrosine side chains. 03:42 Now, you remember from the discussion of signaling in another one of these lectures, that tyrosine side chains are very important phosphorylation targets in the process of signaling. 03:51 If those side chains are altered, we may very well result in alteration of signaling processes and signaling process alterations can lead to cancer. 04:00 Peroxynitrite can also react with transition metal such as the iron, in hemoglobin, myoglobin, and cytochrome. 04:06 And we know the importance of all those molecules in the carrying of oxygen and in the electron transfer process. 04:13 Well, the three reactions on the right part of the screen show some of the other types of reactions that peroxynitrite can be involved in. 04:20 I’m not going to go through them. 04:21 But I will point out that every place in those reactions, where you see a molecule produced that has a single dot beside it, it’s a radical and radicals can be combined with other biochemicals at random causing problems. 04:37 So we see the peroxynitrite can, in fact, create enormous problems for cells and increase the number of reactive molecules every time they react significantly. 04:47 Well, this reaction in these lectures, I’ve gone through the ways in which the ammonium and the amines produced by amino acid catabolism are handled by the body and used to create urea for excretion. 05:02 I’ve also talked about the reactive nitrogen species that can be created as a result of nitric oxide in other types of nitrogen compounds. 05:11 The results of these are very hazardous for the human body.

The lecture Reactive Nitrogen Species by Kevin Ahern, PhD is from the course Amino Acid Metabolism.

Which of the following is true with respect to reactive nitrogen species?

The DNA molecules mutate when they react with which of the following?

Which of the following molecules are affected severely by the attack of peroxynitrite?