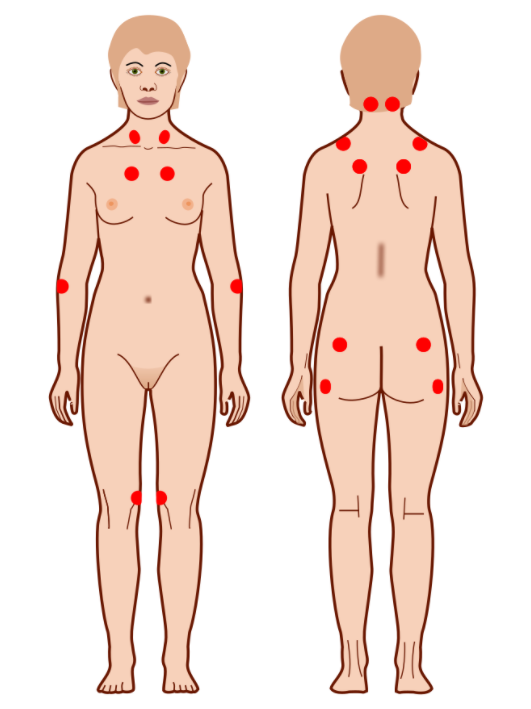 00:00 Okay, now let's do a few quick questions. I'll ask the question, feel free to pause the screen before going on to see what the answer is. All of the following are characteristic features of fibromyalgia except: Number 1, fibromyalgia is a more diffuse chronic form of myofascial pain syndrome. That's correct. Number 2, most common in young women. That's also true. Number 3, it is a diagnosis of exclusion. That's also true. 4, it is commonly associated with sleep and mood disorders. That's also true. There's only one left. The mechanism involves lymphocytic infiltration of cutaneous pain receptors. We know that's not true. As I said, if you were to perform a biopsy of a muscle or a nerve in the area where patient is reporting pain, you're not going to find anything unusual in that area because it's a centralized pain problem, not a nociceptive problem. Another question. Treatment of fibromyalgia might include all of the following except: Okay, pregabalin, again the gabapentinoids definitely have been shown to be effective. NSAIDs, interesting. Non-steroidal anti-inflammatory drug. As we said in the beginning, this is a non-inflammatory condition. So while our instincts as providers maybe to prescribe ibuprofen or diclofenac to a variety of patients with pain complaints, this is one of those examples where NSAIDs really aren't going to be effective since there's no inflammation that you're treating in fibromyalgia. Other things that we know do work, sleep hygiene, CBT, and patient education. So the answer to this question is NSAIDs because they are not a treatment for fibromyalgia. 01:53 And with that, I think we're done.

Which of the following should NOT be part of a treatment regimen for fibromyalgia?