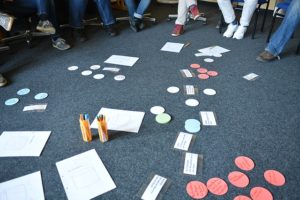 The lecture Deviance – Normative and Non-normative Behavior (SOC) by Tarry Ahuja, PhD is from the course Social Processes That Influence Human Behavior.

Which theory states that behavior that violates society's expectations is actually caused by an individual who is regarded as being odd or whose behavior is considered criminal or dangerous?

Which theory states that failing to follow society's established expectations is caused by the disparity between society's goals and legitimate means by which to achieve them?