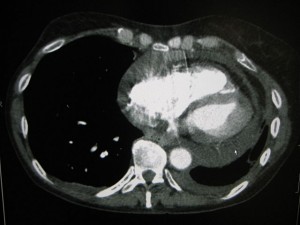 Pericardial Effusion And Cardiac Tamponade — Symptoms and ECG
Pericardial effusion is the condition of having an abnormal amount of fluid in the pericardial cavity of the heart. The pericardium does not expand. If enough fluid accumulates it will restrict cardiac filling and lead to acute heart failure, this is called cardiac tamponade. Small effusions are usually asymptomatic. Symptoms of a large effusion include Beck’s triad of distended neck veins, low blood pressure and muffled, distant heart sounds. Larger effusions are treated by pericardiocentesis, carefully removing the fluid with a needle.
read more
Load more
Share
Ask Questions
Take Notes
Download Slides
Report Mistake
Comments
show all Show less
My Notes
show all Show less
Learning Material 2
show all Show less
Report mistake
Transcript
0 of 0

00:00 Now, with both these conditions, its leads to decreased filling of the heart. Now, let me break that up for you. 00:07 Remember, the pericardial cavity is being filled pathologically. But in the meantime, what was doing to the heart? It’s restricting it. So therefore, now you tell me, what kind of dysfunction is this? Good, a diastolic dysfunction. 00:25 Because, you can’t fill up the heart. Do you understand that? So you bring in your physiology, you understand the pathology, and ultimately you forgot who your patient is. 00:34 Now, if the filling is so restricting within the heart, ultimately you are going to result in shock. 00:41 Now, what is the definition of shock? You’ve been exposed to numerous types of shocks. 00:46 Dr. Raj shock, no I’m joking. 00:48 You have been exposed to numerous numbers of shocks, this include, cardiogenic shock. 00:53 But what happened? Heart stopped, the heart has decreased cardiac output. 00:57 Maybe its septic shock also called neurogenic shock, what happened there? Wow, there is a Gram-negative organism lipopolysaccharides. Maybe it’s an E.coli, organism from a catheterization, which all of the sudden result in a septic shock. 01:11 And then, you have hypovolemic shock, right? So what’s the common denominator? Upon from the term shock, what is it actually mean? Well, whatever the case maybe, whether be a decrease cardiac op, in this case, due to decrease filling, the tissue is not receiving enough oxygen. 01:26 If its septic shock in microbiology, you know that there, because of the organism, the tissue is not receiving enough oxygen for different reasons that we are not gonna go through here. 01:36 And then, hypovolemic shock, well there, what happened? Got into an accident, perhaps, if there was a laceration maybe your patient was working with the heavy machine and got trapped. 01:48 And then, of a sudden was losing tons of blood. 01:50 Hypovolemic shock, what’s the state of my tissue? It’s starving for oxygen. 01:53 Are you seeing this? So everything that you do in medicine, give it a clinical tagged, and you can never go wrong. 02:00 If you cannot give a clinical tagged, initially, I would just to let it go. And at some point at time, when you’ve got a firm hold of clinical medicine, then you can go in a bit of details. 02:13 Now, cardiac tamponade maybe cause by small amount of fluid. That is huge for you to understand. 02:19 Because up until this point, I’ve been saying, accumulation of fluid. But what exactly does that mean? Accumulation of fluid in a rapid motion or in a rapid manner, would then be a cardiac tamponade. 02:30 It doesn’t have to be a lot of fluid. But a little bit of fluid accumulating within the pericardial cavity. 02:35 Oh, my goodness, tamponade you might be at risk for death. 02:41 What about slowly? Well, if its slow effusion, then that’s not necessarily called tamponade. 02:47 Its just means pericardial effusion and I will show you the comparison between the two in a little bit. 02:53 Large amounts may accumulate gradually is the operative term. You see that, gradually. 03:00 Without causing tamponade, are you seeing the differences? I’ve been hoping on this a few times. 03:07 I’m hoping that’s getting reinforced in your head, if not already. 03:11 If you are thinking about gradual accumulation of fluid, malignancy or – well, take a look of other ideologies. 03:18 But I like for you to think of malignancy. And often times, well, what kind of fluid is accumulating in your pericardial cavity or cavities in general? Okay, so here’s a graph, in which we are comparing acute versus chronic type of accumulation of fluid within the pericardial cavity. 03:37 The first one on your left is rapid effusion. 03:41 So this would be acute rapid accumulation of how much fluid, take a look at the X-axis. 03:47 Remember, I have told you, and you have got into the habit of dissecting a graph into X-axis and Y-axis. 03:54 The X-axis is a horizontal here. And you will notice that this is volume. 03:59 The Y-axis will be the pressure. Now you are focused here, initially for acute, is going to be well, how quickly did volume accumulate? In acute, very quickly. Woow. 04:10 Now, I have reached the limit of pericardial stretch very quickly. But how much volume? Not much, but very quickly. 04:19 And you end up getting into its critical tamponade, in which the patient now is at risk for what kind of dysfunction? Cant filled it up? So therefore, that it might be shock decrease cardiac output. 04:31 Now, granted there is different ways, such as you can have decrease cardiac output. 04:37 This is one of them. What if there is an MI? Well, that’s a different reason for cardiogenic shock. 04:42 If the myocardial infarction, which is the fact there was lack of oxygen, there is ischemia to the heart. 04:47 Dead is the heart. 04:47 Obviously may result to cardiogenic shock. 04:50 Let’s take a look at this and compare it to or chronic. 04:53 And chronic, well here, the critical tamponade region or area, would be one in which it takes more time for the fluid to accumulate in the pericardial cavity. 05:06 Give yourself an example such as malignancy. Give yourself an example for cardiac tamponade such as ventricular wall rapture. 05:16 Ventricular wall rapture. A few times now, we would also talk about rapture. You wanna keep in mind or keep separate. 05:23 Wall rupture versus septal rupture, right? Septal rupture, would result in a VSD type, a systolic hormone. A wall rupture will then result in, rapid accumulation of fluid cardiac tamponade. 05:41 Now here you will notice the critical tamponade region for slow effusion takes a little bit more time. 05:48 These are important comparison so that you clearly distinguish between acute and chronic type of effusions.

The lecture Pericardial Effusion and Cardiac Tamponade: Pathogenesis by Carlo Raj, MD is from the course Pericardial Disease.

Which of the following statements about pericardial effusion is most likely FALSE?

Which of the following statements about cardiac tamponade is most likely FALSE?

Which of the following etiologies is INCORRECTLY paired with the type of shock it will most likely cause?