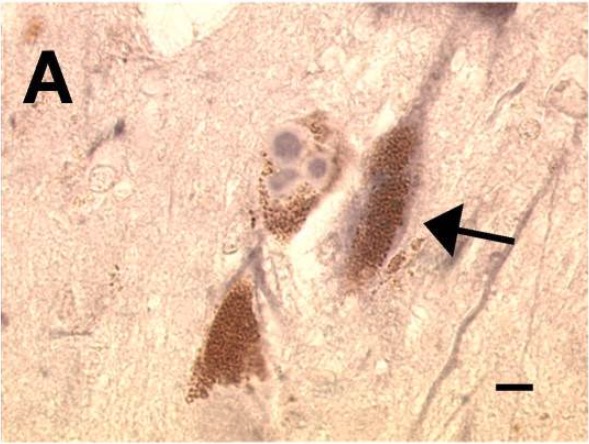 00:01 Here, we’ll take a look at degenerative disease of the basal ganglia. 00:04 And by definition, if the basal ganglia has been affected, you can expect there to be movement disorders including rigidity, abnormal posturing or even chorea, all items that we’ve talked about prior. 00:18 The diseases that are associated with degenerative disease of the basal ganglia include obvious parkinsonism, progressive supranuclear palsy, corticobasal degeneration. 00:29 We’ll talk about multiple systemic type of atrophies and then we’ll end by looking at our postencephalitic type of parkinsonism. 00:41 We’ll begin our discussion of degenerative diseases of the basal ganglia by looking at Parkinsonism. 00:47 The definition of which will be a clinical syndrome characterized by diminished facial expression, and by that we mean a masked facies. 00:55 Expressionless. 00:57 Next, it might be stooped posturing and if you take a look at the hands, there’s resting tremor and there is this pill-rolling that’s taking place. 01:06 Literally, it looks like they’re pill-rolling. 01:09 Now, let’s talk about this gait. 01:11 Well, at first, the gait here, the feet feel as though for the patient that the feet are stuck in cement or quicksand. 01:19 So therefore, very difficult to start the initial step or gait. 01:25 Once the gait has now begun or commenced, then it’s almost like the patient is now taking these petite march or a little march. 01:34 Little steps to gain, to gain momentum. 01:37 So you have these little steps that are being taken by the patient, which are now in accelerated fashion. 01:43 We call this a shuffling gait. 01:45 We call this a Parkinson gait and this is then known as your festinating gait. 01:52 And we talked about the pill-rolling and we talked about the posture. 01:56 Now, parkinsonism, remember that it’s the dopamine for whatever reason that is now being diminished. 02:02 And it will be a damage that’s taking place to the nigrostriatal dopaminergic pathway and nigro- of course referring to the dark nature that you would find in the substantia nigra and the less of that nigra or darkness that you find, this would then correlate to the amount of dopamine that is also being diminished or lost. 02:28 Here, we’ll take a look at idiopathic Parkinson disease. 02:31 It’s progressive parkinsonism and the absence of toxic or any other real underlying issue. 02:39 The classic features: Well, we talked about the resting tremor. 02:42 Bradykinesia, rigidity, and by that we mean, cogwheel rigidity, Postural instability. 02:49 Masked facies, expressionless as we talked about. 02:52 And then at some point in time, unfortunately, dementia may set in. 02:56 The pathogenesis: well, we said that referring to the substantia nigra and if that nigra portion, meaning to say that dark entity or feature that you’d find that represents the supply of dopamine starts getting lost, that means your dopamine supply is also being lost resulting in abnormal movement. 03:18 Predominantly sporadic, although well-recognized familial cases have also been shown. 03:23 Acute Parkinson’s syndrome and destruction of neurons in substantia nigra follows exposure to something called methyl-phenyl-tetrahydropyridine, MPTP. 03:35 Also been known to perhaps accelerate the presentation of Parkinson's. 03:41 The clinical pathology that you’d find with idiopathic Parkinson disease, as you can imagine, instead of having that nigra, you have pallor of the substantia nigra and locus ceruleus. 03:51 Microscopically, the loss of pigmented catecholamine neuron associated with gliosis. 03:58 And, well, once upon a time, the second most common cause of dementia in the U.S. is a condition known as Lewy body dementia. 04:08 And at that time, when I showed you Lewy body, I told you within that Lewy body, there’s something called synuclein. 04:16 Well, please understand that you could find Lewy body here in Parkinson’s as well. 04:20 Can you give me one clinical pearl that you’ll find with Lewy body dementia that you may or may not see with Parkinson disease? And you should be thinking about ha-Lewy-cinations with Lewy body dementia. 04:33 Now, with Parkinson, you will also find Lewy body, intracytoplasmic, eosinophilic, round to elongated inclusions that often have a dense core surrounded by a pale halo. 04:44 I’ll show you the picture once more. 04:48 The picture that you see here is a Lewy body, and within it, you see this circular eosinophilic structure. 04:55 That is particular referring to your synuclein, something that we also pointed out to you or that I pointed out to you, in Lewy body dementia. 05:07 Let’s talk about the management, please, of Parkinson disease. 05:11 Well, in essence, what are trying to do here? You want to try to either slow down the deficiency of that dopamine, or maybe perhaps even replace the dopamine itself. 05:22 And you think about the nigrostriatal type of pathway and all the different ways in which dopamine can be delivered to it. 05:29 This is something that you talked about in pharmacology. 05:31 Please keep in mind that whatever dopamine that you’re able to swallow orally, you want to try to inhibit the enzyme in the stomach so that you can properly deliver the dopamine up into the brain because that’s where you want this, don’t you? Let’s take a look. 05:45 So dopamine cannot cross the BBB. 05:48 It cannot cross the blood-brain barrier. 05:51 L-Dopa is the most effective treatment. 05:55 L-Dopa can be converted into dopamine in the brain, even if the dopaminergic neurons are dying. 06:01 That’s something that you want to keep in mind. 06:04 Now, a dopamine agonist can also be used for the following: Less potent than L-Dopa. 06:09 Less motor side effects. 06:11 And more cognitive behavioral side effects such as hallucinations that might be taking place, and by that, we mean the following: Remember that Parkinson’s disease is a deficiency of dopamine. 06:22 On the other end of the spectrum, if there was excess dopamine, then obviously we are now referring to psychosis. 06:28 Interesting, isn’t it? Your focus at this point, in this particular section, is levodopa.

The lecture Parkinson's Disease by Carlo Raj, MD is from the course Movement Disorders. It contains the following chapters:

A 56-year-old man presents to your clinic with a difficulty maintaining his balance and posture. He does not have any medical conditions. A physical examination reveals a tremor in his hands. He walks with a stooped posture. Which additional feature is most likely seen in his condition?

You are the chief pathologist handling the autopsy of a deceased patient who died from Parkinson's disease. The pathological specimen shows a pallor of the substantia nigra and locus ceruleus, along with gliosis and a loss of pigmented catecholaminergic neurons. A microscopic examination reveals eosinophilic intracytoplasmic inclusions and a pale halo around them. Which of the following would be more suggestive of Lewy body dementia than Parkinson's disease?

A 70-year-old man with a history of Parkinson's disease comes to your clinic for a follow up visit. His daughter who accompanies him says that he has been on levodopa for the last 10 days and his symptoms are not improving. She requests for a different medication. You explain to her that it is advisable to continue levodopa because switching to a different medication is less effective and associated with adverse side effects. What is the mechanism of action of this second drug and the side effects that you are concerned about?

While performing a neurological examination in a patient with a history of Parkinson's disease, you notice slowness of muscle movement along with rigidity and resistance throughout the passive range of motion. What are these symptoms called?