Other Forms of Anesthesia – Anesthesiology Basics 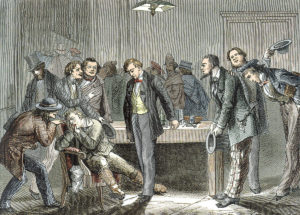 Introduction and History of Anesthesiology
In any human endeavour within the realm of faith, philosophy or science, history shows that new concepts are rarely accepted and applied. Many innovations in physiological condition are surely falling into this category. Dr J. Leonard Corning, a medical specialist, was the first man who provided a spinal anaesthetic in 1885. There are very little documents showing this claim because Corning never mentioned CSF. His intention was to inject the hard drug into the neighbourhood of the funiculars. However, that attempt of CSF wasn't seen on body parts where the needle is inserted.
read more
Load more
Share
Ask Questions
Take Notes
Download Slides
Report Mistake
Comments
show all Show less
My Notes
show all Show less
Learning Material 2
show all Show less
Report mistake
Transcript
0 of 0

00:00 Other forms of anesthesia that have developed, include regional anesthesia, which developed as local anesthetics were created. 00:07 And one of the first people involved in this story was Sigmund Freud, who thought that cocaine would be both a useful medication and felt that it would be particularly useful in the treatment of depression. And unfortunately, Sigmund Freud had to withdraw this belief in a later period, because one of his best friends, who was a very famous American surgeon, became addicted to cocaine and died from its use. In any case, the use of cocaine and other simple local anesthetics, led to the development of spinal and epidural anesthesia. And we can now provide complete loss of sensation to many parts of the body, and particularly the limbs, for surgery. 00:55 Spinal anesthesia is the commonest form of anesthesia for cesarean sections for instance. Whereas epidural anesthesia is useful for pain relief during labour, or after certain types of surgery. 01:07 Spinal anesthesia is often used for surgery of the legs. With modern ultra-sound equipment, it's now possible to pass a needle directly to a nerve without perforating the nerve or hitting blood vessels under direct vision using ultra-sound. And this has revolutionized the use of regional anesthesia over the last five to ten years. Anesthesia is an extremely safe medical specialty. It's one of the safest interventions in modern medicine. 01:37 My practice started in 1980. At that time, people used to die on the operating room table. 01:43 In 2014, it's extraordinarily rare for this to happen. 01:49 In developed countries, the mortality rate from general anesthesia is usually stated to be around 1:10,000 or maybe as high as 1:20,000. The rate is much lower however in young, healthy individuals. Also in developed countries, the rate of permanent neurologic damage from spinal or epidural anesthesia is less than 1:100,000. So, in a career, most anesthesiologists will never see this happen. So our lecture series is going to be laid out like this: an introductory lecture, which you're hearing now. A lecture on physiologic aspects of anesthesia, drugs used in anesthesia and anesthetics systems. We'll then move in to the more clinical aspects of the specialty and talk about general anesthesia, regional anesthesia, emergencies in the operating room, intensive care of patients, pain management and anesthesia for special population, such as the pregnant patient, children, thoracic anesthesia, neuro anesthesia. And then, at the very end, we'll summarize everything and we'll have a short discussion about anesthesia and its use in other medical disciplines and the future of anesthesia and some of the opportunities for young anesthesiologists opening into the future. So in this lecture, we've summarized the history of anesthesiology and given you a bit of an overview of what general anesthesia and regional anesthesia look like. We're going to go into a great more detail in the subsequent lectures, and I hope you join us for those.

Which of the following was first used as a local anesthesia?

Which of the following most accurately reflects the mortality rate from general anesthesia in developed countries?

Author of lecture Other Forms of Anesthesia – Anesthesiology Basics

interesting and good .History of Anesthesia and about anesthesia.helpful for exam.

Brief Overview
By Amanda B. on 06. March 2018 for Other Forms of Anesthesia – Anesthesiology Basics

interesting and good .History of Anesthesia and about anesthesia.helpful for exam.

Brief Overview
By Amanda B. on 06. March 2018 for Other Forms of Anesthesia – Anesthesiology Basics