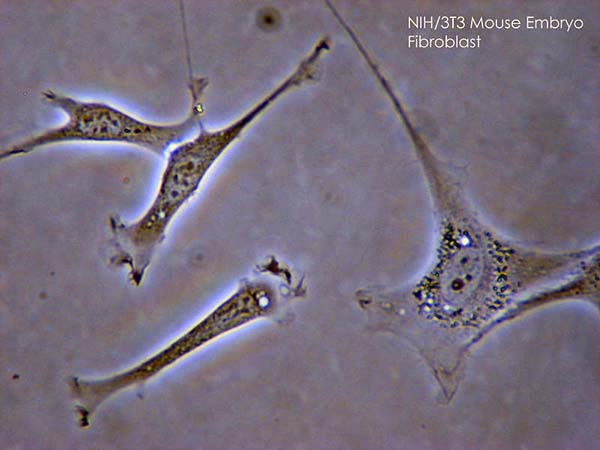 00:01 Sometimes it is important to understand at this level before we look at some of the organ systems later on, that connective tissue elements in certain locations often get called special names. We know about the lamina propria and I am going to emphasise the lamina propria a lot because it is so important when we look at all sorts of tissues and all sorts of organs. But here is a section of an organ that happens to be the testis, part of the male reproductive system. And you can see a bright pink or red capsule around the testis. Most organs have a capsule full of collagen. 00:49 That collagenous capsule is also around lots and lots of other organs, to separate the organs from each other. 00:56 So when you hear the word capsule, think of collagen. Sometimes organs are separated by capsules on the outside and that connective tissue of that capsule, the collagen can invade into the organ, in this case a gland, and divide the gland up by having connective tissues septa or sometimes that word trabeculae is used. And those septa carry in blood vessels and nerves. Sometimes we can look at a gland. Here is a gland, some mucous secreting gland and the connective tissue could be called stroma, whereas we refer to the secretory components of the gland as being the parenchyma. In this image, it happens to be a mucous secreting component of the gland. You can see the clear stained cytoplasm reflecting that some of the mucous is being lost during normal processing and you can see the nuclei of the cells squashed up against the base of the cell. So parenchyma and stroma are common terms we use when we are looking at glands. The stroma is the very fine connective tissue wrapping around parenchymal cells and also the very fine duct system you see here as well. 02:24 Let's look at the extracellular constituents of connective tissue, the fibres. Well there are three different sorts of fibres. The collagen fibre, I've mentioned. It is the most dominant fibre. It is the most abdundant. It is very very strong. Now collagen is actually the fibres are made up of collagen molecules. Those collagen molecules are made up of a helix of alpha chain of polypeptides. Those alpha chains of polypeptides levels have also embedded in them, sugars. So collagen is actual fact is really is a glycoprotein. Now those polypeptides can be made up of up to 600 to even 3000 or so different amino acids. And because of that, there are many different sorts of collagens. I will refer to collagen type I, type II and type III during most of this course in histology. Think of collagen type I as being like a very thick rope. A rope that might tether a boat to its mooring. Collagen type II is a thinner rope. A rope you might use for climbing or swinging, whereas collagen III fibres are just like of piece of string. So these really means that the three types of collagen are different in their size and in their strength, and we will see that certain tissues of the body such as tendon and fibroid cartilage that need to resist very compressive forces or have very very high tensile strength have collagen type I in them. Whereas very fine reticular fibres have collagen type III in them. Elastic fibres are different. 04:37 They are very branched. And in this slide, it is very difficult to tell the difference between elastic fibres and the collagen. In most H&E sections, the elastic tissue appears as a translucent fibre running through the tissue, but in certain instances, you can use certain stains to show up these elastic fibres. They are branched. They form a network throughout the collagen. 05:07 In this case, it happens to be in the wall of the blood vessel that we will talk about later on in another lecture. The reticular fibres are very fine fibres and they contain a lot more sugars in them than the collagen fibres and the elastic fibres. And so, different stains like the periodic acid shift reagent and also silver stains enable us to see these very fine reticular fibres. In this image, you see the dark stained reticular fibres and in the background, you can see lots and lots of little pale stained nuclei. This is in a lymph node. Reticular fibres are dominant in lymphoid tissues, and these fibres are secreted by reticular cells. And these reticular cells cover the reticular fibre and as we learn later on, these reticular cells are very very important in how the lymph node behaves and challenges and reacts against a pathogen or an invading antigen. So at the top, it is very difficult to tell the difference between collagen, between elastic tissue and between smooth muscle. But thankfully histologists have come up with different ways of distinguishing these sorts of fibres.

The lecture Other Common Named Locations by Geoffrey Meyer, PhD is from the course Connective Tissue.

Which of the following statements about stroma and parenchyma is MOST ACCURATE?

Connective tissue fibers are produced by which of the following cells?

Which of the following types of collagen has high tensile strength and is most abundant?

Lymphoid tissue is dominated by which type of fibers?