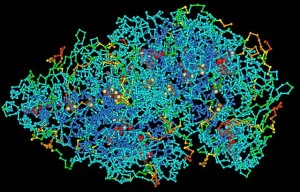 00:00 Now, let’s move on to look at nucleic acids. 00:03 Nucleic acids are DNA and RNA. 00:07 Recall the monomers we call nucleotides. 00:10 In order to establish how DNA is put together, we need to take a closer look at the nucleotide itself. 00:17 There are three components. 00:19 There’s a five carbon sugar which is called ribose and then, we have a nitrogenous base as well as a phosphate group. 00:26 First, let’s look at the ribose sugar. 00:29 It has five carbons. 00:31 They’re labelled number one through number five. 00:33 You’ll notice that the number one carbon has the nitrogenous base attached to it and the number two carbon has either an OH group or an H group, depending on whether we’re dealing with RNA or DNA, that’s the only difference. 00:49 The three prime carbon has a particularly important group. 00:53 That’s the OH group. 00:55 You’re going to see that this is important in how each of these nucleotides attach to each other. 01:01 Recall that whole dehydration synthesis thing. 01:04 So then on the five prime carbon which is up on the top stick, you’ll see that there’s a phosphate group. 01:11 So the labelling of these three prime and five prime carbons are particularly important. 01:17 So again, on the one prime carbon, we have our nitrogenous base. 01:21 The nitrogenous base could be an adenine, a guanine, a cytosine, or a thymine, or a uracil if it’s RNA and on the five prime carbon, we have that phosphate group. 01:32 Again, there’s a polarity in this molecule where we need to know the five prime carbon distinctly from the three prime carbon with the OH group on it. 01:41 So how did these come together? Well, it’s our friend, dehydration synthesis again. 01:48 We have a covalent bond forming between the three prime OH and the five prime phosphate group on the next nucleotide. 01:56 So an OH comes off the phosphate and H comes from the sugar, we form water, and so we have a covalent bond which we call a phosphodiester bond when it’s in nucleic acids. 02:10 There are five types of nitrogenous basis. 02:16 There are the purines which are double ring structures that we see here are adenine and guanine. 02:24 There are also pyrimidines which are single ring structures. 02:28 You’ll notice that those are cytosine, thymine, and then, uracil when we’re dealing with RNA. 02:36 Now, how do we keep these distinct from each other? It could be hard to remember but I have the rule of Y’s, P-Y-rimidines, Pyrimidines belong with cytosines, C-Y-tosine, and T, thymine, alright? And so, the rule of Y’s helps us keep pyrimidines together. 02:55 Uracil, we know replaces thymine when we’re dealing with RNA, and so we can keep that in the group with pyrimidines also. 03:03 Now, how do you know which ones are single ring versus double ring? Well, pyrimidines is a longer word than purines and so the larger ring structure goes with the smaller word, it’s opposite. 03:16 The larger word goes with the smaller ring structure. 03:20 That’s how I keep it straight anyway. 03:23 So moving on, we have our monomers which are the nucleotides. 03:29 We have the polymer which is the nucleic acid and then, we have another N word, the nitrogenous base. 03:38 So I kind of keep those in scale of thinking about an outline where we have the nucleic acid, a long word. 03:46 We have the nucleotide and then, at a next level down, the nitrogenous base. 03:53 I kind of imagine it like a step and sort of memorize that in your mind to keep them up straight. 03:59 So when we put these together, we start seeing a chain and I had introduced to you that the five prime end and the three prime end are pretty important. 04:10 So we are going to call the five prime end, the end with the phosphate hanging out because that’s on the five prime carbon, and the three prime end is the end with the three prime OH group hanging out. 04:23 Very important as you’re going to see later when we talk about how DNA makes copies of itself during cell duplication.

The lecture Nucleic Acids by Georgina Cornwall, PhD is from the course The Macromolecules of Life.

Nucleic acids are the polymers of…?

The nucleotide monomers are covalently joined by ______ to form a strand of nucleic acid.

Which of the following is a MISMATCH regarding the nucleic acids?

What does the term polarity mean with regards to nucleic acids?

(1) 5,0 of 5 stars
This lecture is the best for medical student.I found it so useful in molecular biology and genetics and also so studying cardiov
By Damilola A. on 12. December 2017 for Nucleic Acids

The lecture were short and concise and were just thesame as what I needed to learn.

(1) 5,0 of 5 stars
This lecture is the best for medical student.I found it so useful in molecular biology and genetics and also so studying cardiov
By Damilola A. on 12. December 2017 for Nucleic Acids

The lecture were short and concise and were just thesame as what I needed to learn.