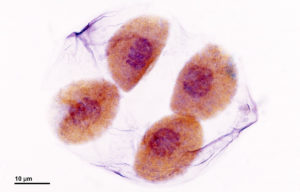 Nondisjunction — Definition and Examples
Nondisjunction connotes the failure of the separation of homologous chromosomes during cell division. It has significant repercussions and is culpable for a large share of chromosomal anomalies like aneuploidy and various hereditary syndromes. With a brief introduction to the basic structure of a chromosome and characteristics of nondisjunction, this article focuses on clinical implications of the same.
read more
Load more
Share
Ask Questions
Take Notes
Download Slides
Report Mistake
Comments
show all Show less
My Notes
show all Show less
Learning Material 2
show all Show less
Report mistake
Transcript
0 of 0

The lecture Nondisjunction by Georgina Cornwall, PhD is from the course Chromosomal Disorders.

Which of the following is NOT a type of chromosome based on centromere location?

Where are the centromeres located in the submetacentric chromosomes?

What is the fate of most embryos with chromosomal abnormalities?

Which of the following is mainly responsible for aneuploidy in a fetus?

Why is non-disjunction more likely in females than in males, according to one of the hypotheses discussed in the lecture?